Forgive the massive pic dump. Today was a huge day, and we got a TON done. Found a bunch of undocumented issues that we had to work around, but in the end, we were triumphant.

The “go-to” fueling solution for the 01+ swap into an NA is to use a 1999 fuel rail and the NA Fuel Pressure regulator so it’ll work with the stock return lines, as opposed to the NB’s returnless fuel system. The first we were going to have made itself evident fairly straight away. The fuel feed line was interfering with the mount for the stock VTCS solenoid (I’d already deleted the VTCS). Fortunately, the fuel lines are super soft metal, and a quick, careful bend on the vise got me the clearance I needed. This will become a running theme. 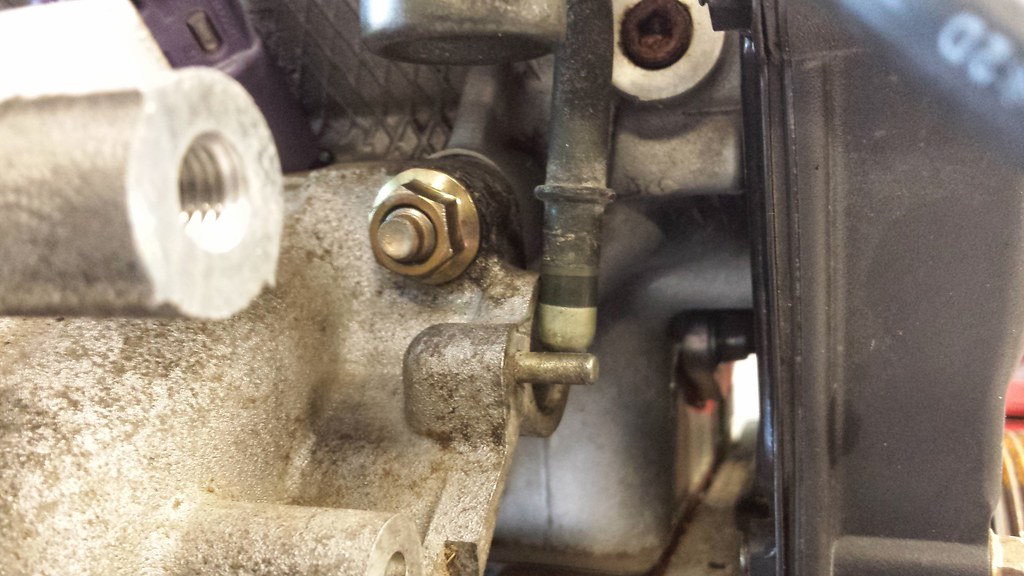 Up next was figuring out the FPR side of this. The 1.6L FPR was interfering directly with the air-space that the upper intake manifold wanted to be in. Another gentle, careful bend on the vise got it where it needed to be. It’s not very pretty, pointing straight up, but it works. For future posterity, the part number to convert the Mazda ‘quick release’ (maybe if you have the tool, I don’t) fuel line to a standard barb fitting is Dorman 800-116. 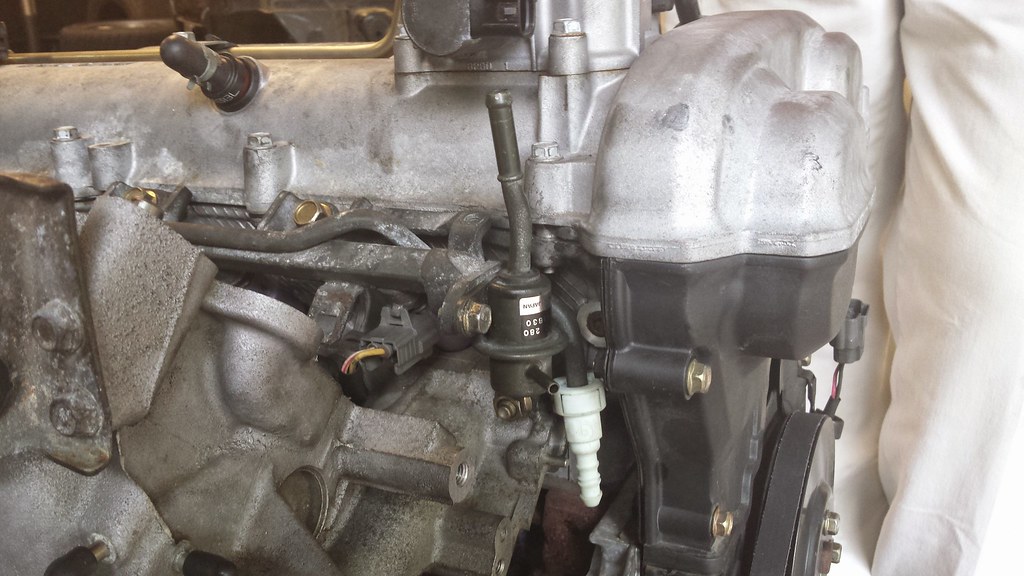 The next issue was getting the BeGi reroute spacer spacer to fit. The retainer for the cover on the back of the exhaust cam was getting in the way, so I cut the bottom half of it off and got the clearance I needed. 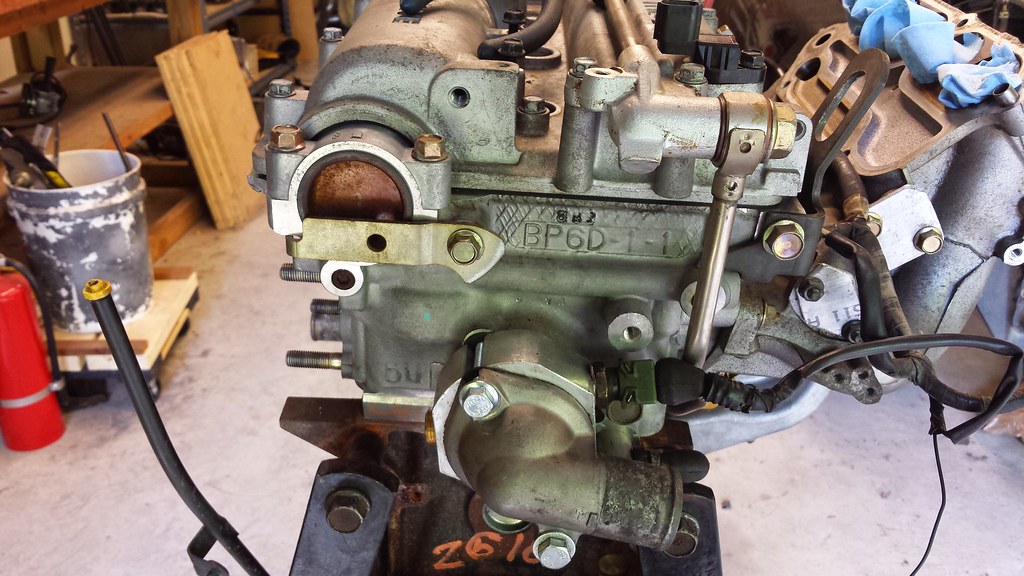 The final fitment issue was the upper intake manifold now interfering with the feed tube on the 99 fuel rail. I hit the manifold with a dremel and a sanding wheel, and carefully ground a little at a time until I could see daylight between the manifold and the rail with the bolts snugged down. It took several tries, simply because I didn’t want to take too much material off. 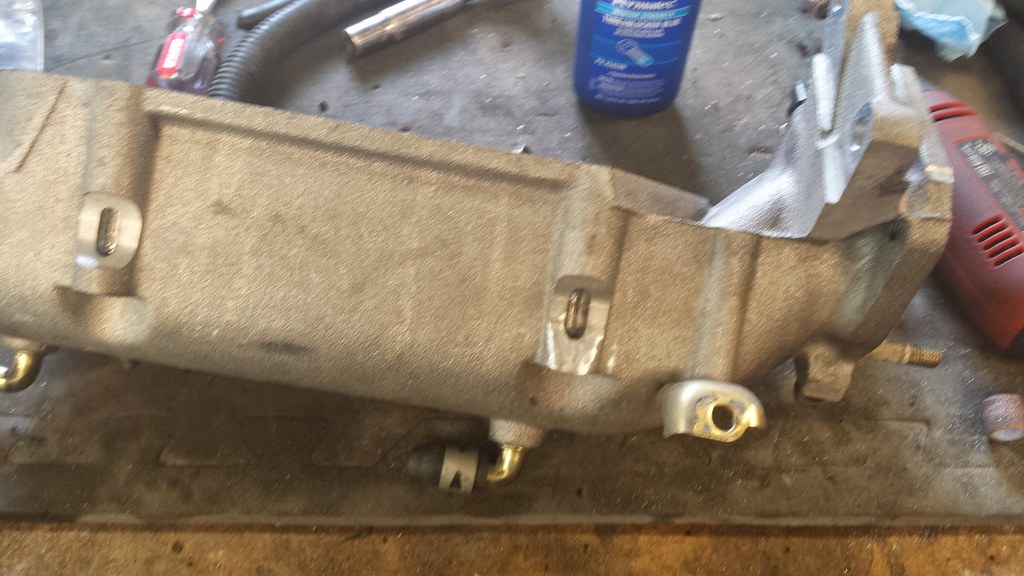 Once we got done with those small, but time consuming issues, it was time to start actually putting things to right. Here’s the vac line routing from the FPR. I threw on some loom cover to protect it from chafing on the bottom of the throttle body mounting plate. 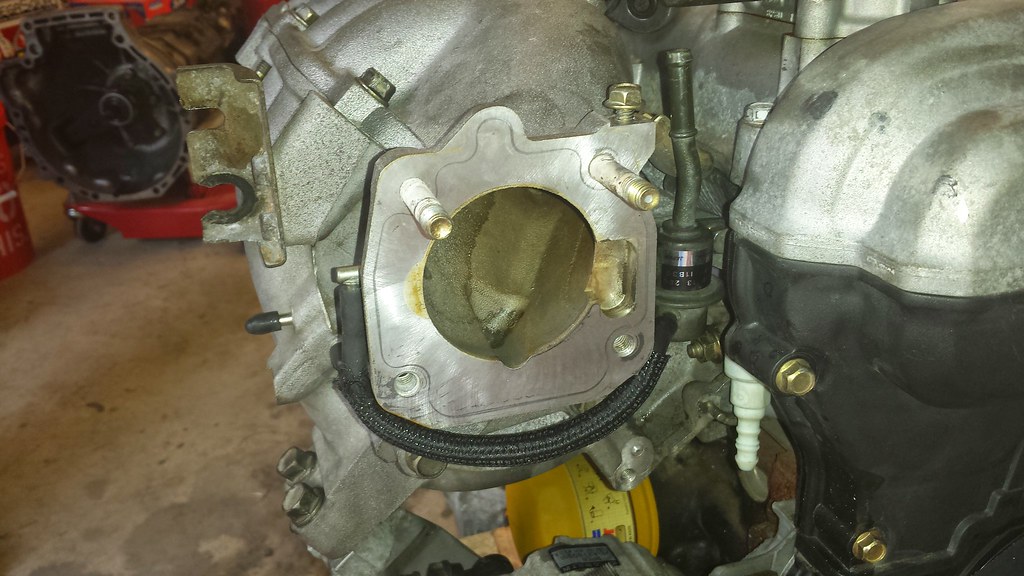 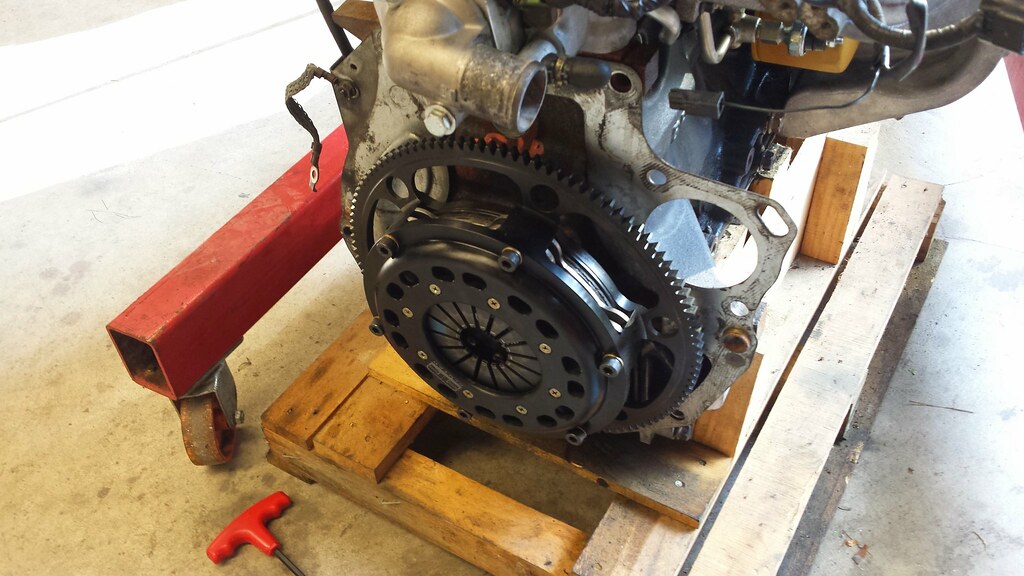 We went ahead and ran fuel and coolant hoses run while it was still out of the car for convenience sake, but otherwise ready to slide tab A into slot B. 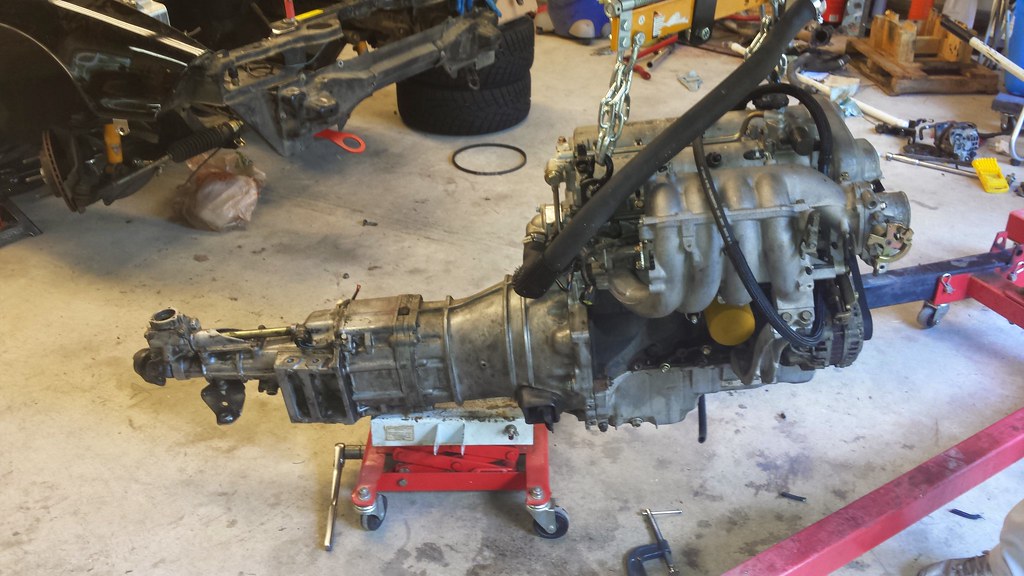 Finally in! No pics of the process because it was an all-hands-on-deck affair. I had to re-learn tricks on how to line up the motor mounts, as the tricks I know for the NA mounts don’t work for the wider / longer NB mounts. It took a little time, but once I figured out that both mounts needed to be in place in the chassis, loosely, and then the engine slid into place, we got it done. 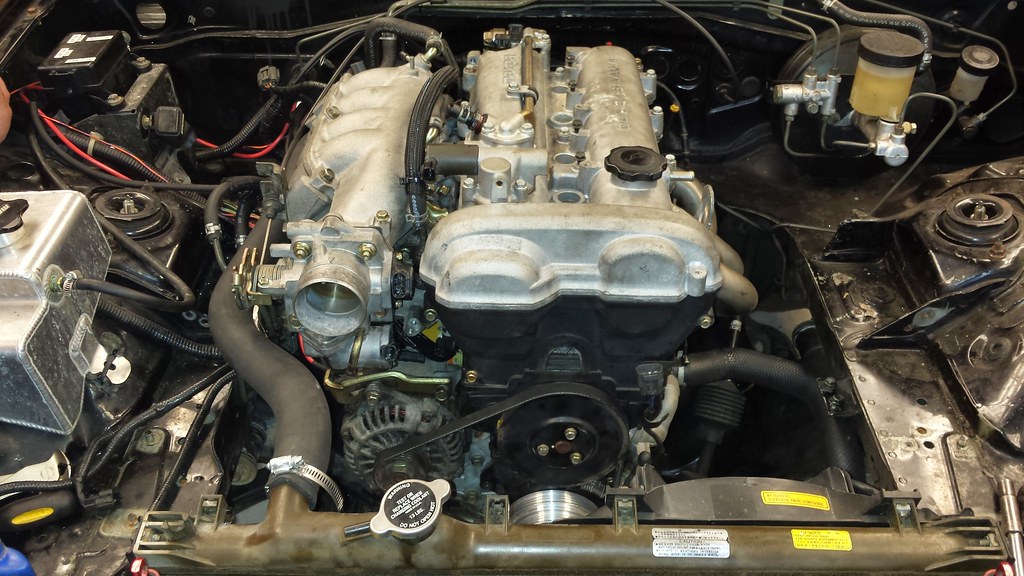 More loom over the fuel hoses to prevent chaffing of those. Because that would be bad. I’m really not a huge fan of how that FPR forces the fuel hose to be run, but it’s field expedient, and will probably be fixed with a new fuel rail w/ a remote pressure regulator. 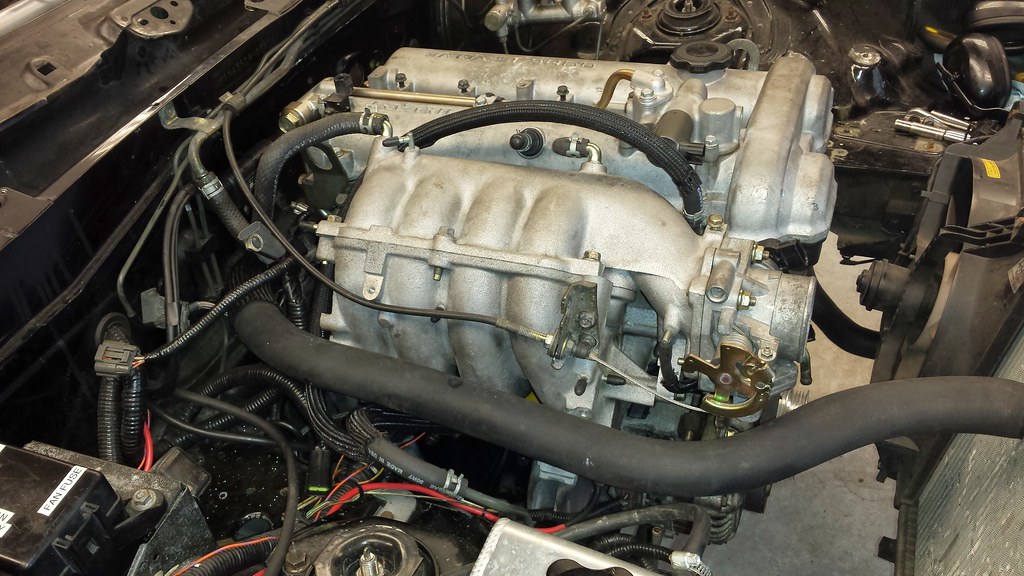 Installed the Jackson Racing header and a custom intake. The JR header actually doesn’t look too bad in the picture, but it’s a real POS, barely a step above eBay specials IMO. The welds are awful inside and out, the flanges are huge and ugly… I’m happy I got it used for very little money. The EGR bung was deleted by cutting & welding. 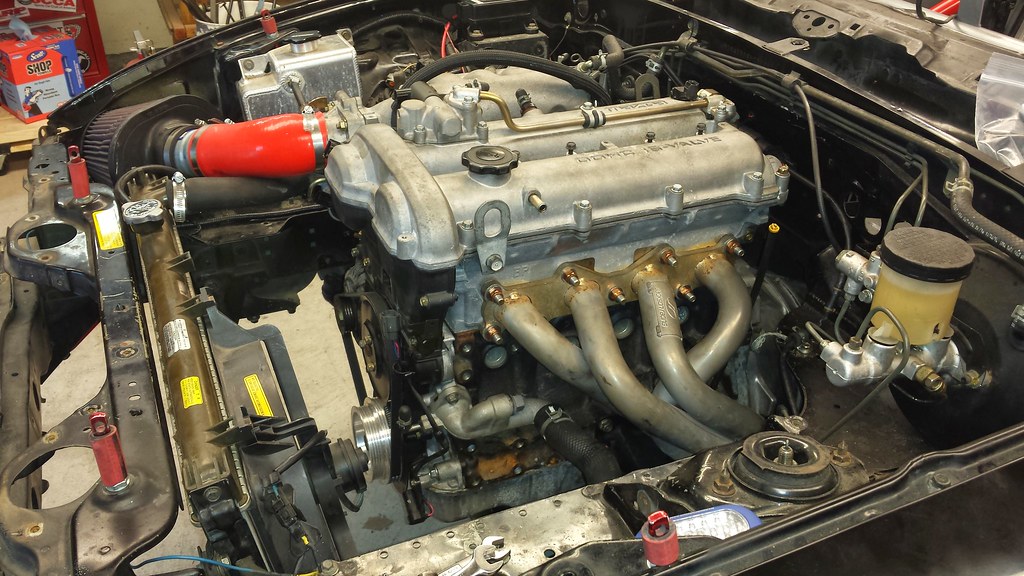 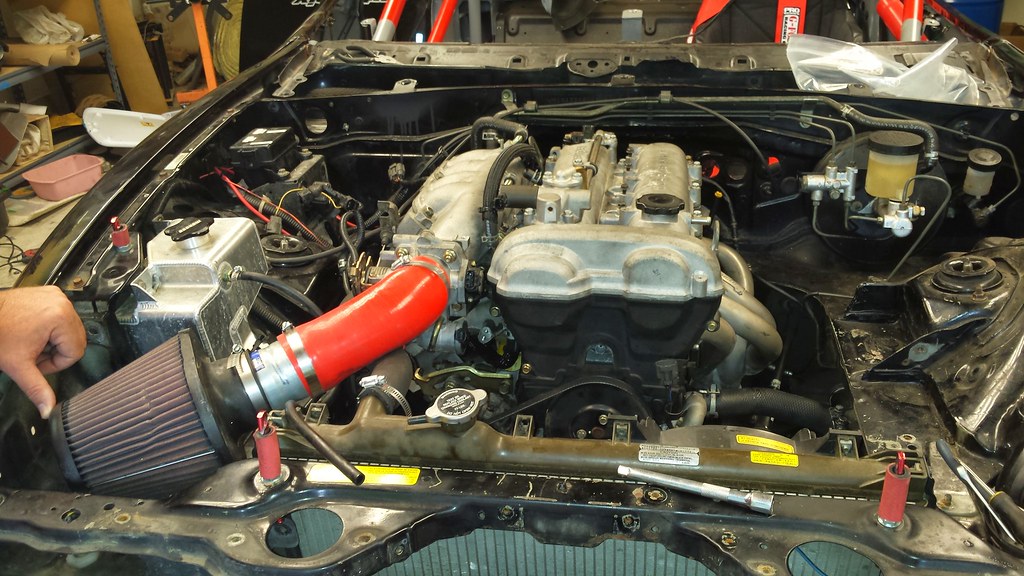 Added some go faster parts from JamesCH. I didn’t think I’d actually like the pool ball shifter, but it feels SO right in the hand, so it’s staying, and the Nardi Touch of Class wood-grain knob is going up for sale. 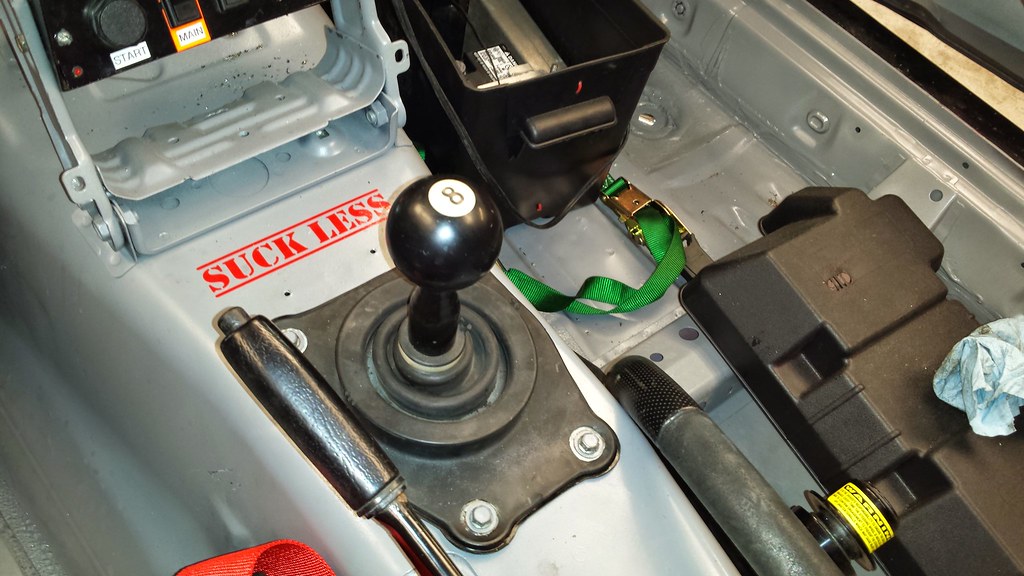 There are still a few big jobs to do: wiring modifications, a new throttle cable (the NA cable is 2″ too long, you’ll need an NB2 cable for this swap), a different ECU to run the VVT, tuning, etc, but the literal heavy lifting has been completed.