…wherein our intrepid hero realizes he’s a dumbass. And that just because it fits, doesn’t mean you did it right. So, when we left off, the mid-pipe was done, fitted, and painted. And from underneath, it looked pretty good! However, with the light of a new day, and looking at it from a slightly jauntier angle, it became painfully apparent that something had gone very wrong. 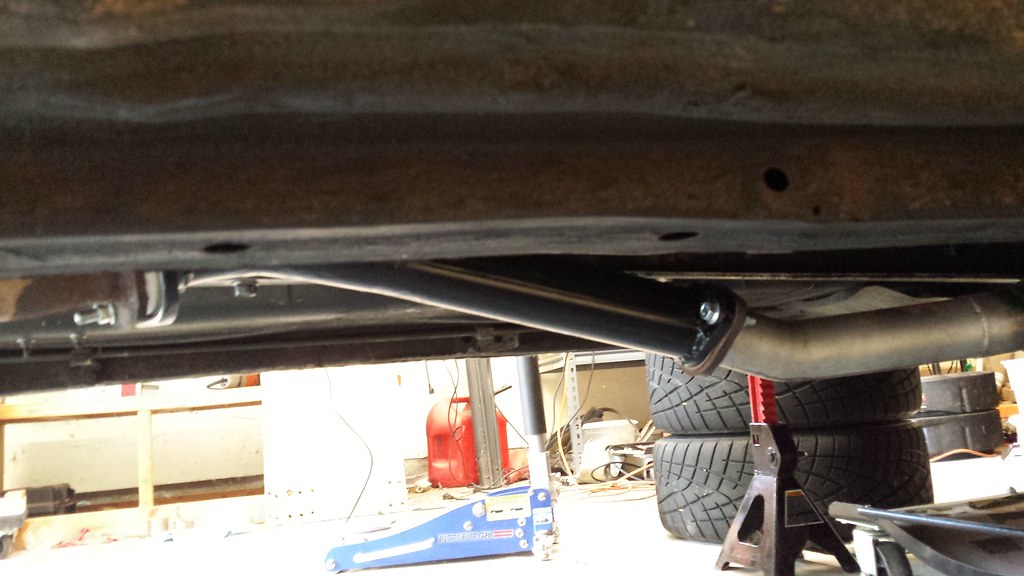 The cat-back is NOT supposed to sit that low. At all. And bad things can happen. Exhaust to asphalt interference. It appeared that at some point very early on in the build, I had shoved the cat back out of the way, and instead of swinging back into position, it stuck in place. Balls. There wasn’t really anything for it except to make more sparks fly. After a bit of a fettle, I got the original tubing oh so close… but oh, OH so far. This? This is crap. Even I know that, and I suck at this. 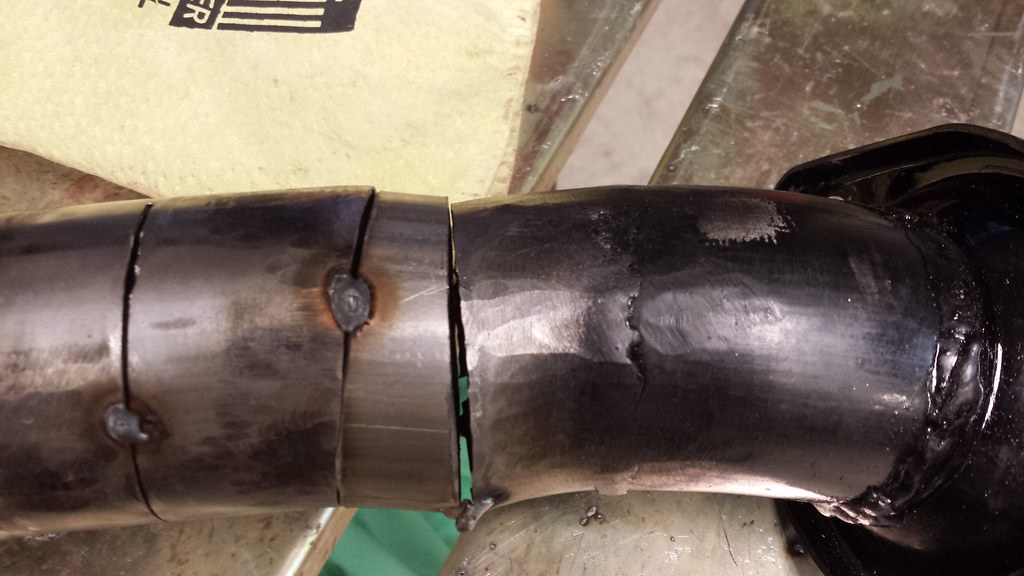 Nothing I was ever going to do was going to make those 2 bends (1 of which was going the wrong direction) line up in a satisfactory fashion. So out came the cutting tools… again… and the section on the flange portion, which thankfully had 1 of the ugliest welds I’ve made to date, got lopped off and replaced with a straight section that fit much better. Finally, this pain in my @$$ was approaching what a loving mother might call “decent.” 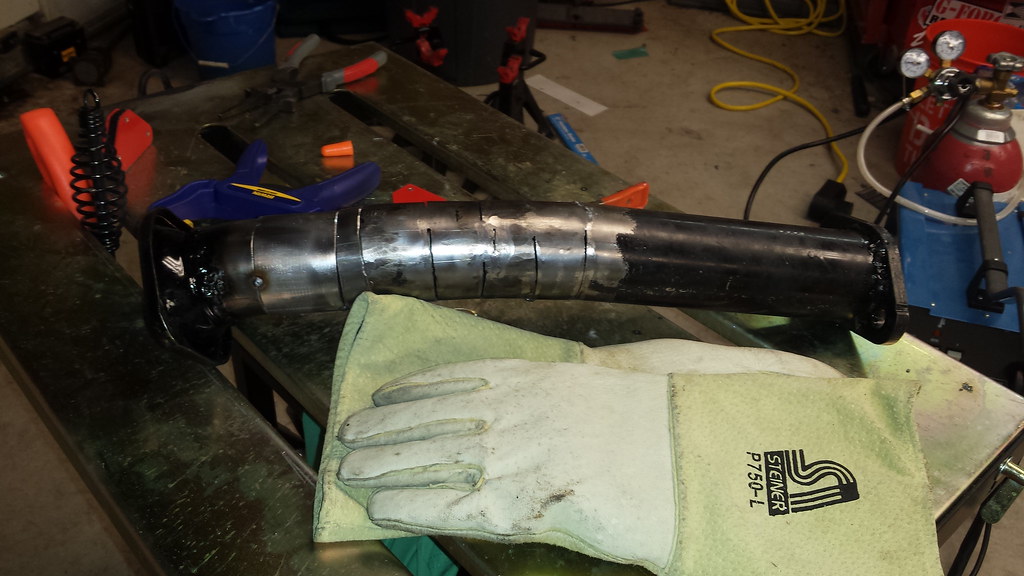 The welds… still aren’t pretty, but I took a lot of lessons from the last go-round, and took a lot more time doing it. Yeah, it still has some boogers, and yeah it still needed a good bit of grinding, but it needed far less than version 1.Fail. 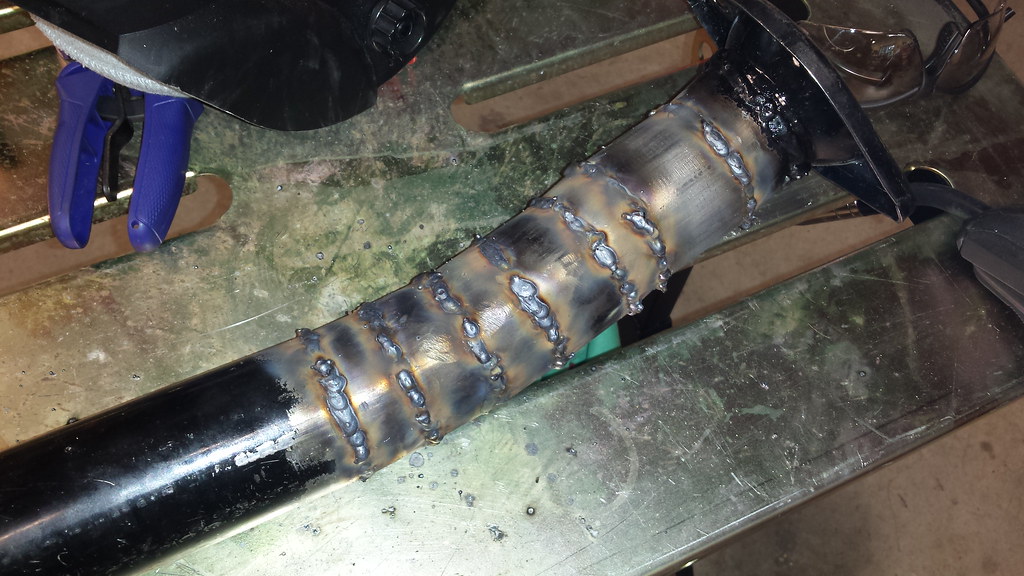 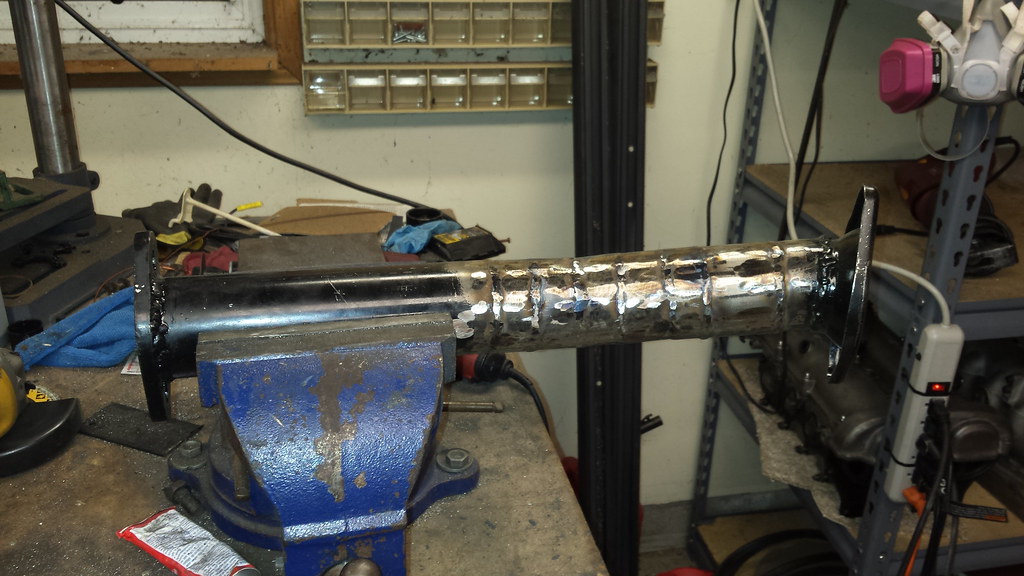 This time, I even bought some paint. The last effort I used a can of high-heat black that had been kicking around the shop. The rest of the exhaust was either raw or silver, and small stuff like that bothers me, it’s my build I can do what I want you’re not the boss of me! So, some high-heat Aluminum went on instead (it’s far more grey, with the flash it looks nearly white): 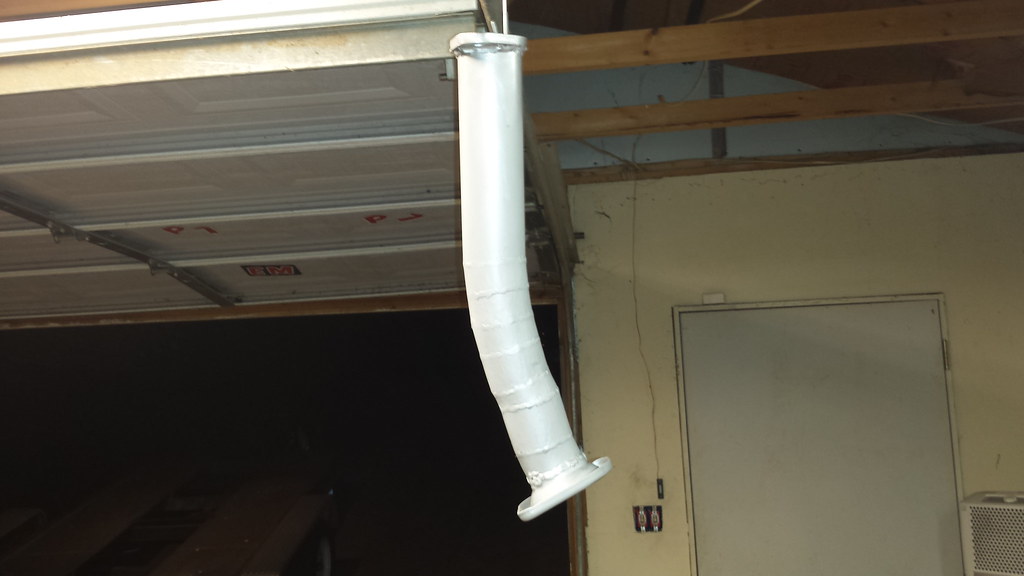 And now, to compare to the first picture in this entry: 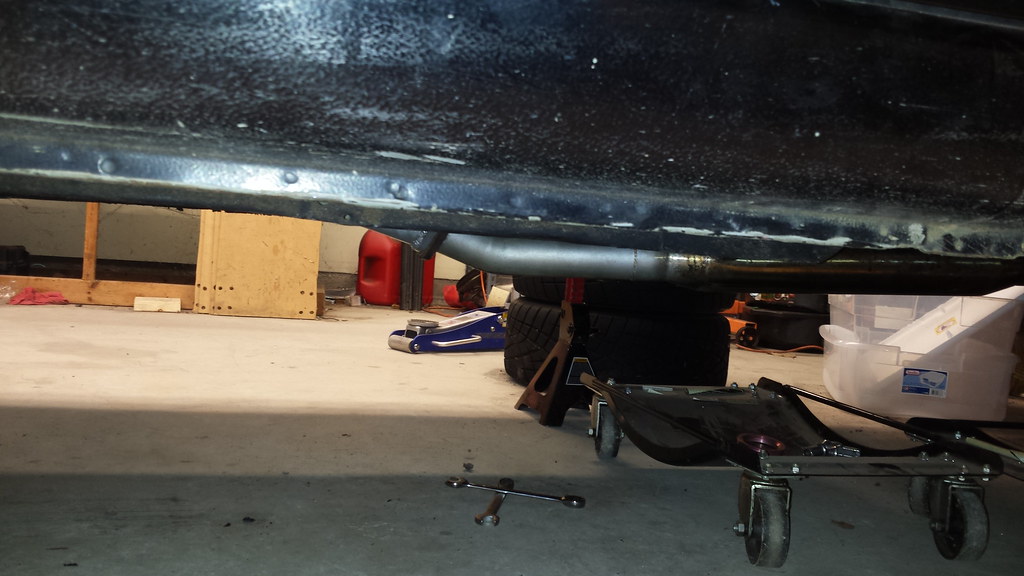 Much better. I’m not sure why all the aftermarket exhausts hang like that, and if I ever make my own, it’ll eliminate that dip, but that’s a massive improvement in fitment. And THAT, I’m actually pleased with.

Going into the 1.8 swap project, I knew that I’d need to do a bit of welding on the exhaust. It was at that point that I decided to use the welder a bit more fully, kick the flux core stuff to the side and go straight MIG, which my welder was capable of. However, I was under the impression that the only thing needed to mate an NA “cat” / cat-back to an NB header was to change the flange angle. What I didn’t know was that there is also a nearly 4″ difference in length between the “cat” (quotes because my cat’s long gone) on the NA & NB, so a bit more work would be needed than was originally advertised.

Time to strap on my big boy pants and go to work, and actually fab something from the raw materiel, something I hadn’t really done in earnest yet, and definitely not anything requiring a welder. 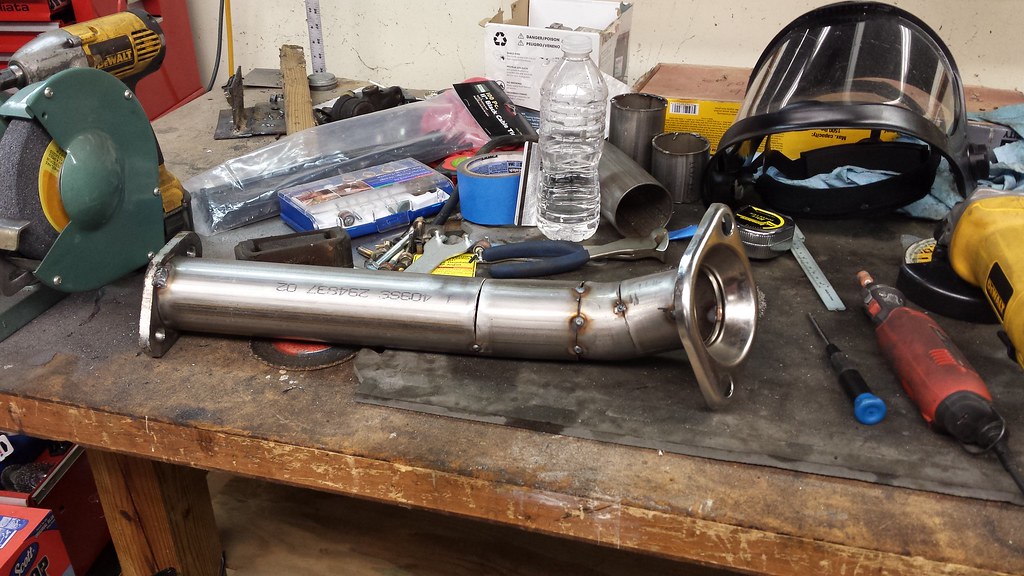 Taking some friendly advice, I used an arbor plate from my press to make a backing plate for the flange so it wouldn’t warp. 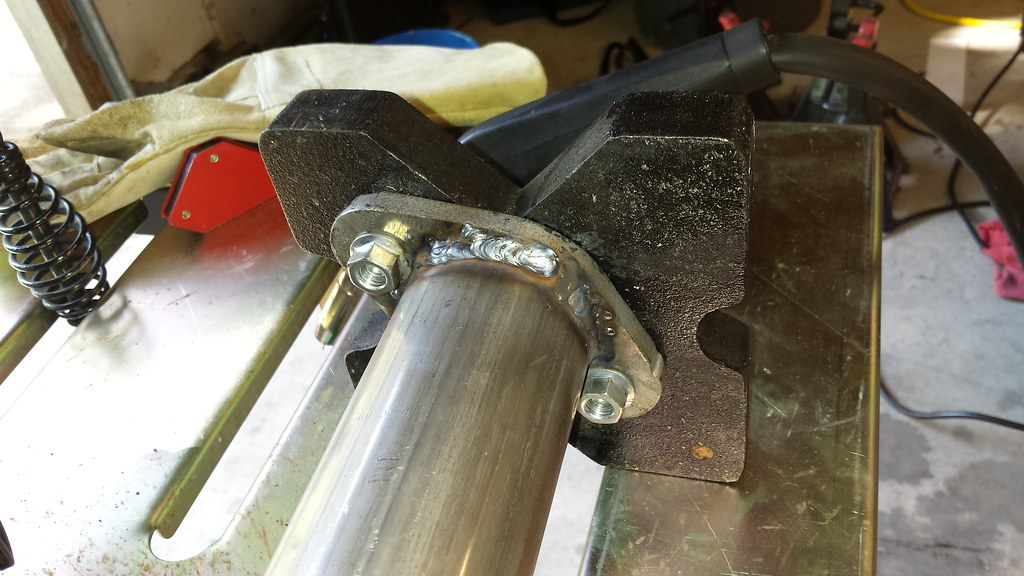 I was a bit torn on welding near where the flange nuts / bolts go, because that always makes assembly a pain in the butt. However, there was a pretty big gap around that hardware, and I didn’t want to put up with that much of an exhaust leak. As a compromise (with myself??) I went with welding them, and then cleaning up any excess so that the hardware would clear. 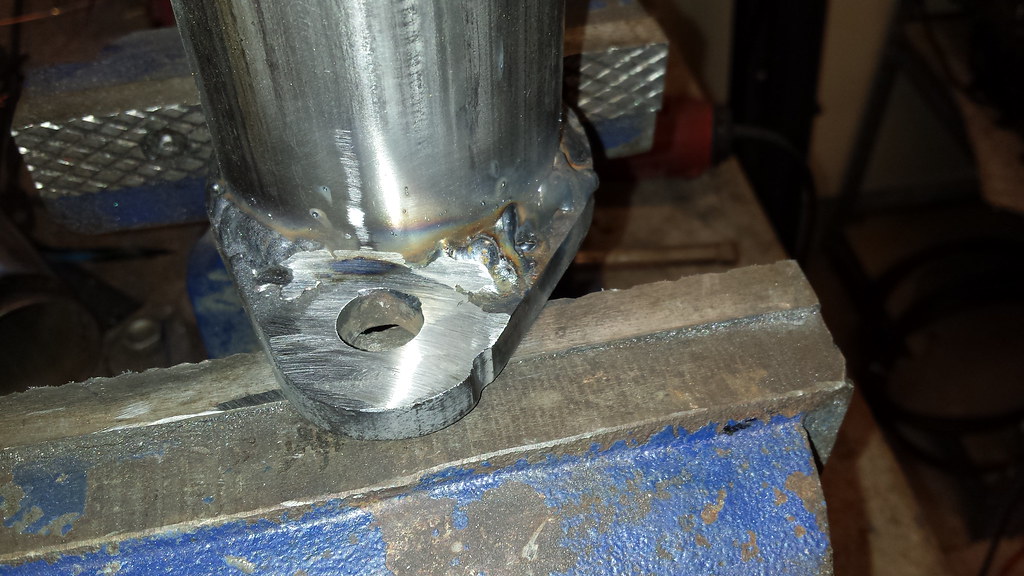 The finished product…looks a bit miserable, if we’re honest. But for a first attempt, I’m pretty happy with it. I learned a ton doing it, and it’ll do the job. No self respecting welder has ever said “look how pretty my grinds are!” Fortunately, I’m not a welder, self respecting or otherwise. 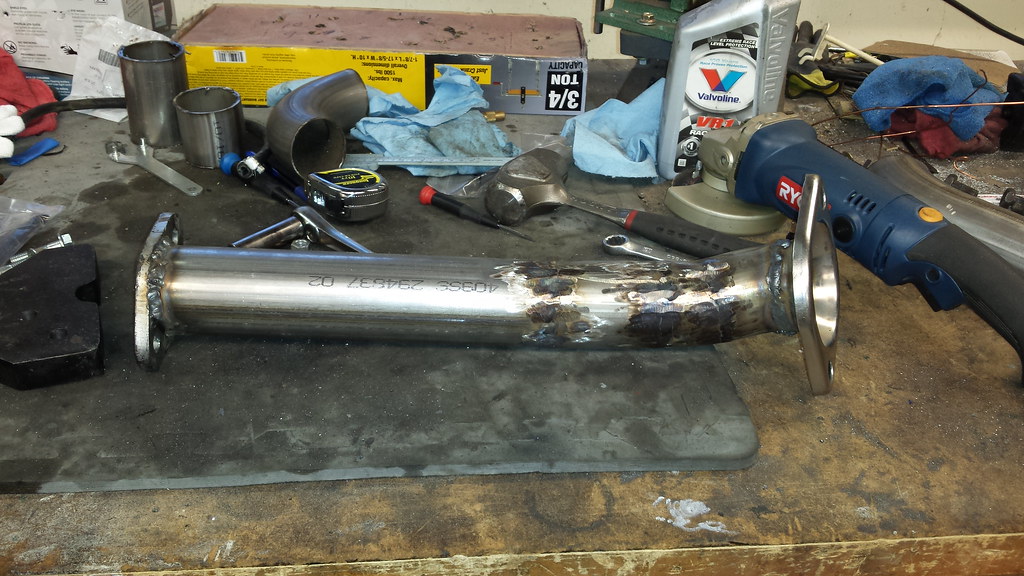 Following my usual Beat It To Fit, Paint It To Match philosophy, a quick coat of engine paint made it moderately more easy on the eyes. 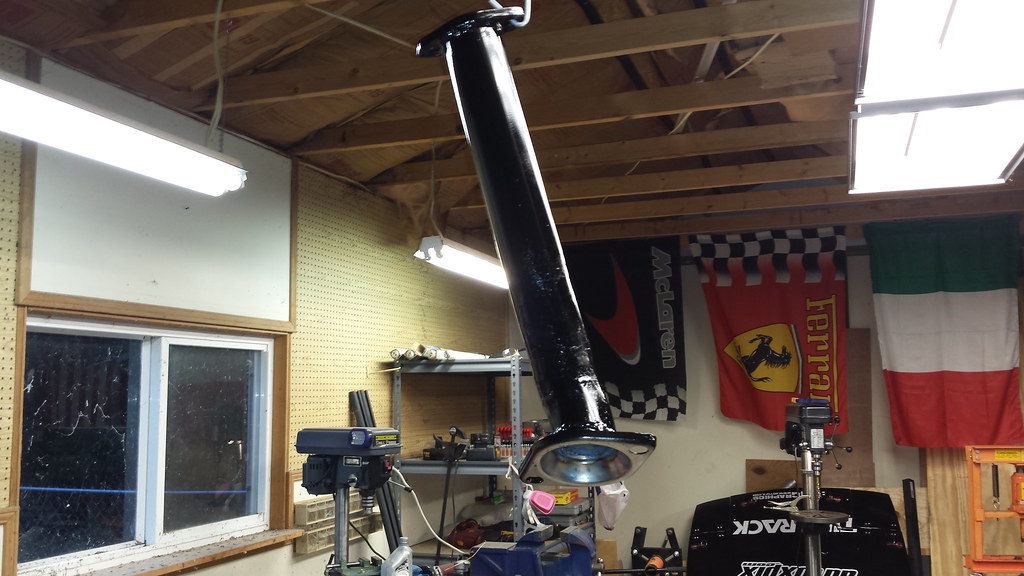