The new engine required a slightly re-configured ECU, and the addition of a VVTuner, DIYAutoTune’s variable valve timing controller. Because of the added hardware, the electronics-box solution I put together last year no longer was workable. So some thinking was required.

And here’s what I came up with: get the battery out of the box! Genius, right? Sort of. Fortunately, I run an AGM battery, so I don’t actually have to have it inside a vented box. But the battery tie-downs were also what secured the battery-box to the floor. The battery was all the way next to the transmission tunnel, which left just enough room to fit the battery box (sans battery) between the battery and the passenger side door bars of the cage. I decided to use the Megasquirt as the “tie down” for the box, and bolted it (on a set of rubber isolators / risers) through the floor, sandwiching the floor of the battery box in place. Next was the VVTuner. I wasn’t SUPER happy with the amount of surface area on the wall of the box the bolts holding the ECU had to work with, so I broke out some counter-sunk washers to give the fasteners on that side a much larger footprint.

Here’s the current setup (forgive the mess, between the battery tender and the ECU and VVTuner tuning cables, it was a bit of a rats nest on the floor): 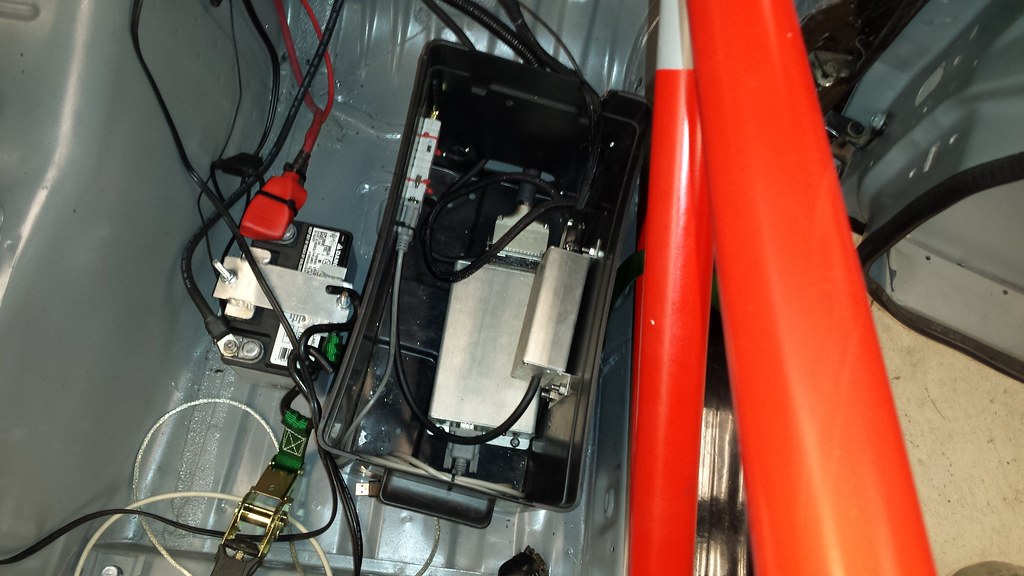 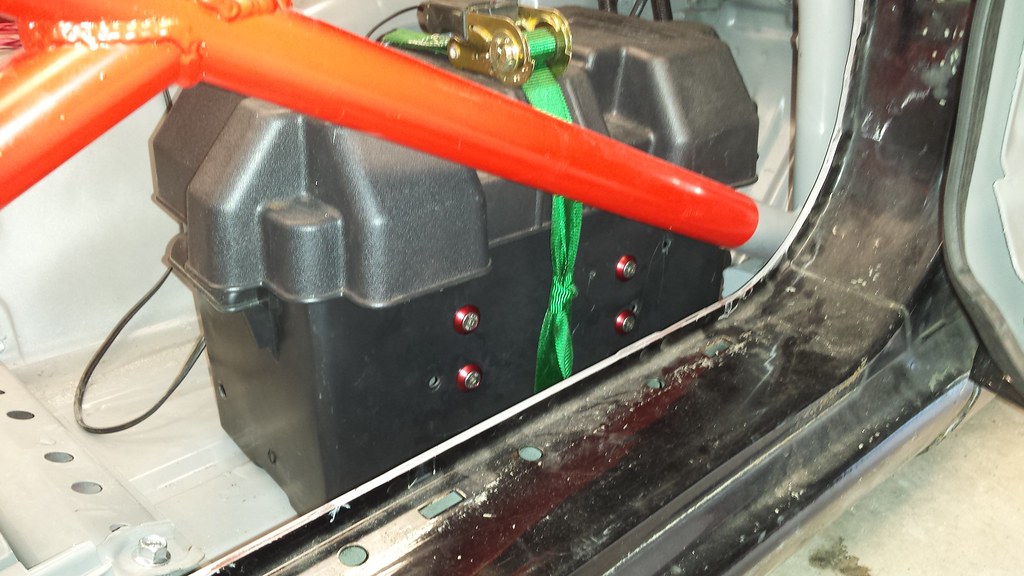 Just a quick shake down to make sure nothing falls off and everything (clutch / brakes / trans / etc) works as it should before doing an alignment, buttoning up a few loose ends, and running it in this weekend’s autocross.

And…I think that’s it? I’m sure there’s something else, but those are the biggies.

Oh…I should probably wash it…

Man did it take some work to get to this point. Over the course of the last week, we’ve (myself and very helpful friends) had:

But once we finally set the last thing right, she fired right up.

I still need to put some semblance of an alignment on it, finish mounting the ECU and VVTuner, and sort out a couple other odds and ends but I may actually get to run it this weekend. I don’t know what’s real anymore!

Despite needing to add weight to the car, there’s still a few places to take it out of less-than-ideal places, and add it back in better places.

One of the big things that’s always bothered me is the seat mount. Back in the ol’ STS days, at the front and rear of the stock seat rails we’d bolted lengths of 2″ steel angle iron to make a cradle for the seat, and ran some long bolts through the seat and the angle iron. It was ugly, heavy, and was starting to get some wiggle. Sub-optimal. So, I tore it apart and had a look.

I made some some CAD (Cardboard Aided Drafting) templates: 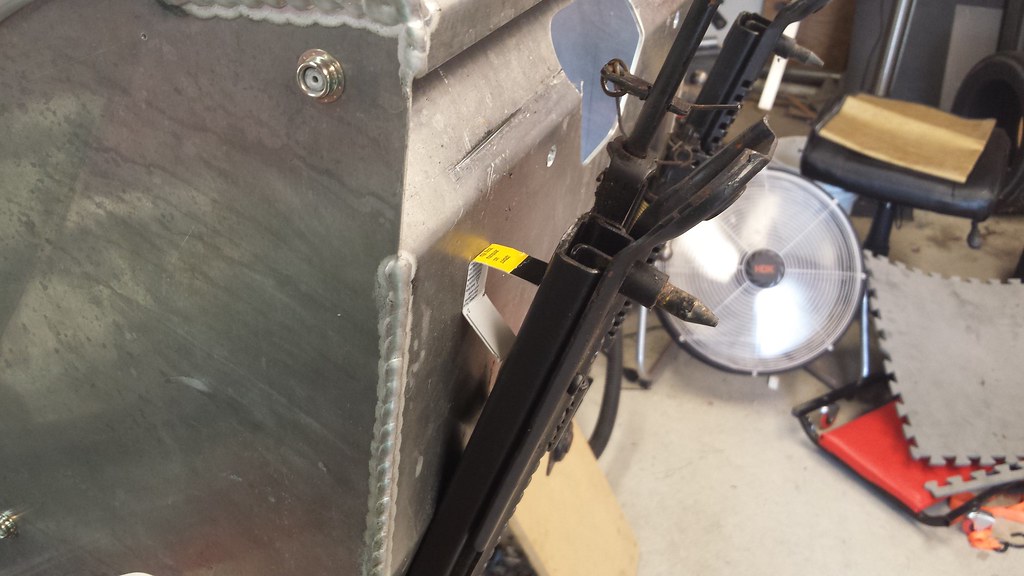 I cut some 1″ x 1/8″ bar-stock, and broke out my engineering mallet (3 lb mini-sledge). A bench vice and a hammer, and an angle grinder for some fine-tuning / massaging, and I whipped up a couple of these for the front. Once the fronts were completed and bolted down, I’d get to the rear. 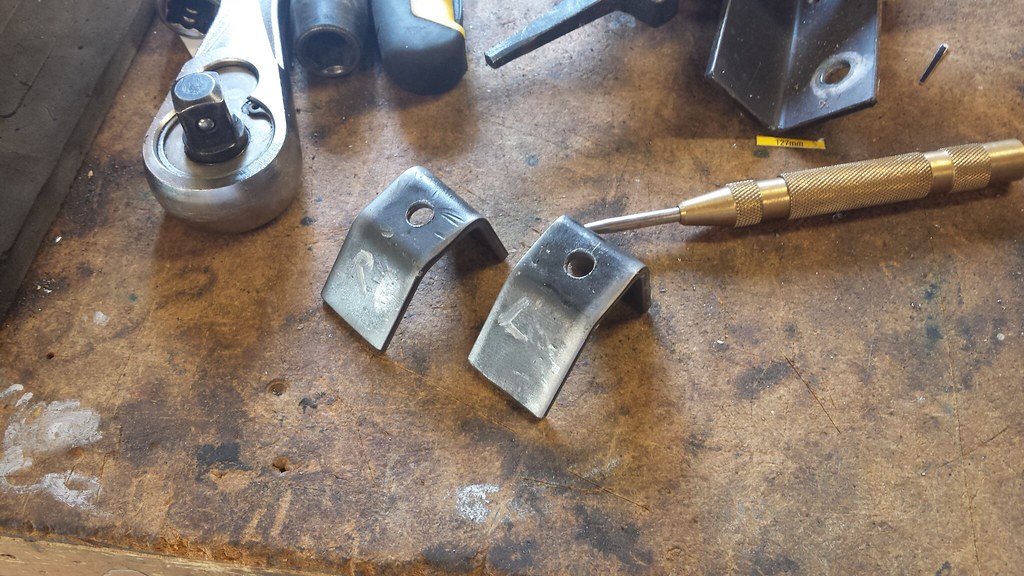 A little drill-press action and some weld-nuts. The air-gap is a standoff built into the nuts so there’s some space to weld, and prevent welding into the threaded area. 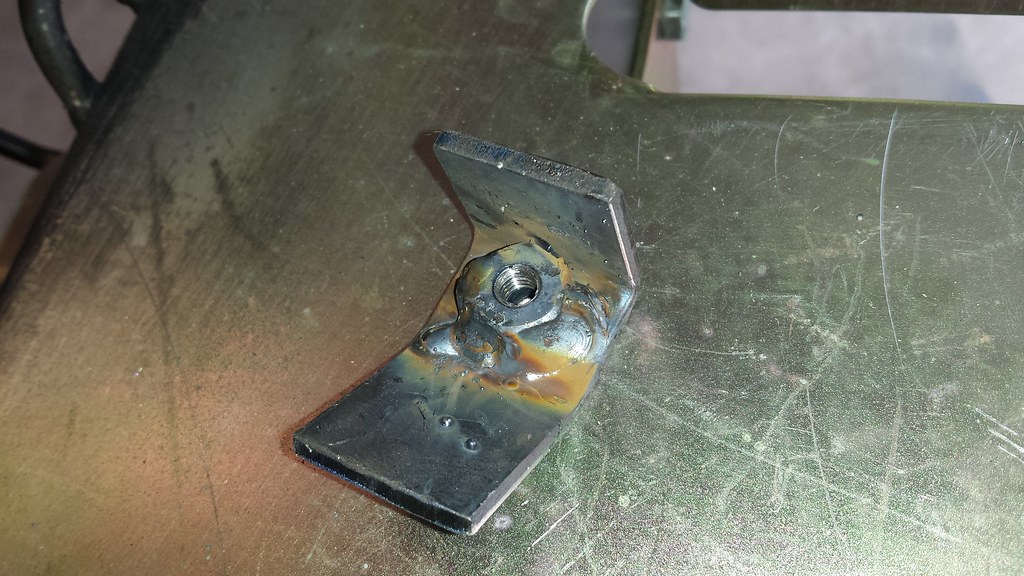 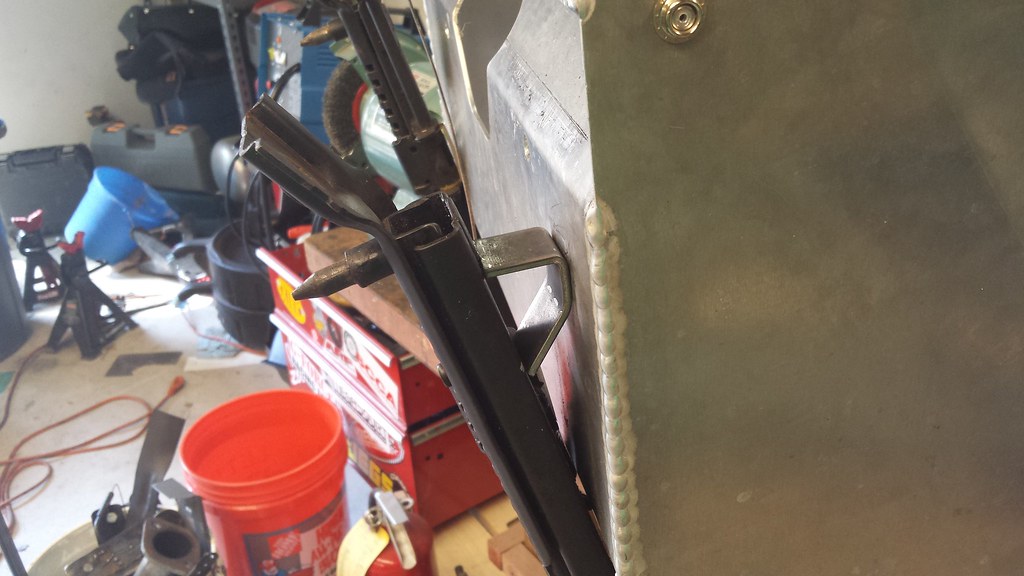 Next it was time to put the rails back in the car (there was a lot of in-and-out there) to measure up where the mounts needed to go, tack them in, and mark the seat for drilling. To do that, I whipped up a pair of transfer punches from bolts on the bench grinder. Put the seat in place and whack with a rubber mallet, then drill. 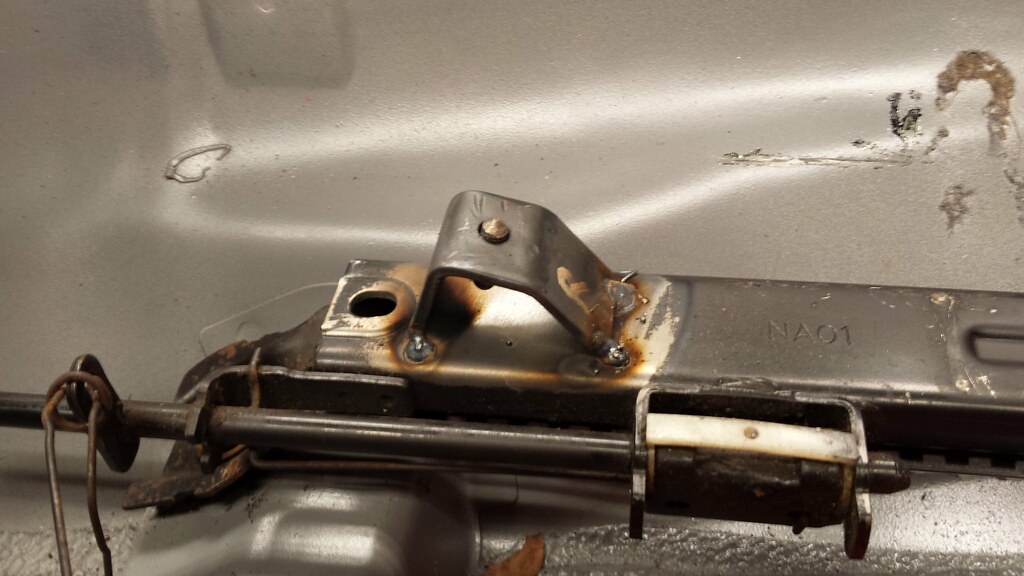 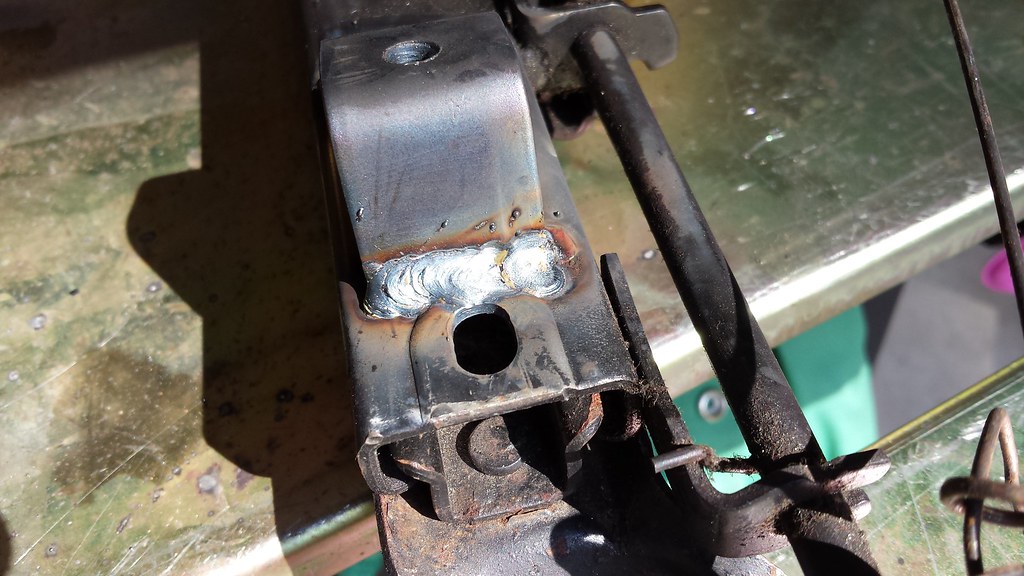 More cutting, grinding, hammering, and welding to get the rear pair made up. 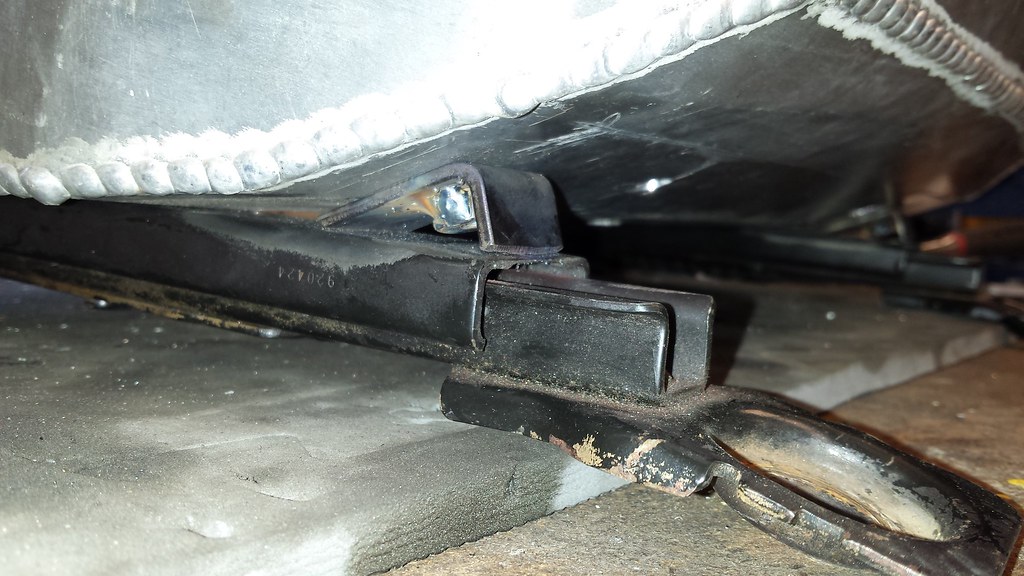 Repeat fitting the rails back in the car, bolt the fronts down, and transfer-punch those holes to the rear of the seat. More welding, a little paint, and holy crap, it actually looks decent. Like I bought ’em! 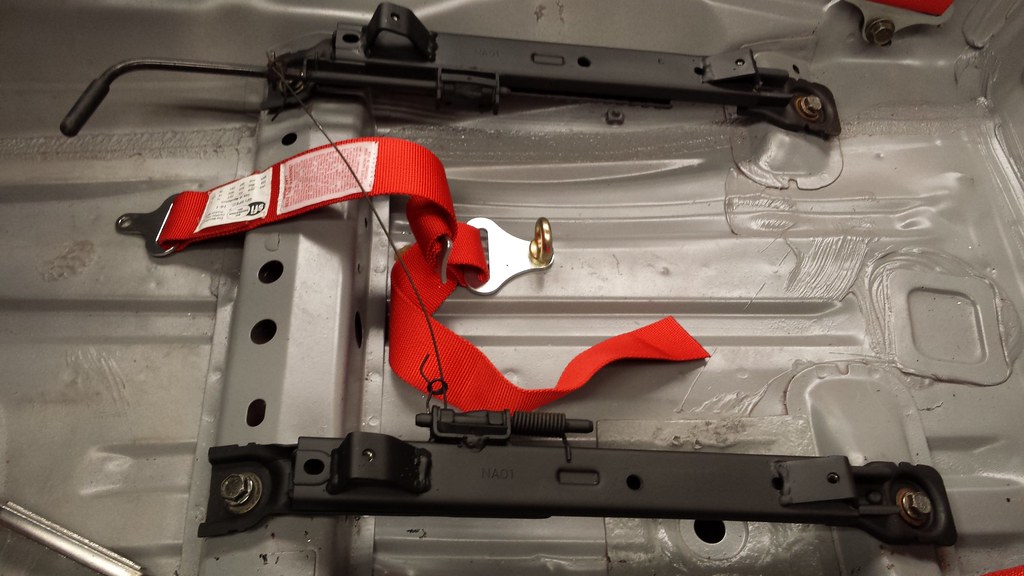 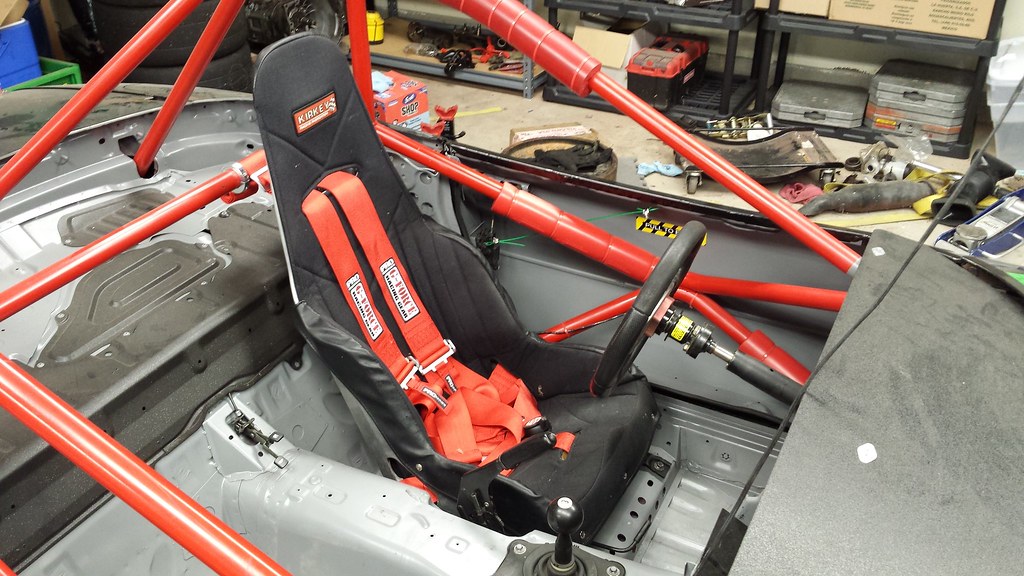 I know it’s just a few brackets, but I’m pleased with how it turned out.The more I play with the welder, the happier I am with the results, and with being able to zip useful things together.

Sitrep: the car’s still not running yet, but at least it’s heavier now! Adding weight to a race car feels fundamentally wrong, but what can you do. As a famous philosopher once said: “Rules is rules and if we didn’t have rules then where would we be?”

As discussed in the previous post, the Miata was too light for the class given the bigger motor. After a cup of tea, and coopting a few ideas from a Spec Miata ballast system, I came up with a way to add 100 lbs to the car in a place that would improve the balance of the car (offsetting the driver’s weight), and keeping it low down and close to the center of the car.

The idea was simple: procure a stock passenger side seat base, then fab up some steel and lead to fit between those rails. Use a 1/4″ pieces of steel on top of the rails, hang ~1 1/4″ of lead under that, and sandwich all of that together with another 1/4″ piece of steel from underneath. 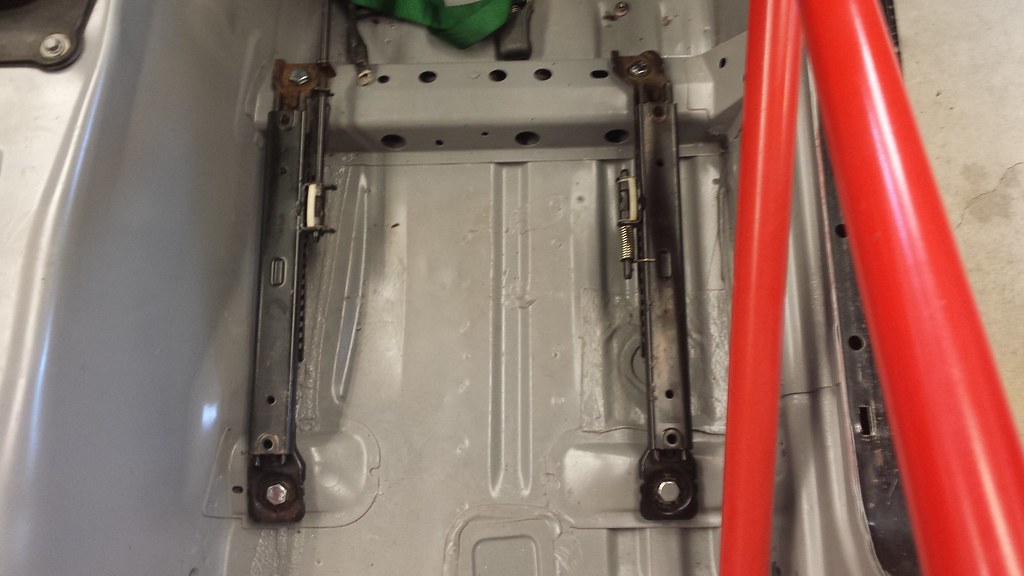 The previous picture shows the rails completely intact (minus the cable between the adjusting lever and its partner on the opposite side. The problem is, the ballast wouldn’t fit with the adjusting lever and locking mechanisms in place, so all of that had to go. Since the mechanism that holds the rails steady was lopped off, I got the rails lined up where I thought they’d work for me, and tacked them in place. 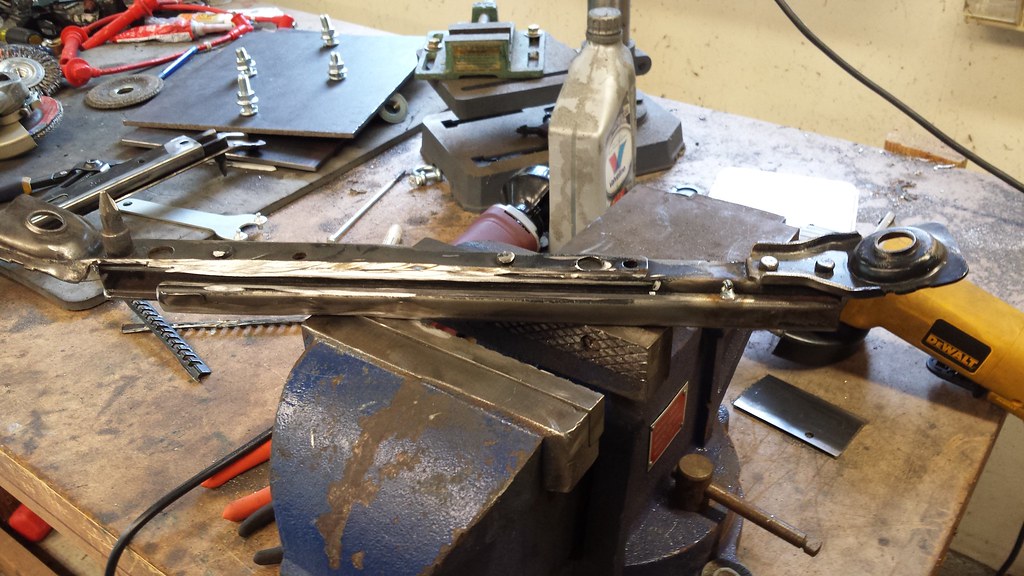 After mocking things up, a buddy with, let’s say, access, to some serious machine shop equipment helped me source and cut out the steel and lead (band saws bigger than my dining room table are cool). A few holes (that I even drilled almost straight! #miatathings) later, and some stainless hardware, and we can get an idea of exactly what we’re working with. 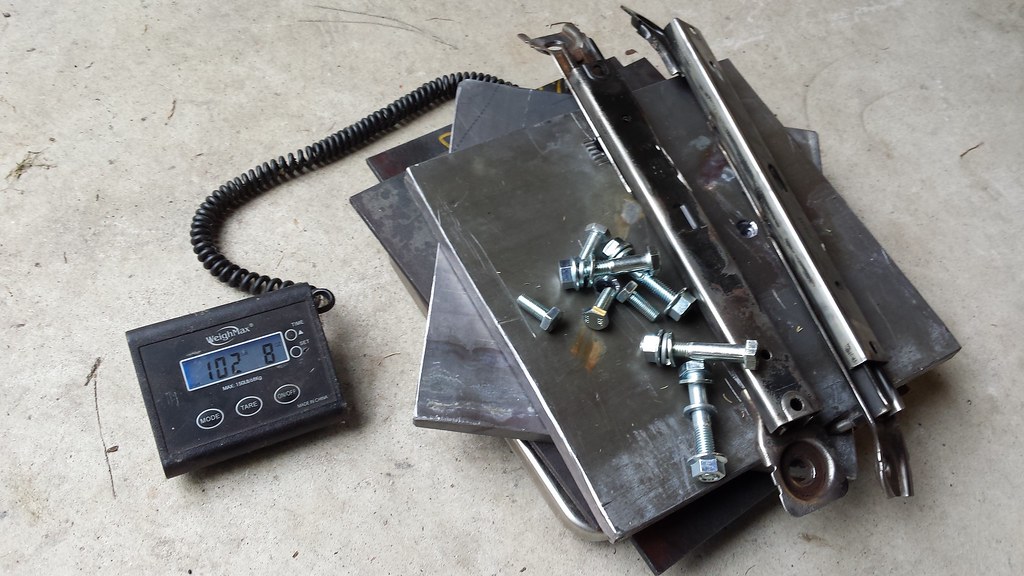 I needed 94 lbs, I wanted at least 100 lbs… came out damn near perfect. Online material density calculators are your friend here. I mean, you COULD do some old fashioned math, but where’s the fun in that? Essentially: 12″ x 12″ x 1 1/4″ of lead add up to around 75 lbs, 12 x 12 x 1/4″ (bottom plate) and 15 x 10 x 1/4″ (base plate to go on the rails), come out to be about 20 lbs. Cut a few holes, then add the rails and hardware, and we get 102 lbs and some change. After tacking everything up, doing an initial mock up, fully welding the base plate to the rails, it was time for a final mock-up before completing the welds on the rail sliders, just in case I found myself needing to adjust things. 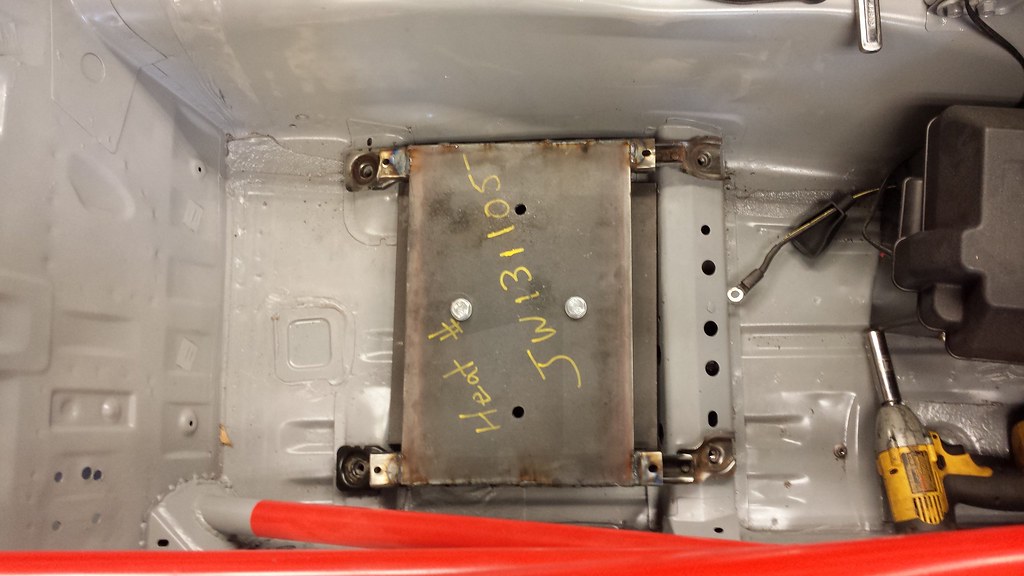 You can see the bottom sandwich plate hung underneath the base by a pair of bolts to make sure the clearance is as expected. And sure enough, there’s enough. Not exactly a ton, but enough. The downside for “not a ton” is that the whole 100 lb lump needed to be assembled out of the car, and then muscled into place.

After finishing up the welding on the sliders (to make sure they don’t slide no more), it was time to slap a couple coats of paint on everything, because lead poisoning is no fun for anyone. Eventually you’ll end up walking into rooms and then forgetting….what were we talking about again?

My welds look great….after a coat of paint 😉 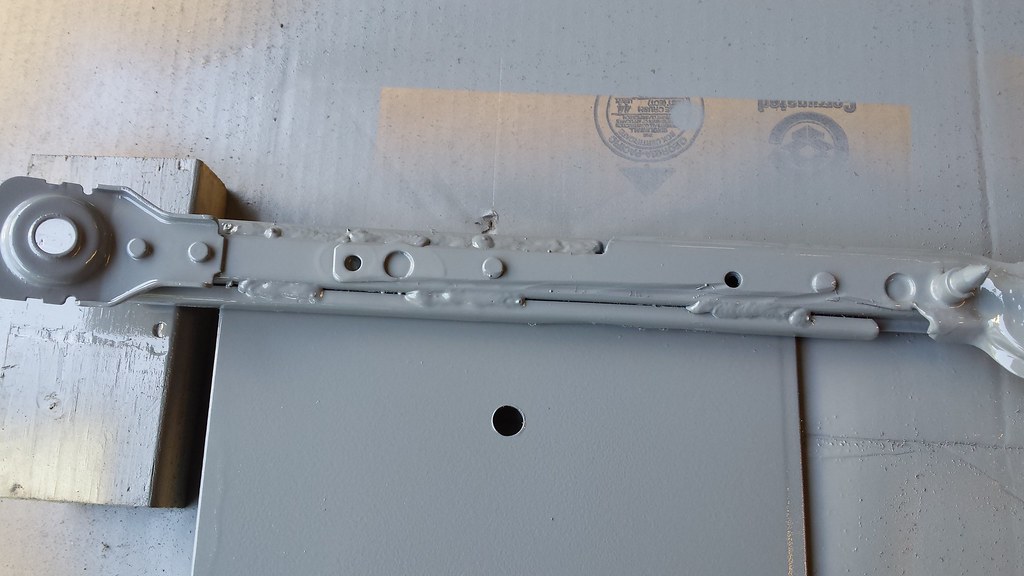 The whole thing assembled on the bench, It’s up on the wood so that I’d be able to get a wrench underneath to snug up the nuts. 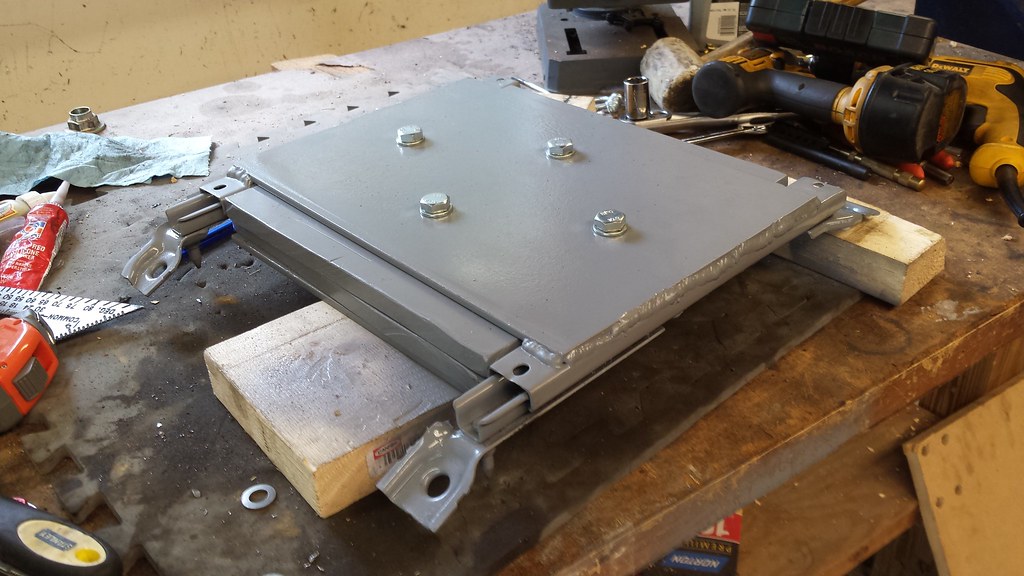 And finally, resting in its home. 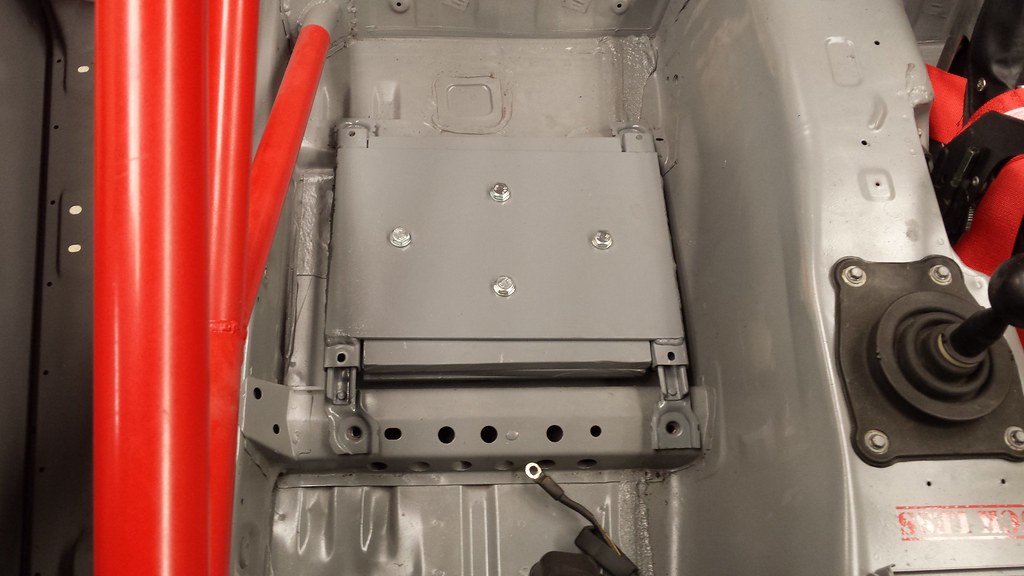 What a ridiculous amount of time and effort put in to making a race car slower. Dumb.
Aww who am I kidding… the only way my car could be any slower right now is if it were sitting on cinder blocks.