Now that the season’s over, the time has come to re-attach the inner and outer rear fender sheet metal. This, like most things, is easier said than done, because the sheet metal is about as thin as tin foil. What that means is that even on its lowest power setting, even being super careful, the welder (ie: Me) will often just burn through the steel instead of actually welding anything. All that to say that it’s really finicky.

Here’s the starting point on the “better” side, with weld-thru primer that I sprayed on when I originally cut them to prevent rust from building between then and now, with a cleco clamp to hold them together. The fitup is not super great because it was done with angle grinders and cutoff wheels, which that didn’t help matters. 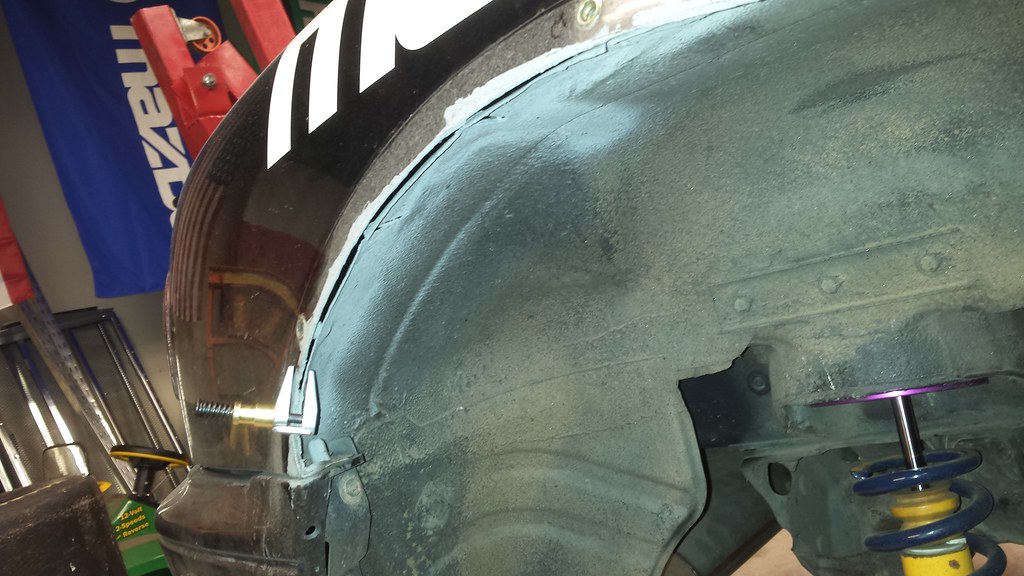 This is about half way done or so. There’s no “running a bead” on metal this thin. More like a series of tack welds that eventually fill in all the space. 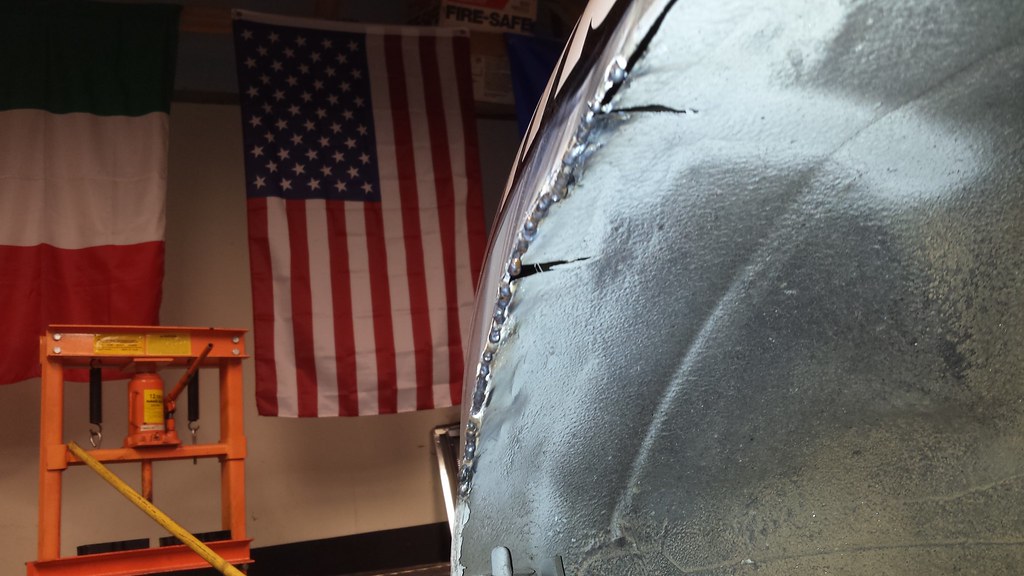 And here is the first side fully welded out. It’s pretty ugly, but effective. The fenders are SO much stronger now that they’re bonded back together. 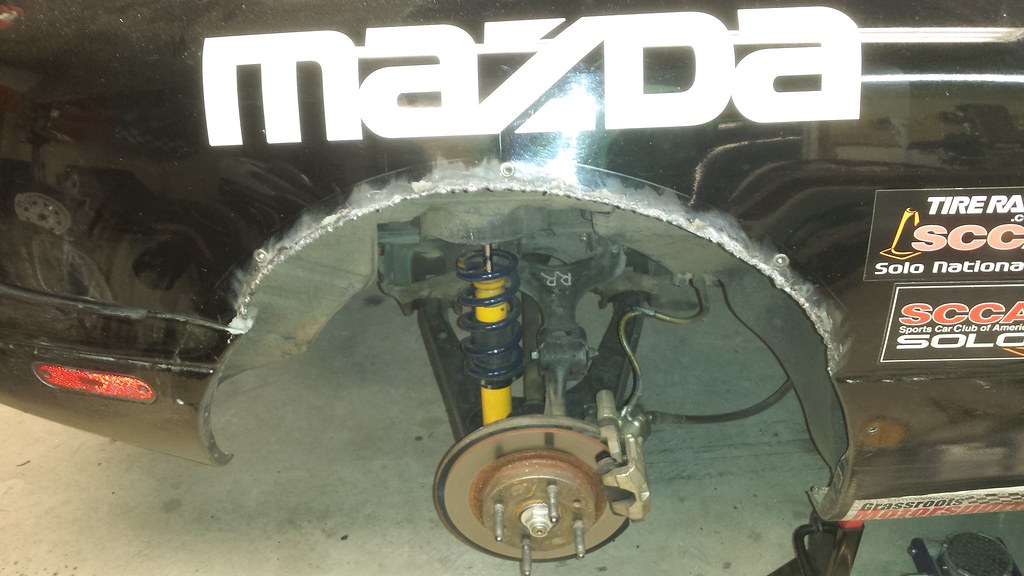 And here it is finished up with a flap disk, which puts a pretty nice finish on things. The final grinding revealed a few pin-holes that needed to be filled, but that was expected with stacking tack-welds like this. 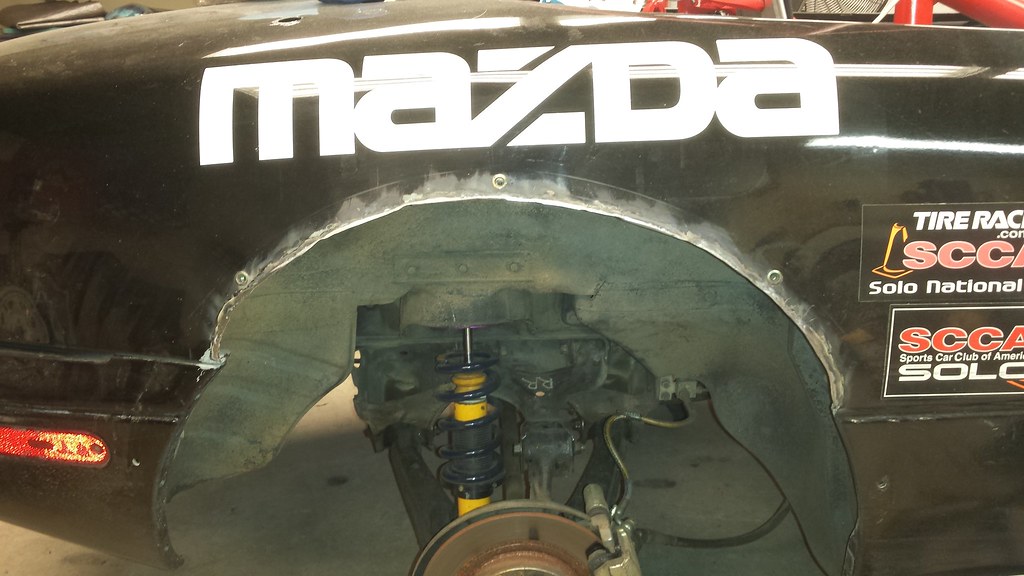 Next it was off to the driver’s side, which was very much the Bad Side, as that was the first one I did, and as such the one I learned my lessons on. It’s…pretty buggered. 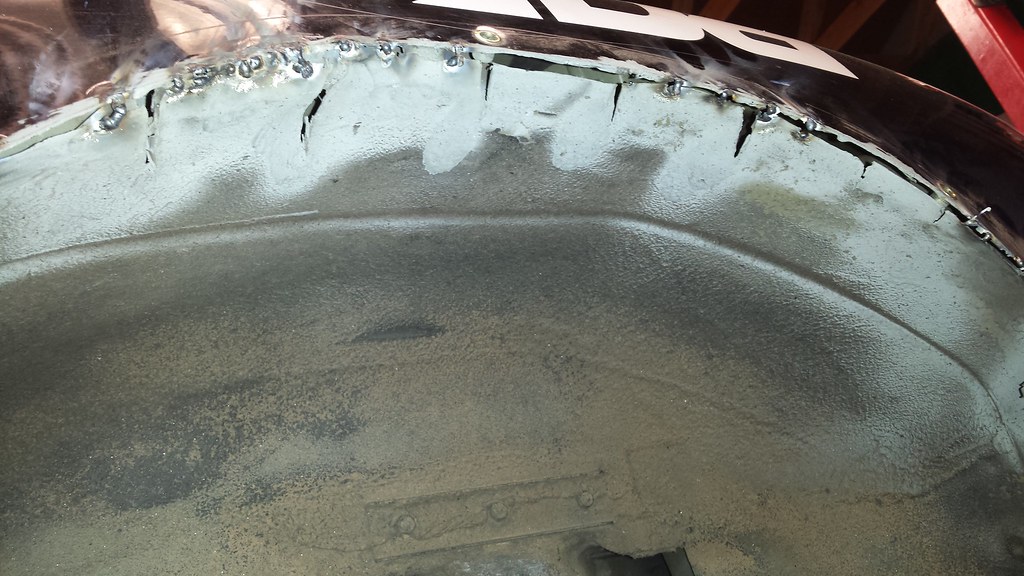 I tried to start welding it, but physics dictates that no matter how hard you try, one cannot weld steel to air. And the sheet metal is just too thin to take the heat of stacking a bunch of tacks together to bridge the gap. I’m sure a much better welder than I could have done the job in that way, but I couldn’t. After mulling it over and talking to some far more experienced buddies, one recommended getting some 1/8″ bar (available from just about any hardware store), and using it as a filler in the gap. The added advantage of doing that is that the thicker metal will pull heat out of the weld faster so it won’t burn through the thin sheet metal as easily, making the work far more forgiving. After cleaning up some of the hackery where I attempted to weld across that gap, here’s that process. The 1st thing is that those bars from Home Depot Racing Supply come covered in gunk to prevent rusting, and that MUST be cleaned up to be able to weld to it effectively. After that, a little bending, cutting, and smoothing, and it made a practically perfect spacer. Gotta love a cheap fix. 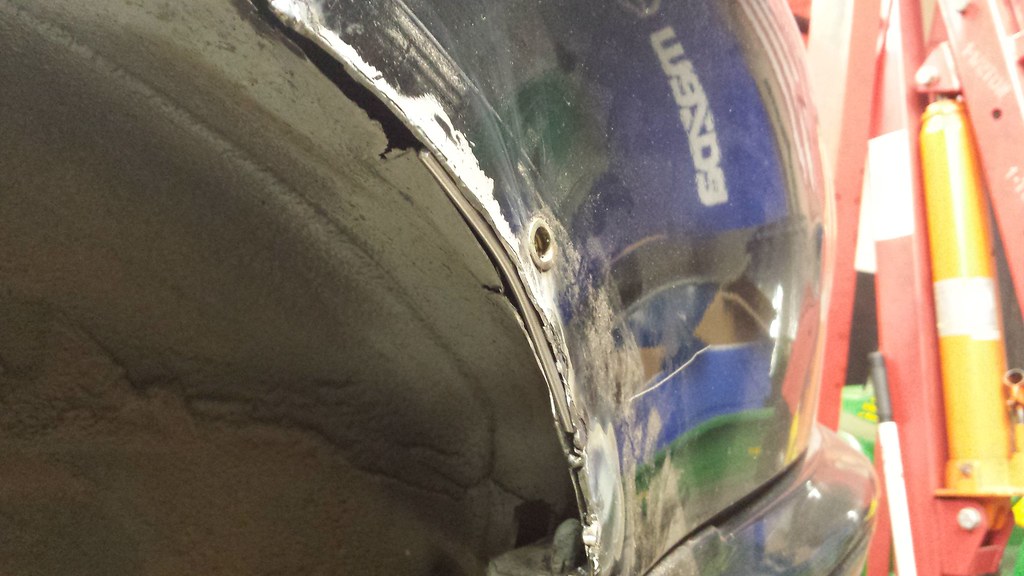 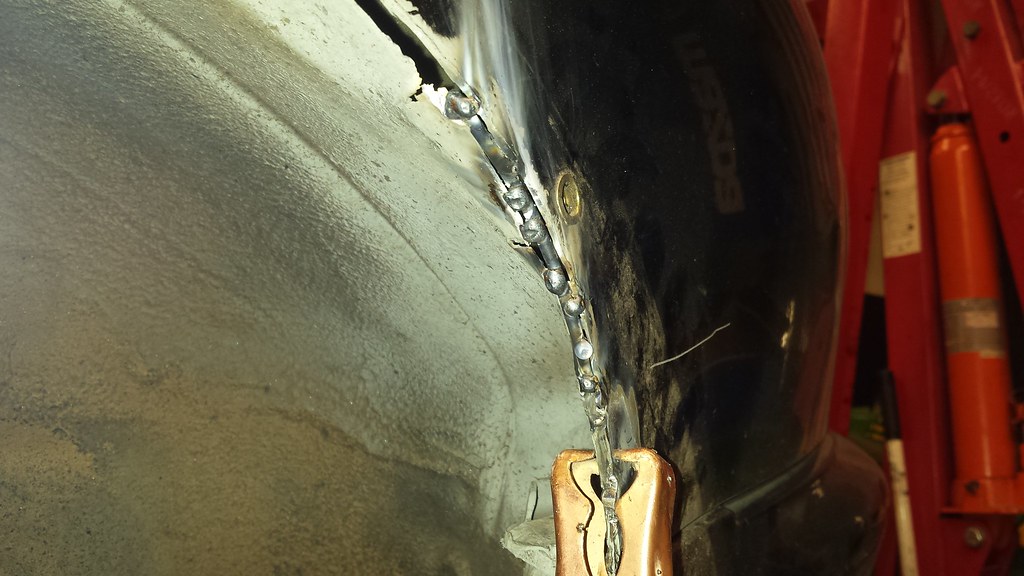 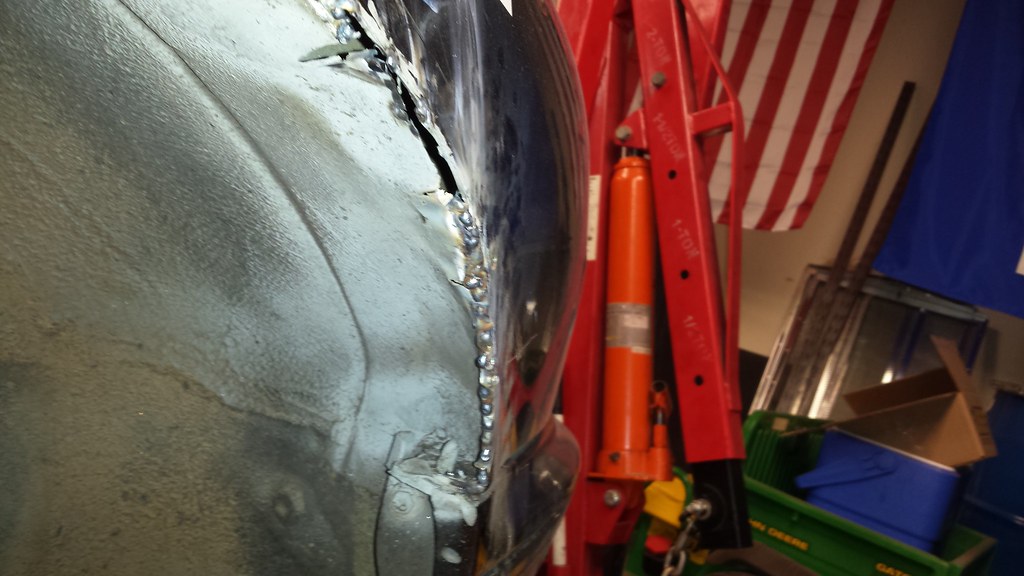 A little time with a flap disk (how did I ever live without flap disks?!) and it’ll clean right up.

Unfortunately my fun came to an abrupt end. In my business we preach “two is one and one is none.” Well, one is in fact none.

When I started welding, I figured a 2# spool would last me years. After all, how much could a welder be good for anyway? Turns out: a lot. A whole lot. I keep finding problems that “welder” is the answer to, so the unthinkable, yet inevitable happened. And of course, it was long after any hardware store was open. 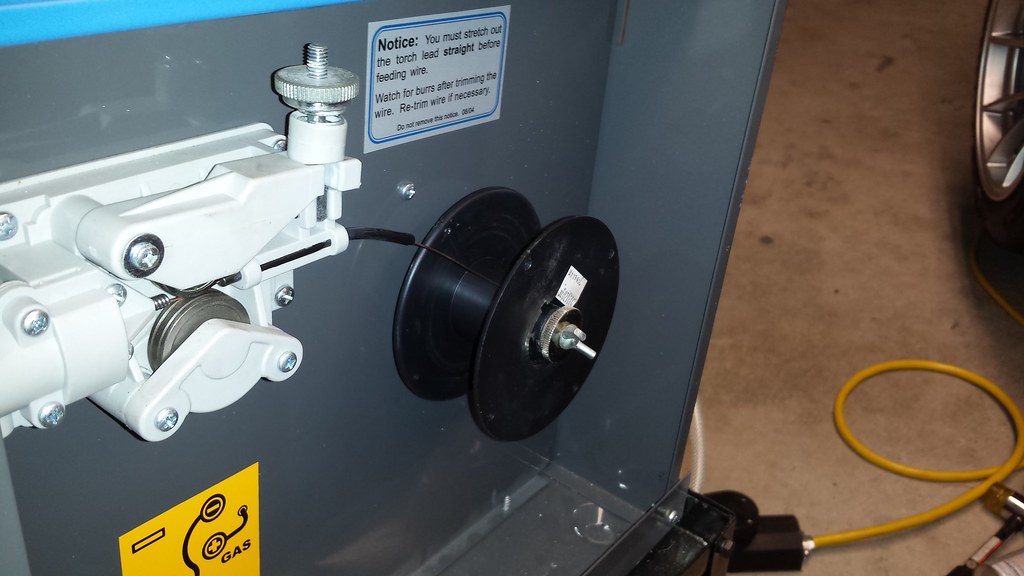 Bollocks. The next morning, 2 Home Depots and a Northern Tool later, and I was back in business (and I picked up a damn spare this time). Here is that fender finally welded out, after the first pass with the flap disk. It came out far better than I’d had any hope of when I started this side. 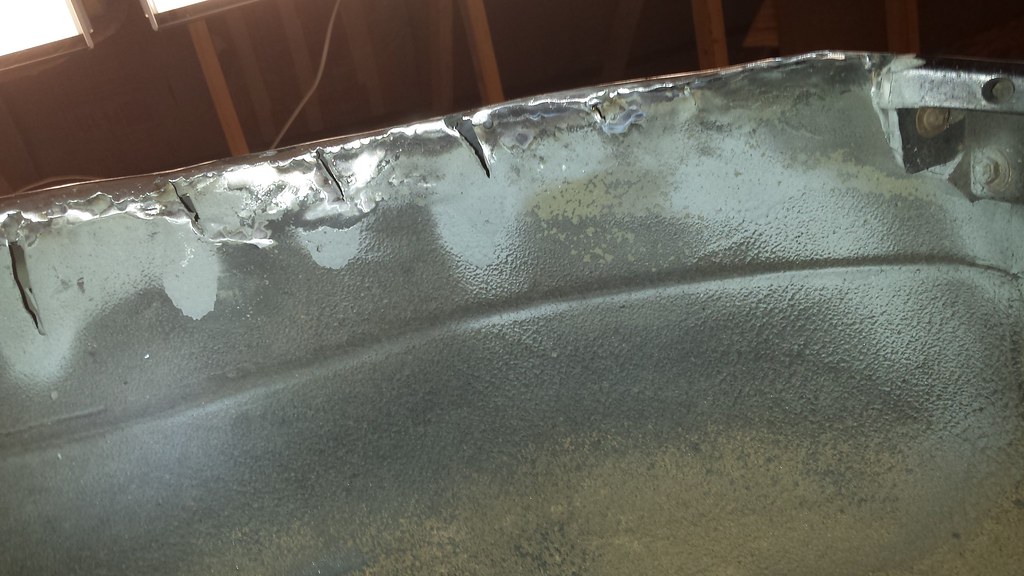 Finished up, ready for paint: 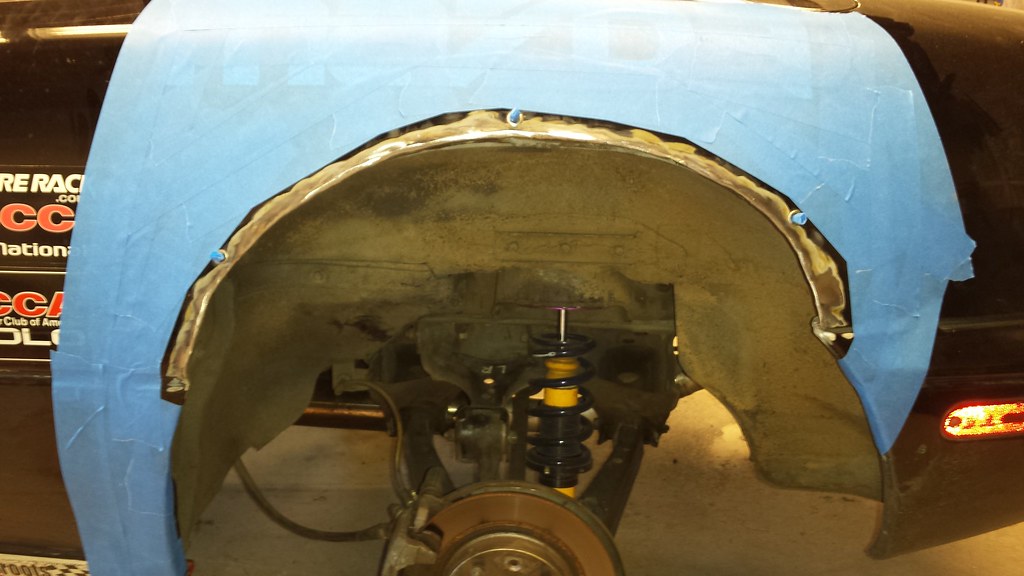 After a couple coats of paint to prevent rust, any further gaps / holes will be filled with seam sealer. 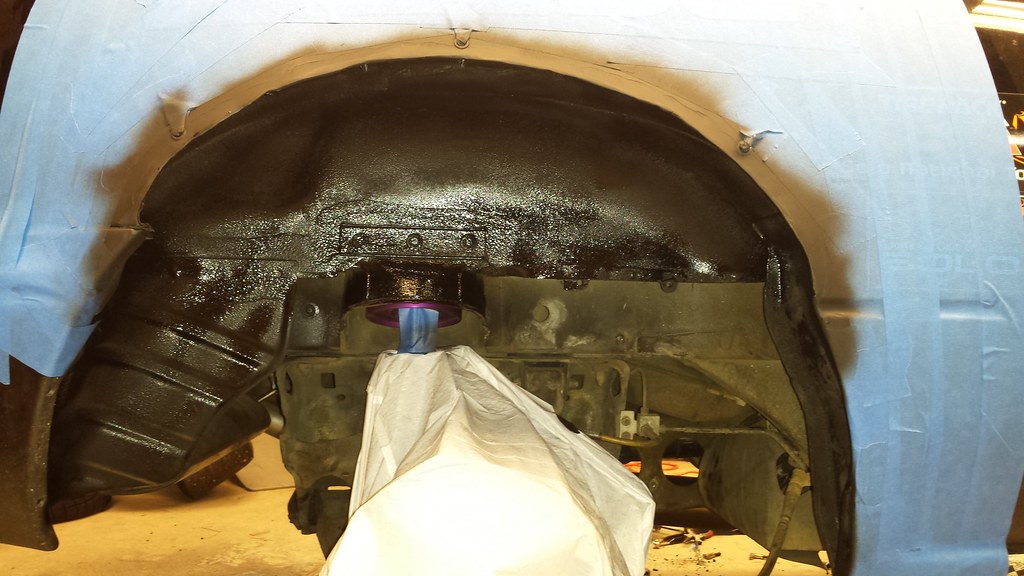 A lot of careful, cramped tape work later, and it was time to break out the 3M seam sealer & the caulking gun. 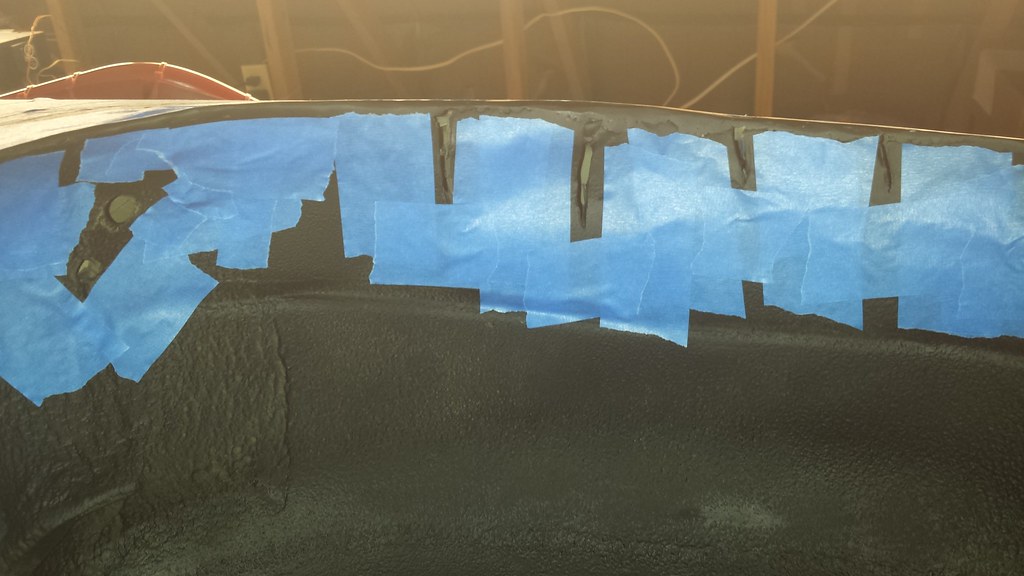 And finally, all cleaned up and reassembled. 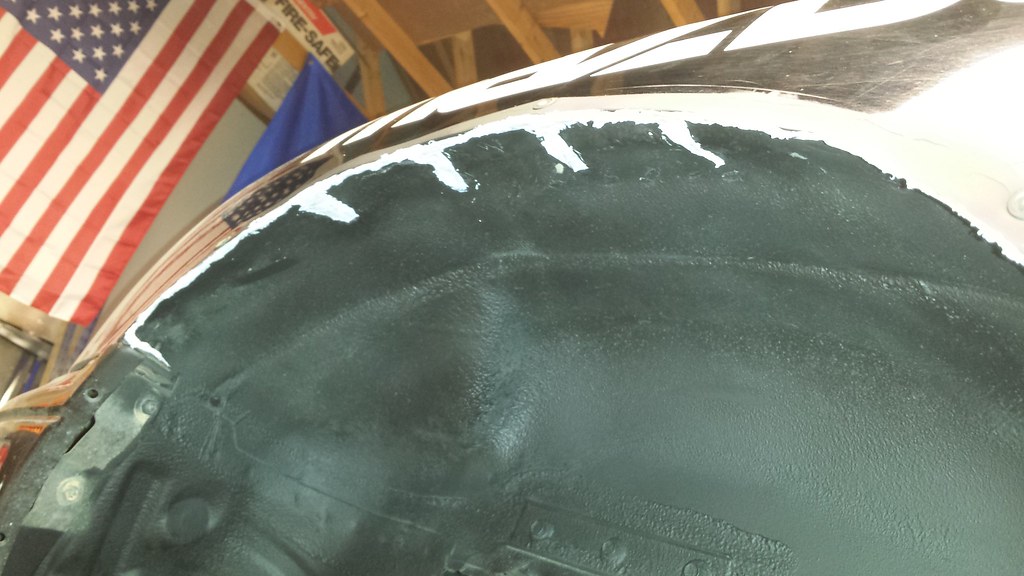 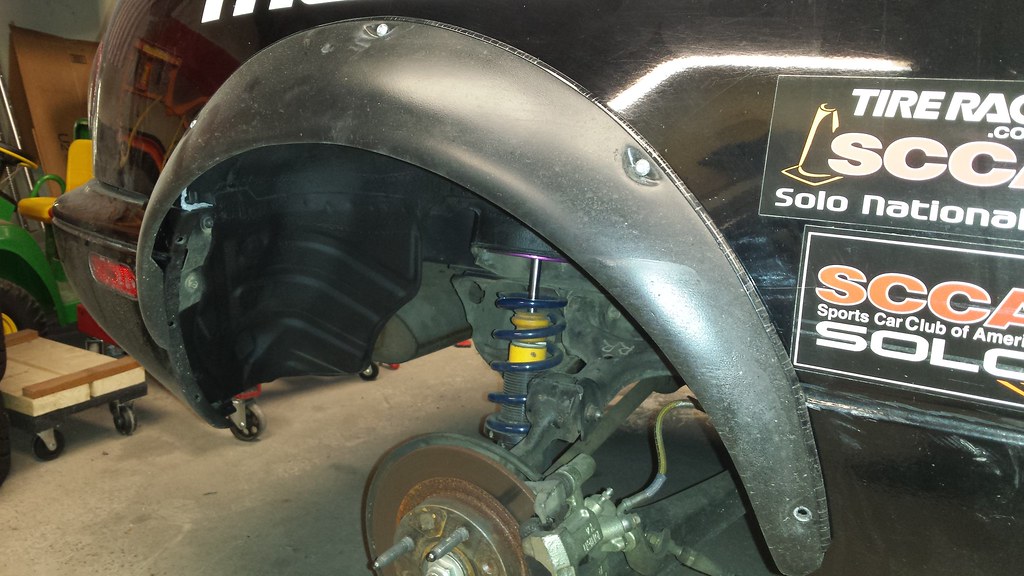 With the flares installed, you can still see the gray seam sealer at the corners (and underneath if you bend over far enough). Maybe if it bothers me later on I’ll hit it with another coat of paint to cover them, but for now, I’m calling that job done.

All the work I’ve done over the last couple months is basically invisible to the outside observer, which is moderately annoying, but it’ll improve longevity by preventing rust and other issues (like easily bent fenders).