I had a little time for a quick project to correct one of the more annoying side effects of gutting most of the bumper supports: part of the bumper supports held up the leading edge of the hood, but with that gone, the already flimsy hood was even flimsier. The steel barn-door covers at the corners of the hood were causing the hood to flex, and causing the center of the hood to bow up, making a bit of a scoop, which is sub optimal.

I found a pair of rubber hood (or maybe trunk?) bumpers in 1 of my buckets o’ bolts and realized they would be about perfect for this. 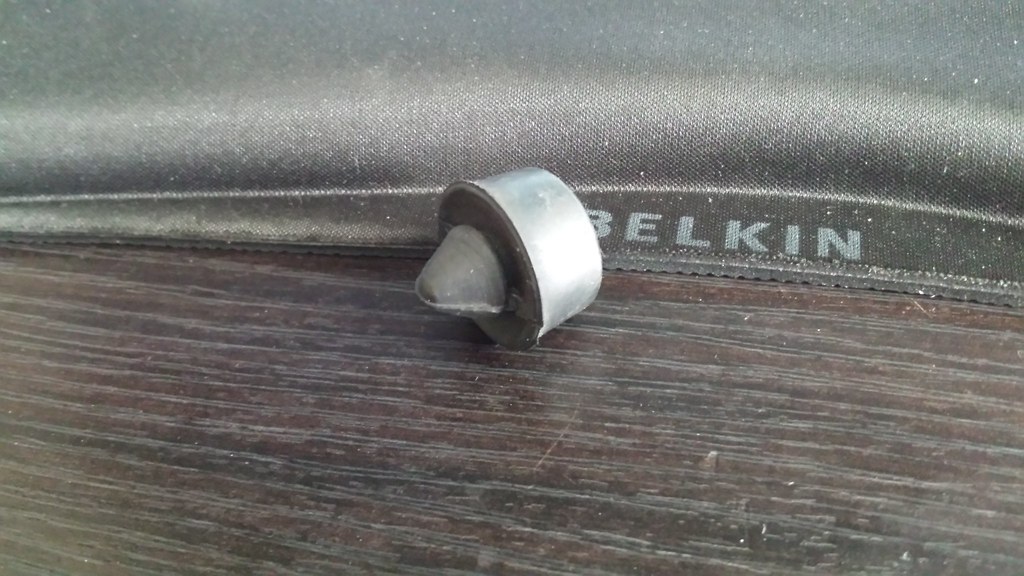 These were going to be above the chassis cutouts for the turn signals, so I pulled the bumper to allow far easier access to the bottom nuts. What else are you going to do with an autocross 2 days away? 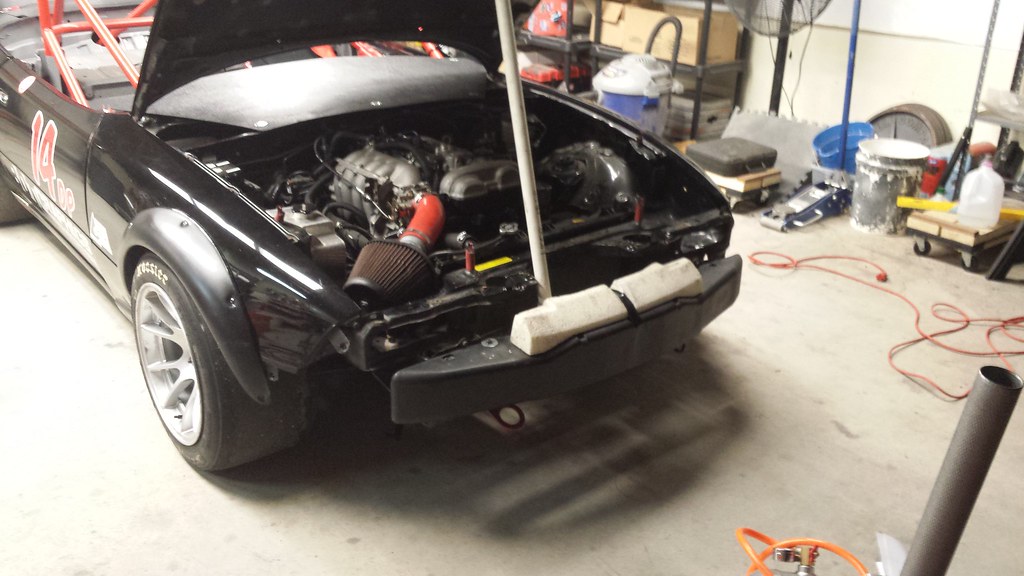 Not too many pictures of the process, but I used a pair of long M6 x 1.0 mm bolts and made up brackets that would accept the rubber bumpers. A little welding and grinding, and here’s what I ended up with. There’s another flange nut at the bottom underneath the body sheet metal, to lock everything together (along with some loctite): 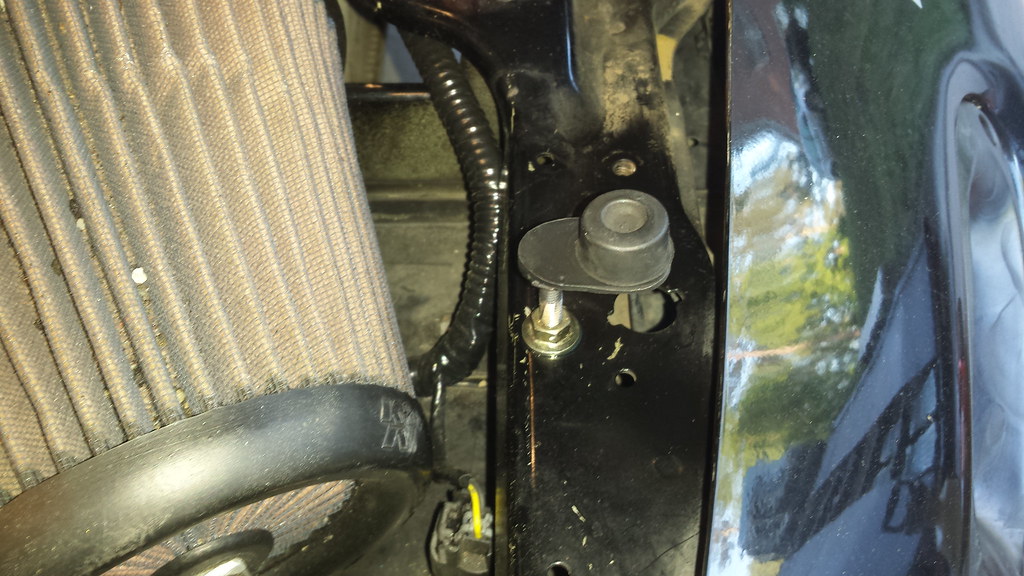 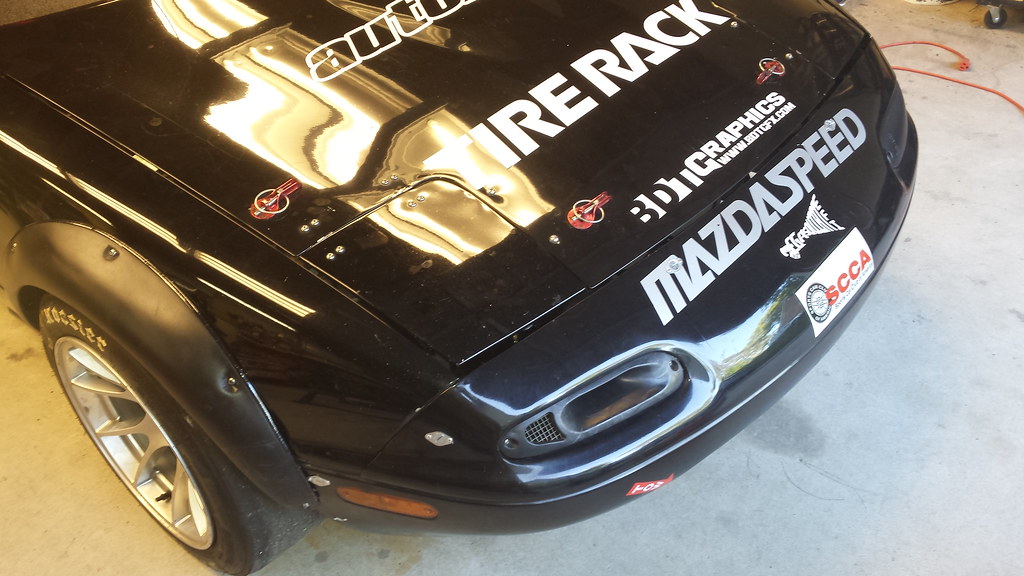 We’ll see how they work tomorrow at the autocross.

I’ve been meaning to do this for a while, and now that The Dragon nears, I really need to get to it because there aren’t any fuel stops on the Hill. Having fuel on hand is going to be a must.

I bought a VP Fuel Jug many moons ago for keeping the race car topped up. Now it needs a home on the trailer.

The first challenge would be getting the trailer into the workshop. The shop is at the bottom of a steep hill, that also has a slight rise as you enter the shop to keep water out. The trailer bottoms out not far from the base of that rise. I ended up using a pair of wheel dollies under the rear frame rail of the trailer so that it would ride them up the rise into the shop. That was definitely an interesting experiment that I still can’t believe worked as well as it did.  At least now working on the trailer will be a good deal easier. 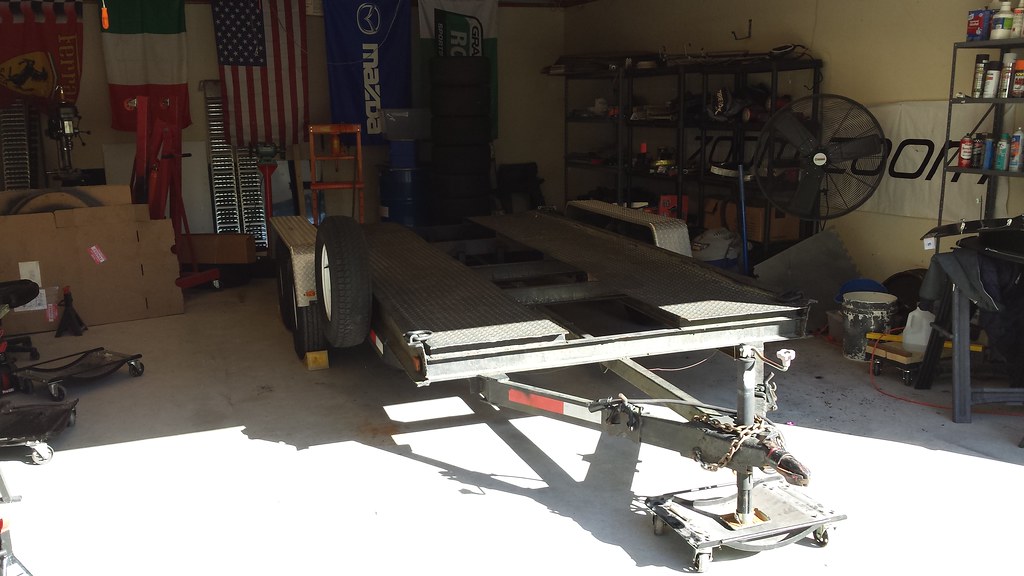 Since I plan, still, to add a winch to the trailer, I wanted to keep whatever I made below the frame & deck level so that with the fuel jug removed, a winch cable could be played out.

I had some 1″ box tubing kicking around the shop, and that seemed like the perfect took for the job. The 2″ wide tongue member makes a good base for the jug to rest on. 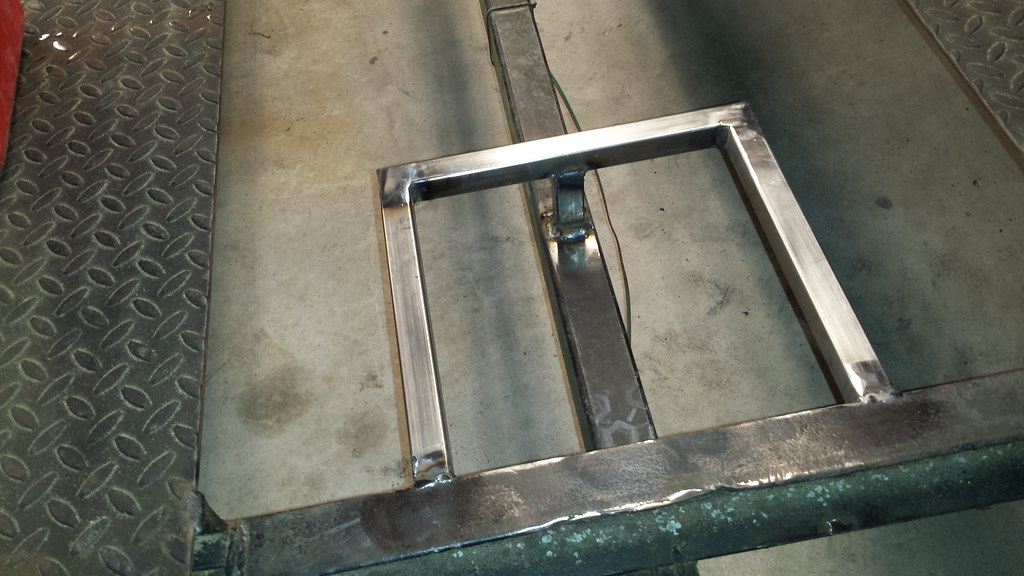 A quick test-fit to help determine where the ratchet strap tie points need to go: 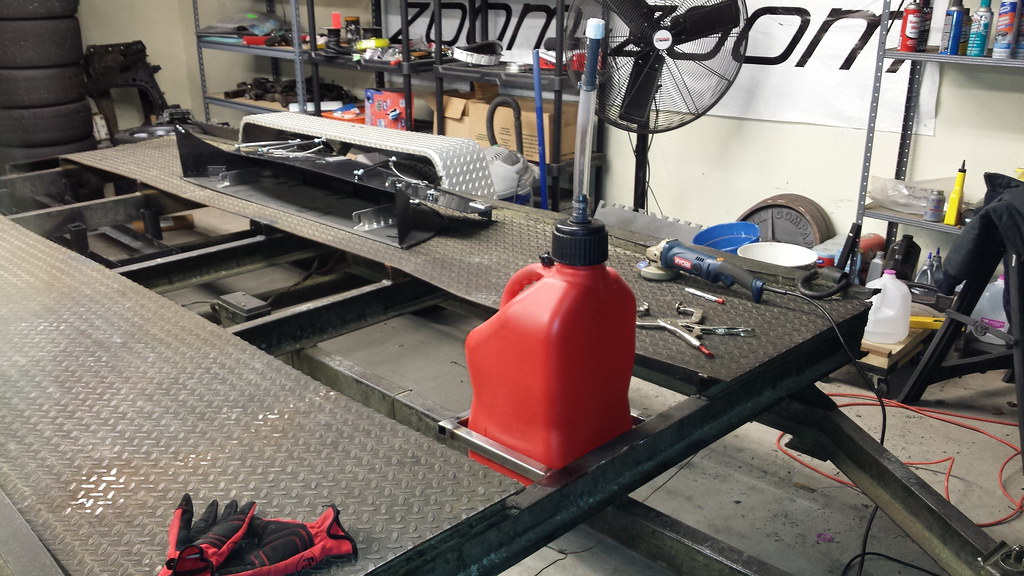 I used a pair of chain links cut a little longer than in half for the tie downs. D-rings on swivels on the side of the tubing would be moderately better. If it bugs me on my first outing with it (this weekend), the chain links will get lopped off and replaced. 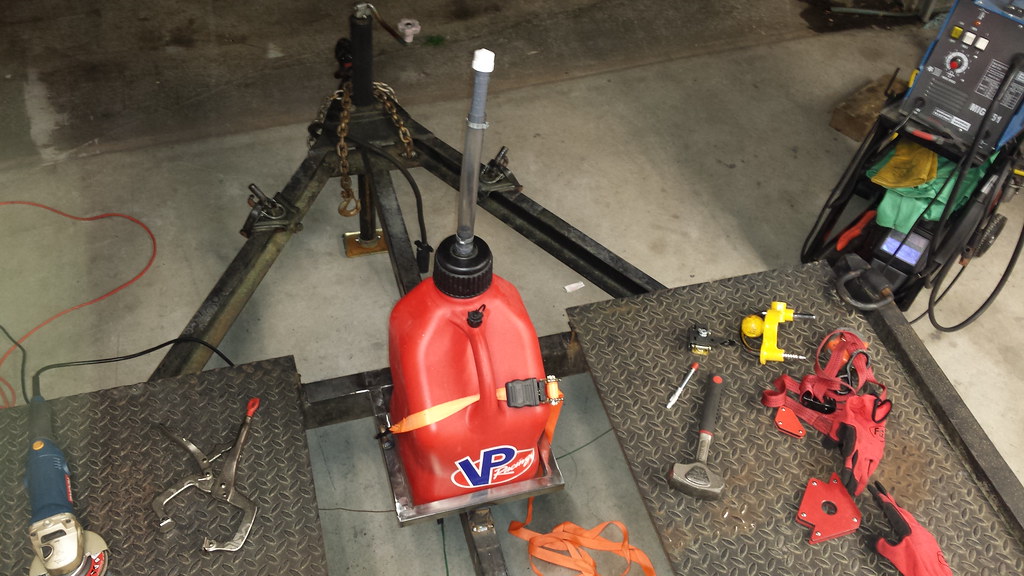 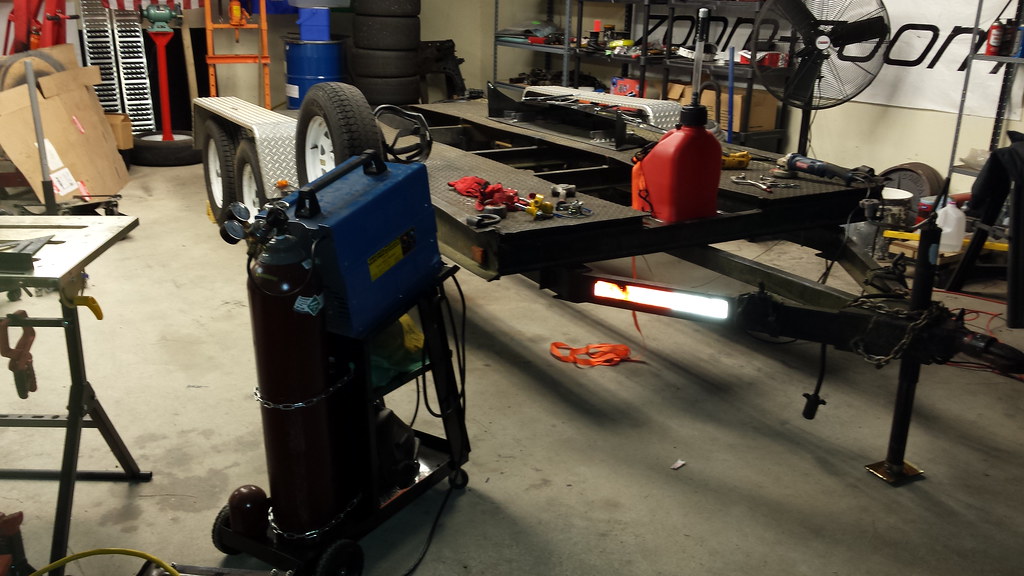 EDIT: I’ve already cut off my chain-link tie downs as there wasn’t enough room between the tie-downs and the fuel jug to get the hooks out effectively. I swung by Home Depot Racing Supply and picked up a set of D-ring tie downs, and cut the ‘legs’ off so that the D-rings would swing through the vertical axis instead of the horizontal, and will swing out of the way so the hooks can far more easily be removed. 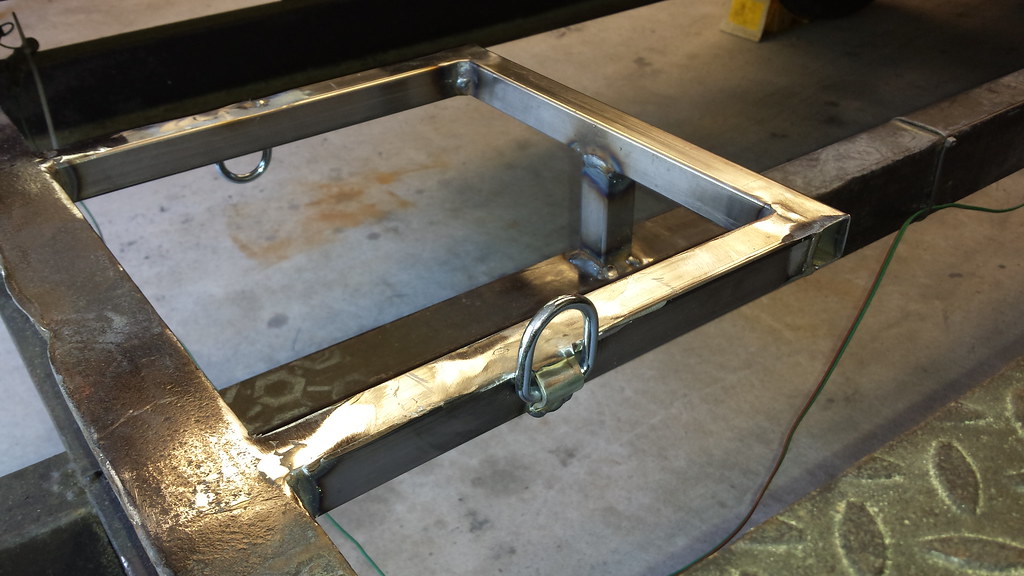 Sometimes I wish I’d kept more videos, but disk space ain’t free. I could put together a pretty solid compilation all the way back to the STS days of myself and my codrivers consistently missing 3rd gear and hitting 5th on faster courses. During normal driving it was never a problem, but when exiting a corner at an autocross at the top of 2nd gear, it seems like 75% of the time it just wants to go into 5th. After it still being a problem even with delrin engine and differential bushings, and a delrin shifter bushing, I decided to do something about it.

I’ve seen a couple on other cars, and borrowed a ideas from just about all of them. I wanted something simple (ie: that I could make myself), something easily disabled (reverse is often needed for getting around paddock & grid), and fairly easily removable.

First up was figuring out where to mount it. I played around with a couple different things and settled on having it reside between the transmission tunnel and the upper dust boot, on the passenger side, and use the 2 bolts for the dust boot along that side to secure it. A length of 1.5″ steel angle made a solid base for the lockout after a little love from the angle ginder. 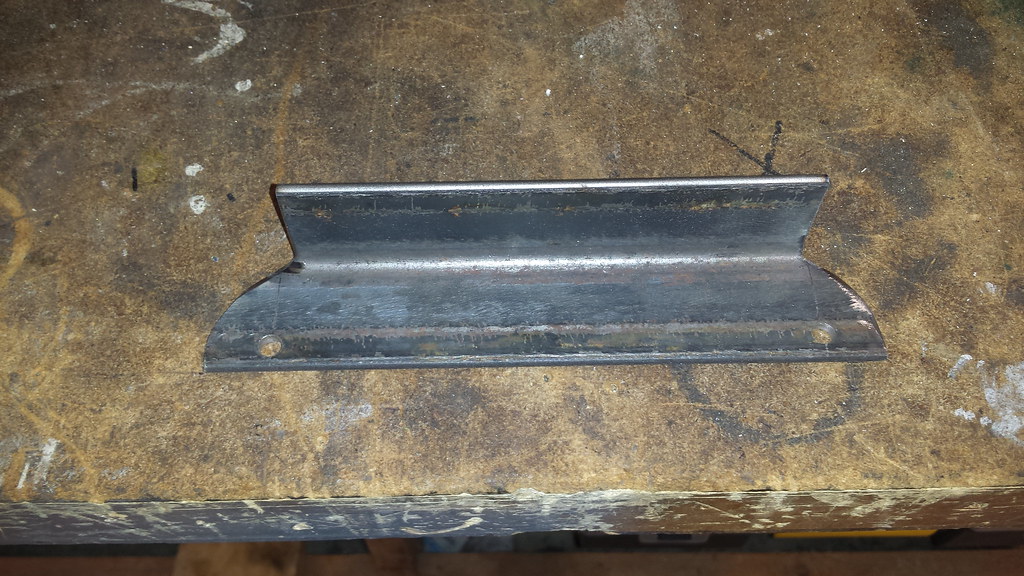 A 3″ or so length of butt-hinge left over from another project gave me more than enough width to cover the full throw of the shift lever, and would allow the devise to be easily swung ‘open,’ away from the shifter. 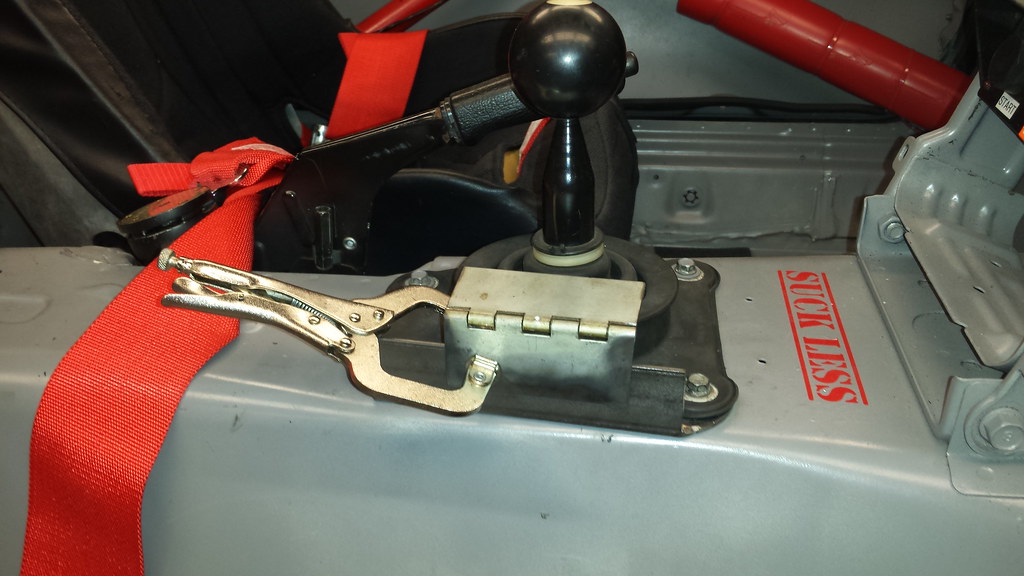 I didn’t want the shifter ever making metal-metal contact, so I grabbed (and then sacrificed) a cheap plastic cutting board to use as the bumper for the shifter to contact. 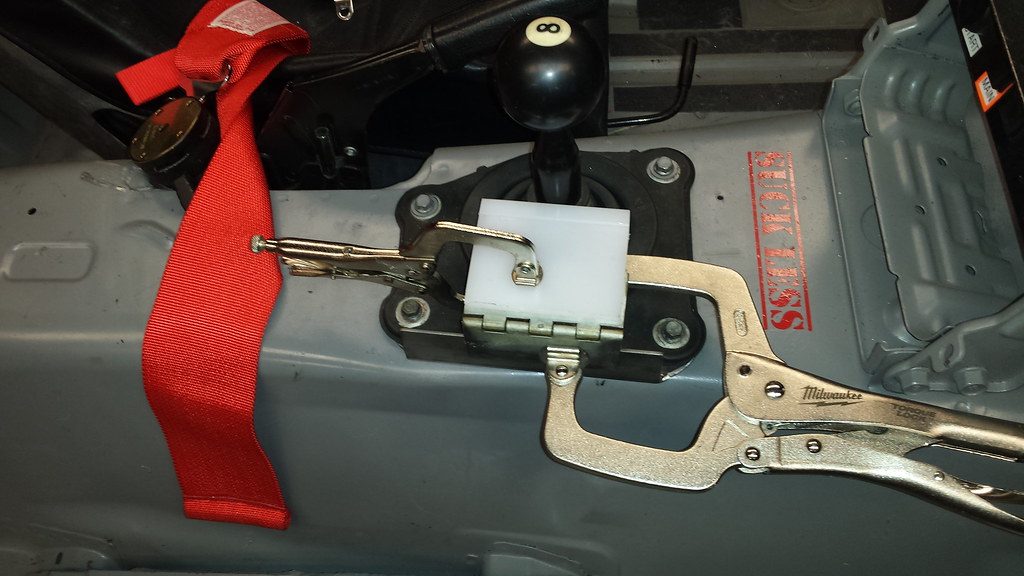 With the height and positioning set, I could stitch the hinge to the base: 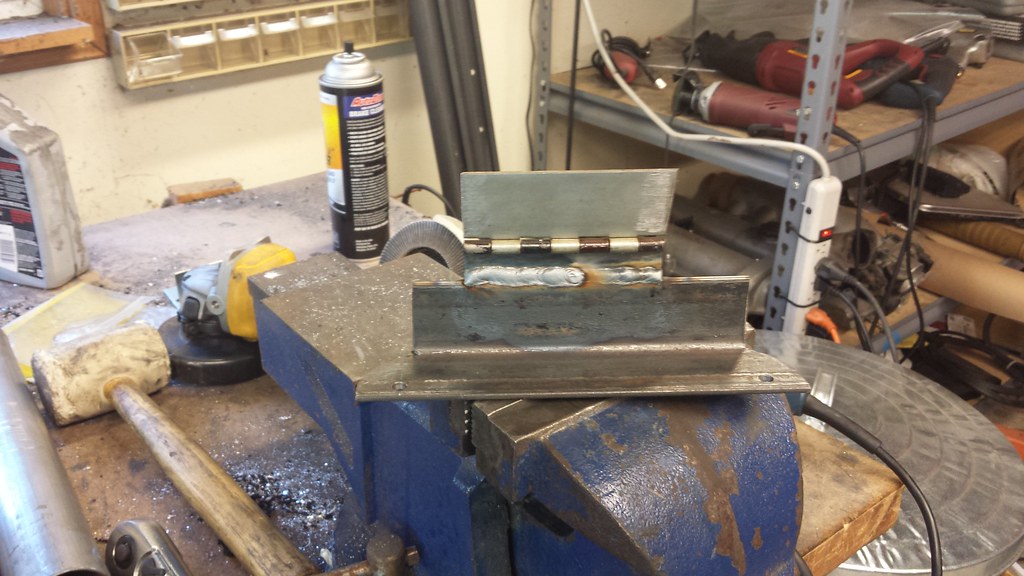 So that the bumper didn’t sit too low and contact the dust boot, I added a stop to keep it in place in the closed position. In the open position, the hinge runs out of travel and naturally stops at around 90°. 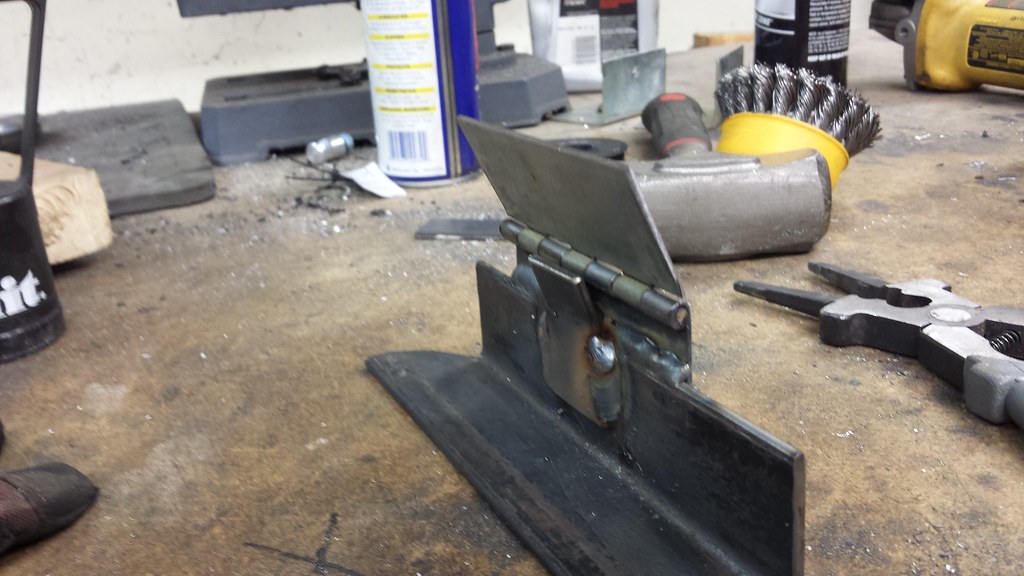 The thing was starting to get heavy, so the angle grinders and big drill bits came out to take some weight off. Here I’ve also added the spring retainers out of 1/8″ steel bar for a spring that will hold it steady at either end of its travel: 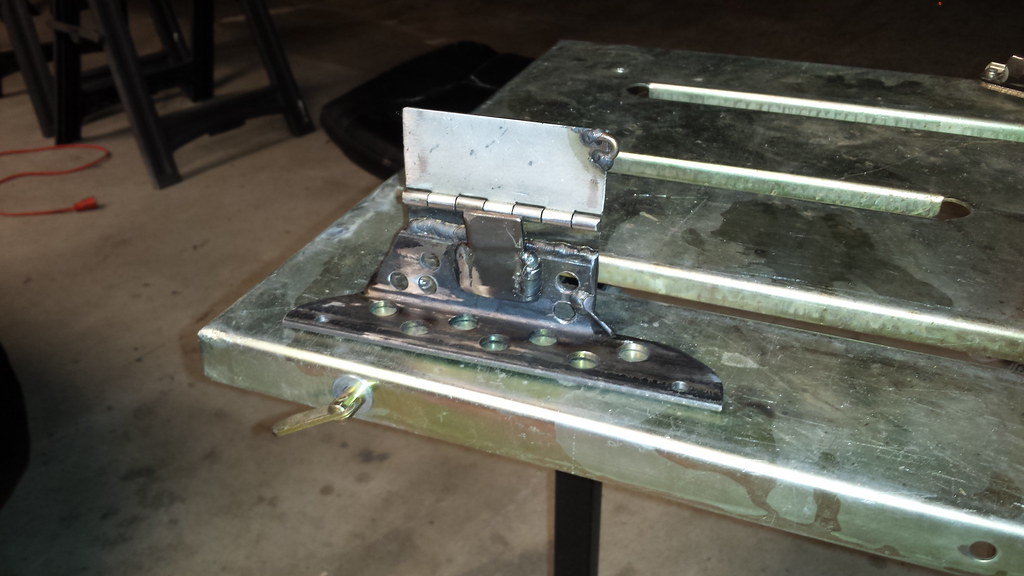 A coat of paint to keep the rust at bay, some final finishing on the bumper piece (it’s still completely flat throughout the full throw of the shifter), and final assembly, and it should be good to go. 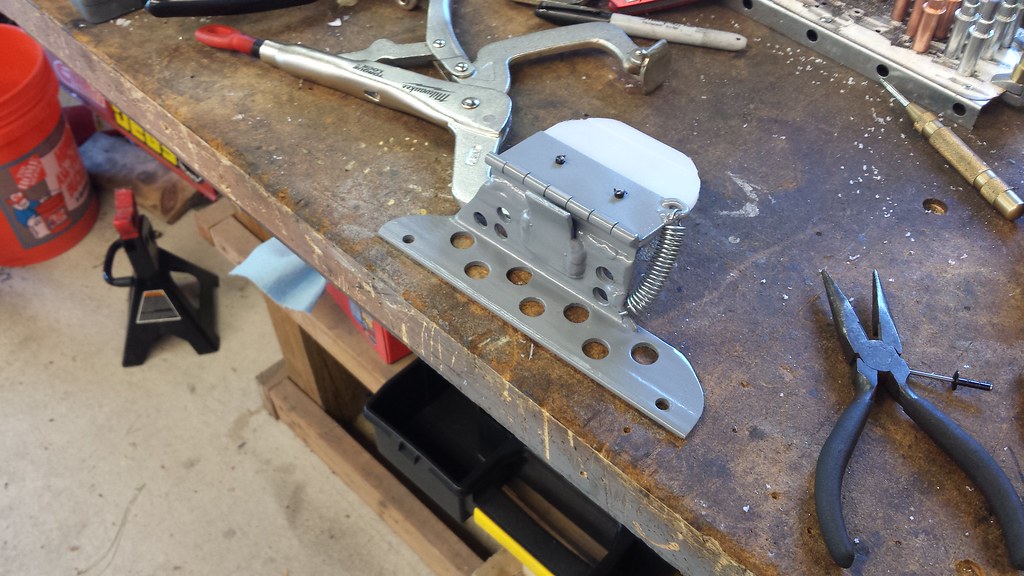 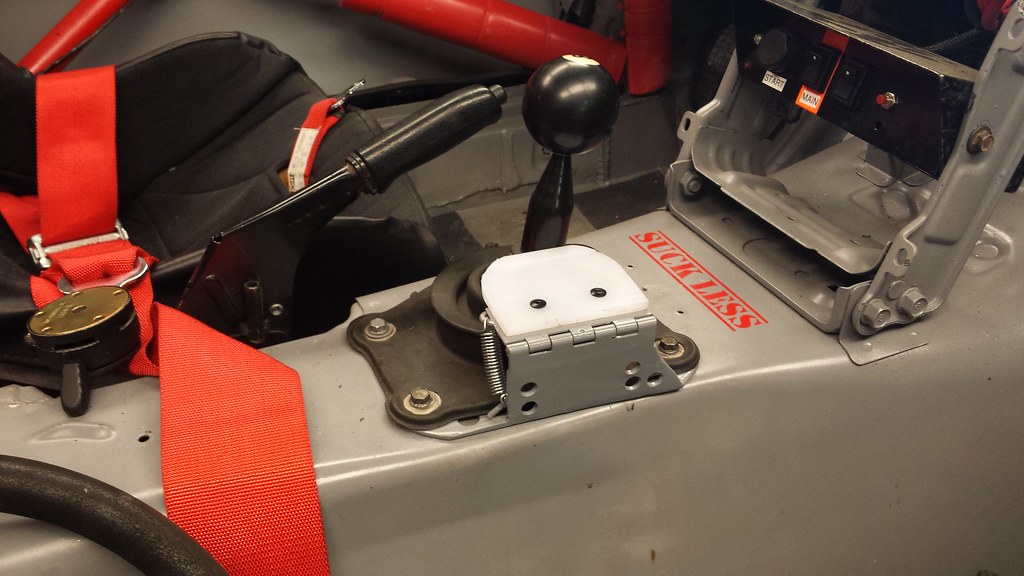 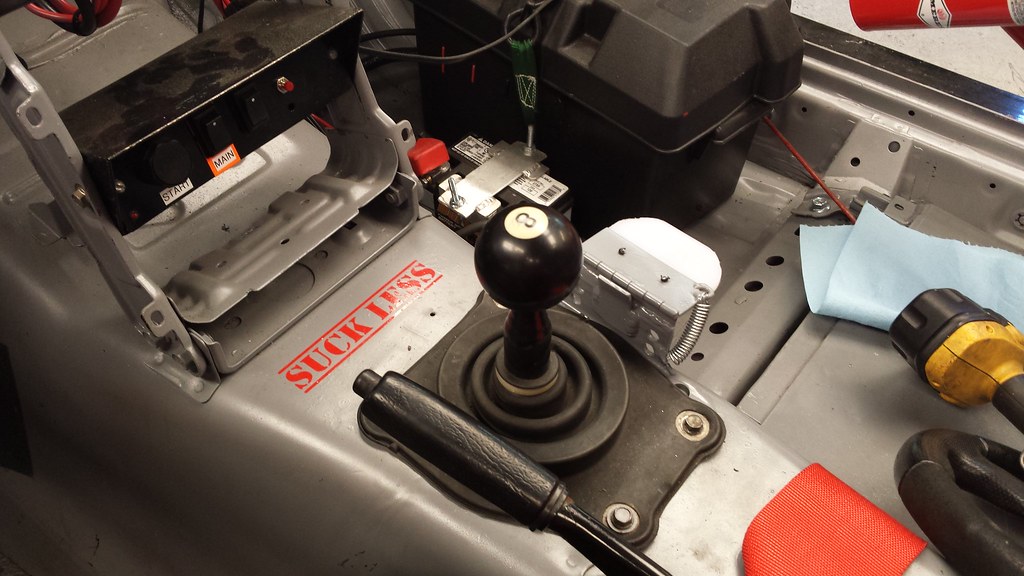 I’m really happy with how it came out. It looks a lot less hacked together than a) it is, and b) I expected it to look as it was starting to come together.

Here’s a quick video made towards the end of mocking everything up, after securing the bumper in what should be its the final position. Unforunately it’s just a static test, I don’t have a way of getting the car into a position that creates the 2nd > 5th problem safely in my neighborhood, so I’m not even going to try. However, it seems to work great. There’s about 3/16″ between the shifter and its resting place in 3rd gear, and that seems to be enough to where it doesn’t try and skip 3rd and get jammed in the gate to 5th / Reverse, but also isn’t resting against the bumper. In the video, I’m also being way rougher than I ever would in reality just to make sure it doesn’t try and skip the 3rd gear gate.

I’m really pleased with how positive the action is, and how well it sits against the stops. I was worried I’d need to add a second spring (like in the example linked to earlier), but it’s nice and snug without being too hard to flip to the open position.

The 1st event we ran this at resulted in nearly worse performance. After doing some testing, it became clear that it was actually guiding the shifter into hitting the stop between 3rd and 5th. To make it work, with the shifter in neutral, the lockout actually needs to push the shifter a bit towards the 1 / 2 gates. It turned out that we didn’t actually need it at our last event, however we tried it out on first runs just to see, and now it’s guiding directly into 3rd under load. Success!

Ever since putting in the VVT motor, my header situation has been sub-optimal. It was a Jackson Racing header (with the EGR fitting removed) which was better than stock, but it had a good bit of weld on the inside of the primaries directly in front of the ports. That big ridge is not great for flow: 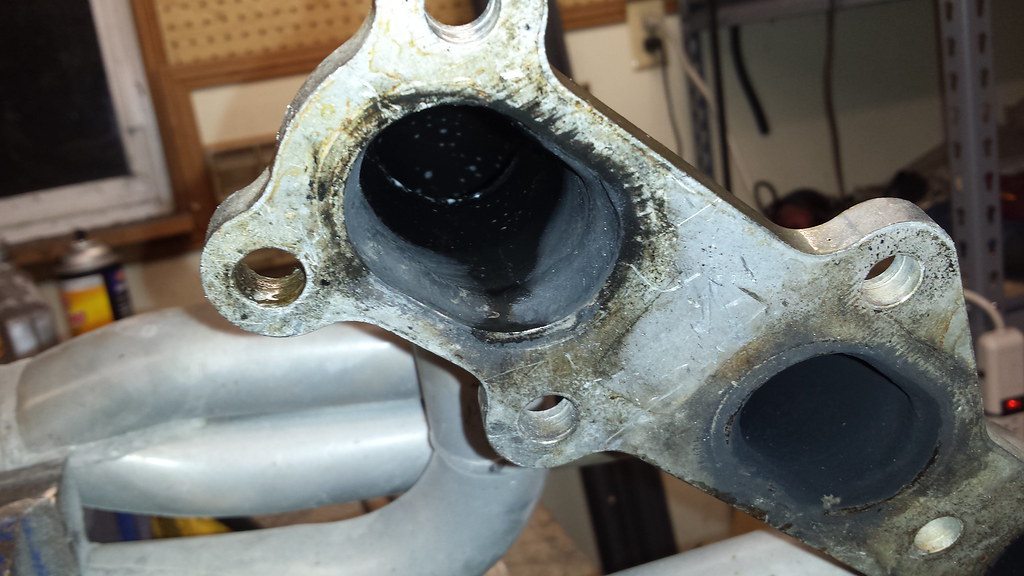 I managed to work a deal on a Maxim Works (Mazdaspeed branded) NB header from JDM Land. Check out how clean the transitions from the flange to the primaries are: 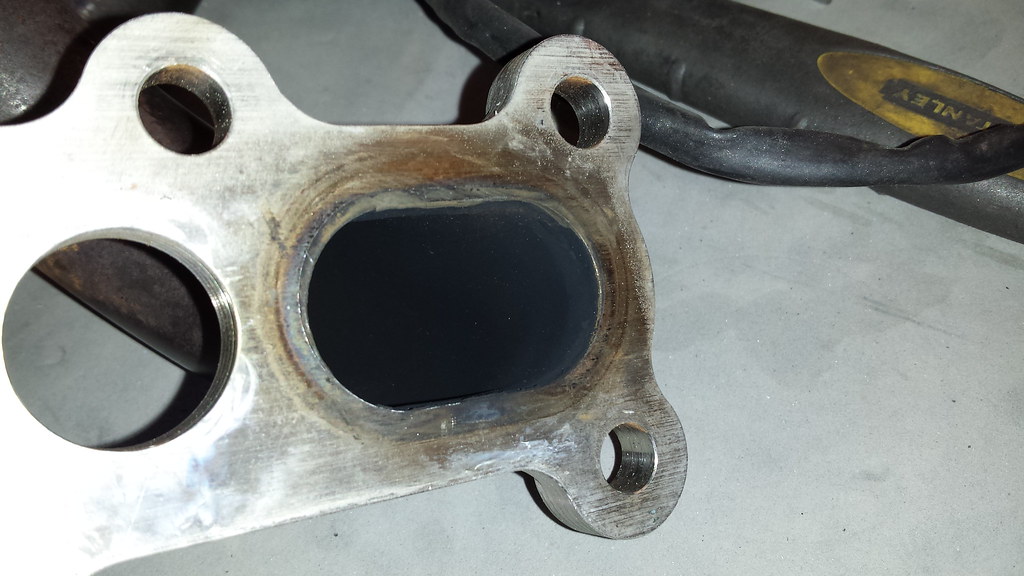 After cleaning up a bit of surface scale with the wire wheel, it dropped right in. The JR basically had to be wrestled out. One more reason I like the Maxim Works better. And for what they cost new, it should be better. 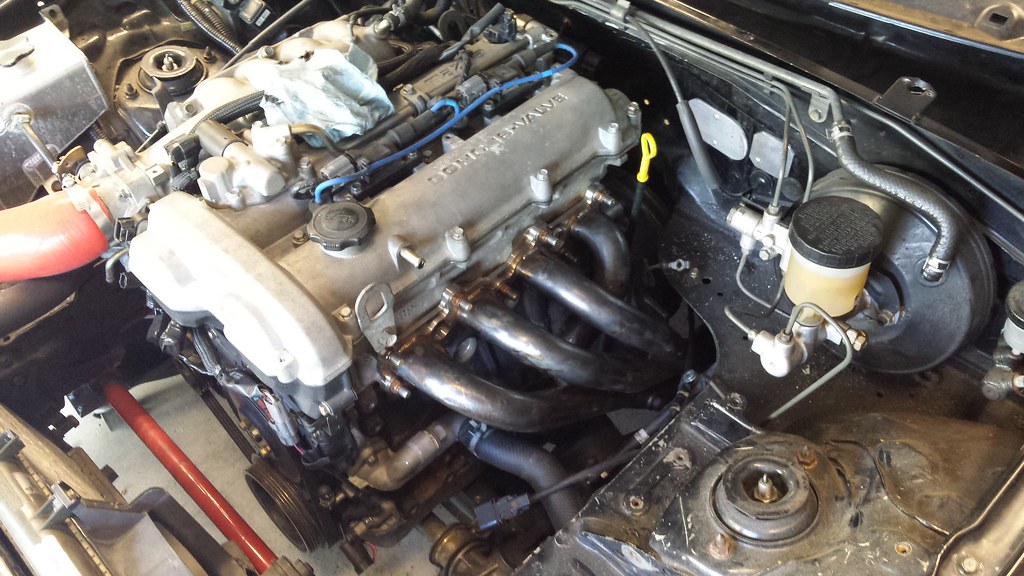 Unfortunately, but also kind of fortunately, the flange and gasket type on the Maxim Works is completely different (round vs donut on the Jackson Racing), so a new cat-delete pipe had to be whipped up.

You’ll note that this is the 3rd or 4th iteration of the cat delete pipe, depending on how you’re counting. So while I dreaded the job a bit, I was also looking forward to doing it right. The exhaust hung a lot better with the last version than it did with the first version (not that it was a particularly high bar to meet…), but it still scraped the cat-back portion at the top of my hill coming out of the shop, so I wanted to make triple sure that there wasn’t something else amiss.

There was something else amiss. The cat-back is a slip-fit with the axle back, and is secured by a large band clamp. Works fine, but doesn’t lend itself to repeatable installation, apparently. Because it turns out that the last time the exhaust was out (who knows how long ago that was), when I reinstalled it, I clocked the cat-back incorrectly into the axle-back, and it was tweaked in a way that forced everything lower than necessary.

This photo, by way of comparison, is with the new mid-pipe tacked up and bolted in place, and is taken by a lower angle (showing more of the exhaust) just so you can see some of the exhaust towards the right hand side: 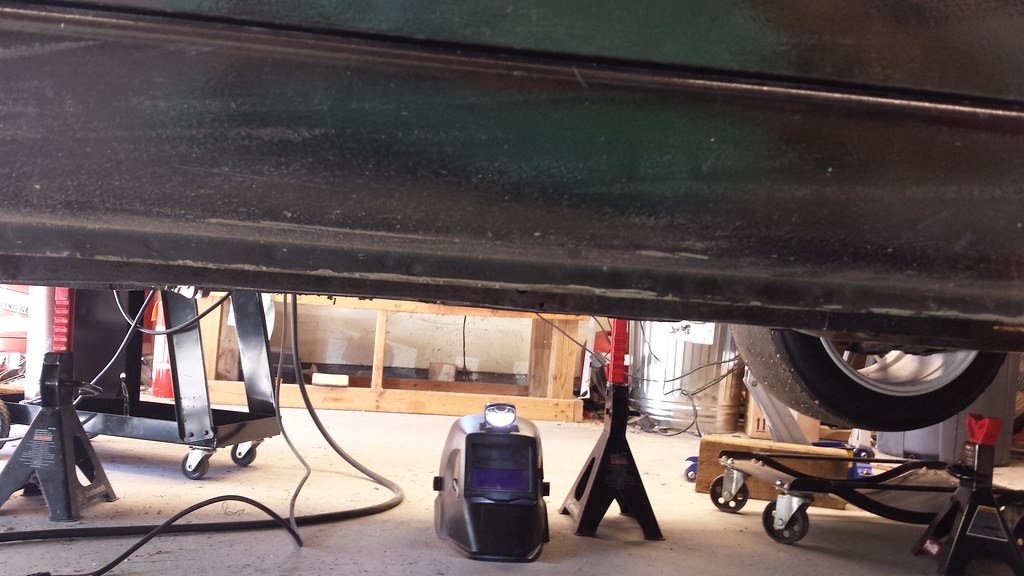 That is WAY better, and should pretty well cure the scraping issue once and for all.
It also appears that I AM capable of learning from my mistakes. Instead of the pie-cut and poorly fit nonsense from before, I got it in 2 sections (with a small mandrel bend on each end, slip-fit flanges, and flared 1 of the tubes just enough that the 2 pieces were nearly a slip fit. That allowed for a bit more flexibility in fit up, and a much stronger weld (lap weld vs butt weld). And because occasionally the kids let us sleep these days, I managed to put the flare on the downstream side so it would flow more smoothly (ie: into the flare) instead of tripping over the hard edge of the downstream tube if it were flowing out of the flare. 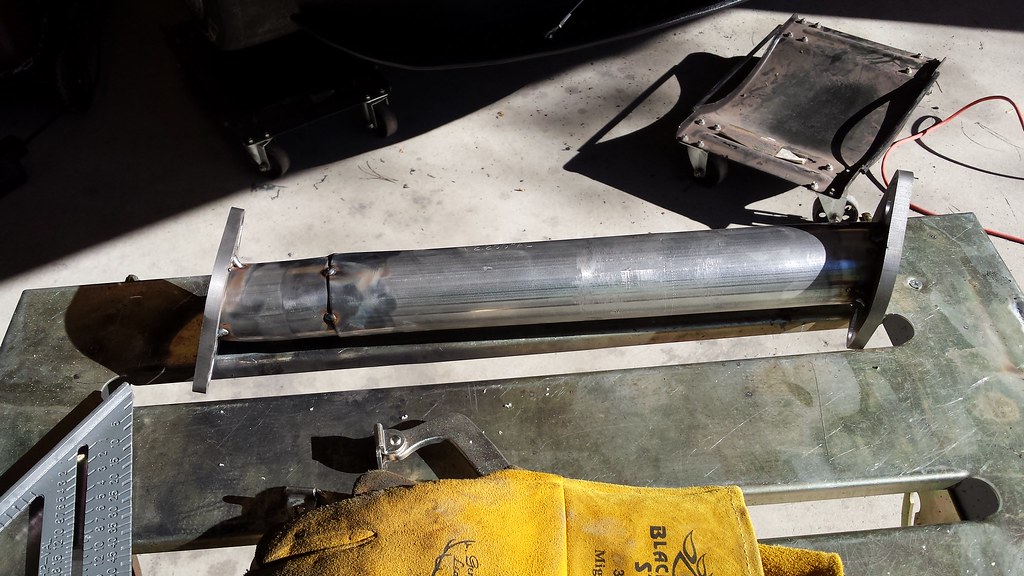 The slip fit flanges allowed a ton of freedom when fitting everything up, to the point that both flanges had maybe 1/16″ of tubing sticking out past the flange to get the correct angles. A flap disk trued everything up nicely. 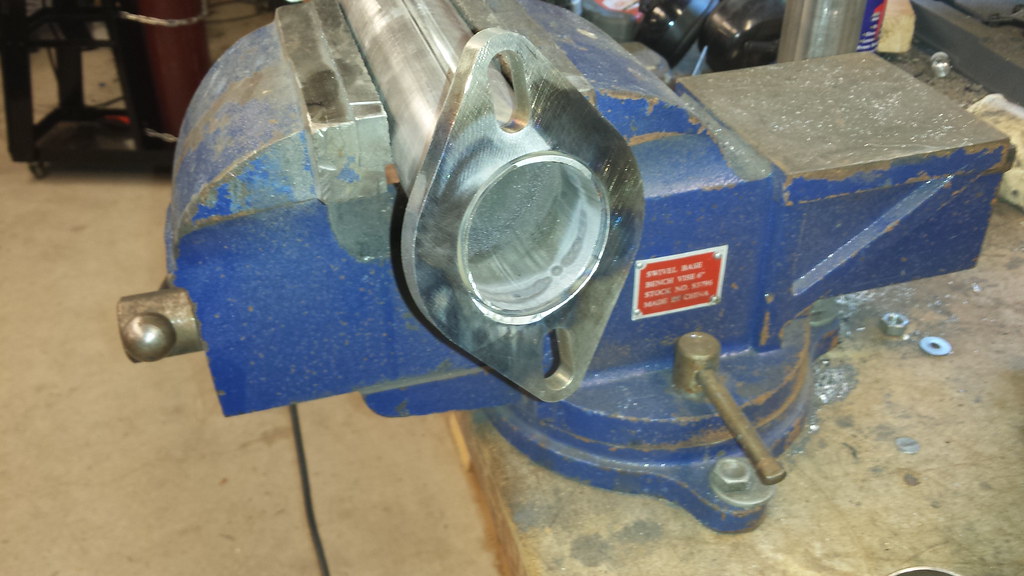 And finally, after a final test fit and a bit of grinding to clean up some booger-welds where I had to clean up after blowing through the tubing, a coat of high-heat paint to keep everything shiny. 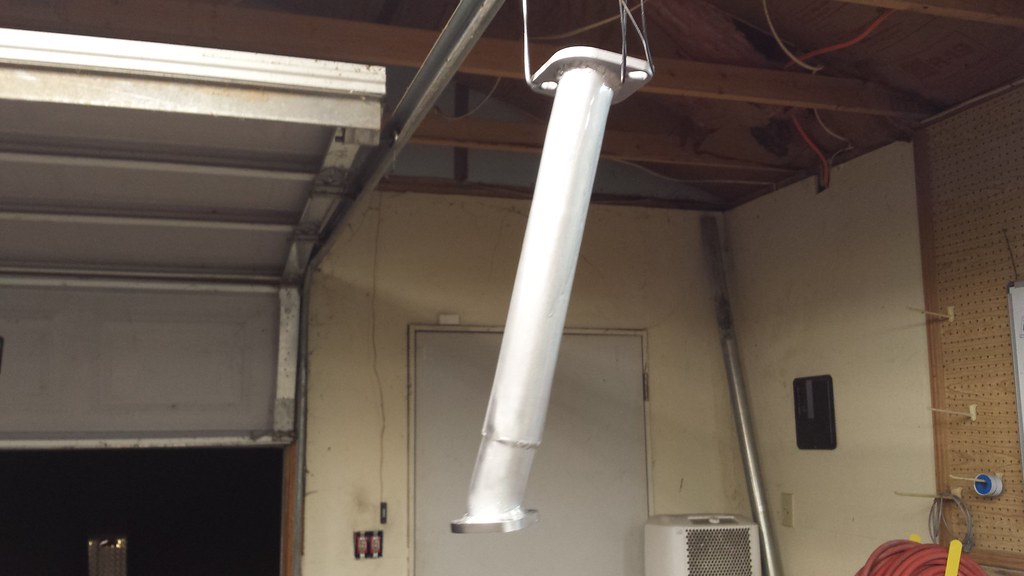