After last season, Splitter V1.0 was seriously trashed. Placed on a flat surface, there was almost 2″ of bend across its width, so at a minimum I had to replace what was there. At a maximum, it was time for a complete rethink.

It was definitely time for a complete rethink.

So, based on what I’d learned making and repairing the first one, I set about replacing every single component save the 2 quick release pins. I didn’t intend for it to be that thorough of a redesign, but during the offseason, if there’s opportunity for improvement “while I’m in there,” you might as well take advantage of that.

These were the pieces I had far and away the most trouble with last season. They were not adjustable, so once I eyeballed the height the 1st time, that’s where they lived. Furthermore they were difficult from a maintenance perspective, a once you hit something hard enough to bend them, the only thing to do was attempt to beat them straight with a hammer, or completely re-build them. There had to be a better way.

This piece took a bit of evolutionary engineering, but I think the result will be up to the task. You can see V1.0 on the left, bent in a couple different directions, and very unwilling to be bent back straight (especially along the longer edge).

Instead of having a single piece mount, I decided to make a very strong mount to the chassis, with weaker sacrificial hooks to take the brunt of any larger impacts. The hooks are very easy to remove & replace, and to manufacture. The hooks are simply a length of 3/8″ threaded rod, and a short bent piece of steel round bar. 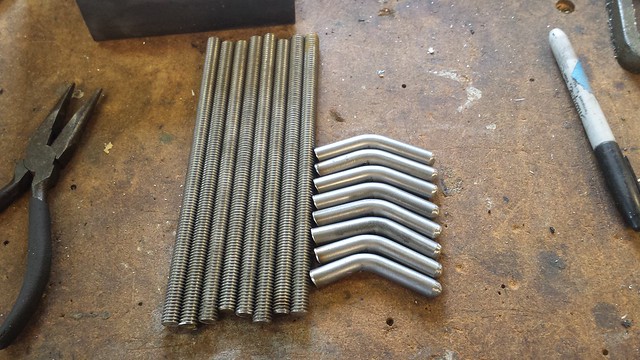 A quick bit of welding and I have (what I hope to be…) a season’s worth of replacement. Hopefully more. 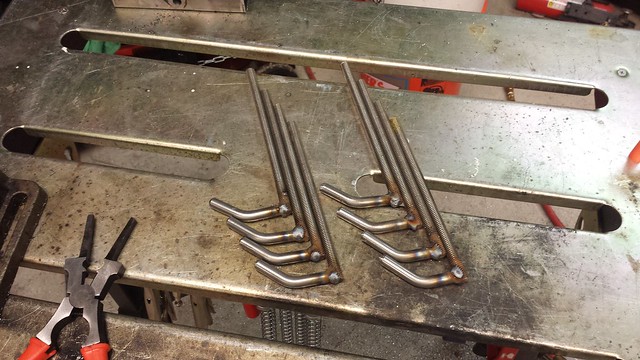 After a bit of time on the drill press and a coat of Machine Grey, and the chassis mounts are done. 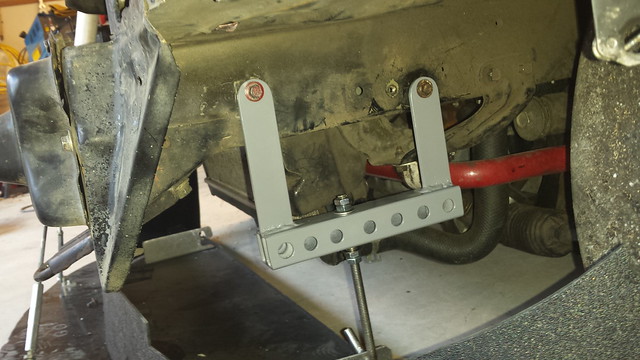 The Hooks on the splitter that held it onto the chassis mounts also took a beating last year. Also, their geometry meant that with a good bit of load on the front, the rear hooks would lift off of the mounts. Unlikely to happen under real world conditions, but also suboptimal.

Given that, I went with stronger material (1/4″ Aluminum, up from 1/8″), and a more angled hook design that keeps it located both horizontally and vertically.

After a bit of figuring, this was the design I came up with. The bottom 3 holes are 1/2″, and the top one 3/8″ to tightly hold onto the chassis mounts. 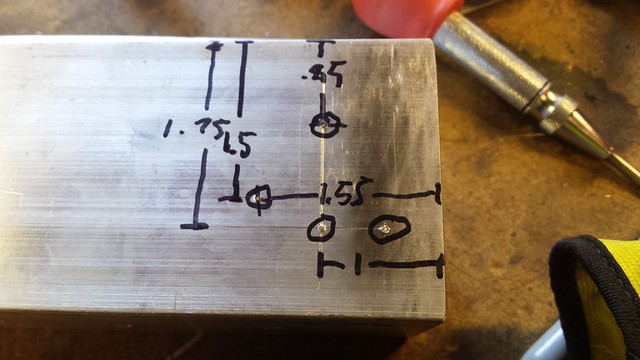 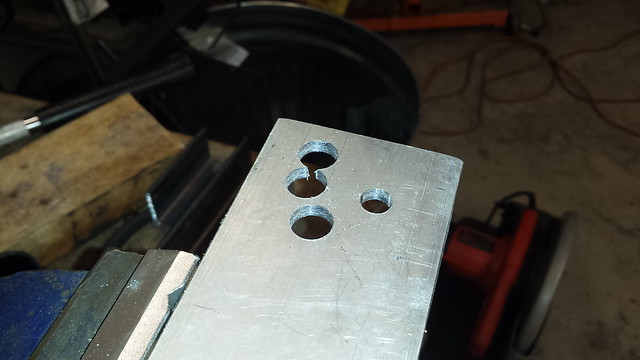 After a bit of cleanup and fitment testing, these are complete: 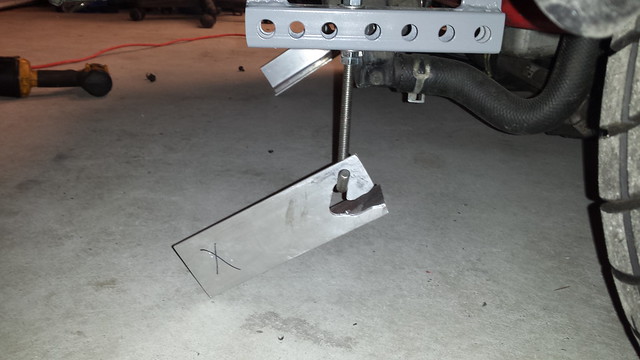 The front chassis mount (under the front bumper) has always been a pain. It allowed for no deflection (which meant bent front splitter struts), and because they only had 1/4″ holes for the quick-release pins, they were very finicky to get everything lined up with.

Inspiration from this came from a relatively prestigious place: The Dodge Viper ACR. I noticed that it had a mount that’s basically only rigid when downward load is put on it (ie: aerodynamic load), but would allow for upward deflection (ie: for off course excursions) to prevent the struts from taking all of that strain.

Here’s what I came up with. The D-rings are completely rigid in tension (ie: aero load), but will allow for deflection (ie: bigger cone strikes or bottoming) to hopefully prevent bending the struts. As an additional bonus, the target I’ll need to hit in order to mount the quick release pins is orders of magnitude larger, which will make mounting the splitter at the track far easier. 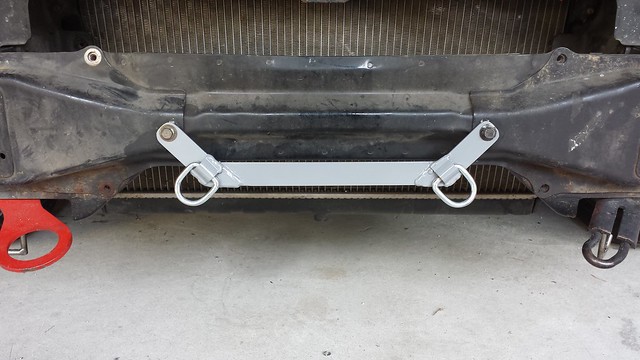 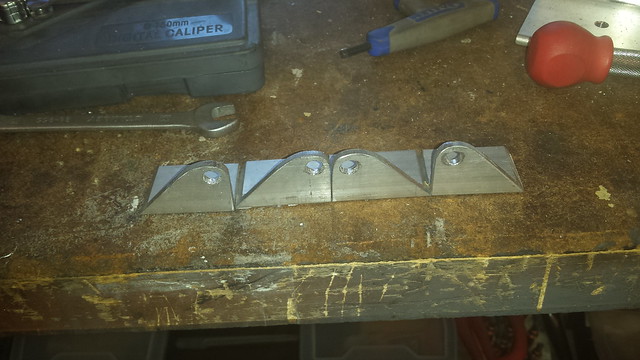 I also found some turn-buckle rigging forks on Amazon that, with a little bit of drilling and welding, I was able to make into a pair of new front struts.

Part 5: The Splitter and Final Assembly

Finally, we get to the splitter itself. Using the laminated sheets of DiBond ended up being both a ton of work, and fairly ineffective. After the rigors of the season, the bottom sheet was fairly worn down (another casualty of non-adjustable rear mounts) and it never was as stiff as I would like.

After consulting with some buddies who know more about this stuff than I, I decided to go with 1/4″ Dibond. The single 1/4″ sheet is far sturdier than the laminated 1/8″ sheets.

The first step was to make cleaner (and thicker) buck for the splitter. The lines on the 1st one weren’t all that clean. This will make for fairly quick & easy replication with a router & a flush-trim router bit. 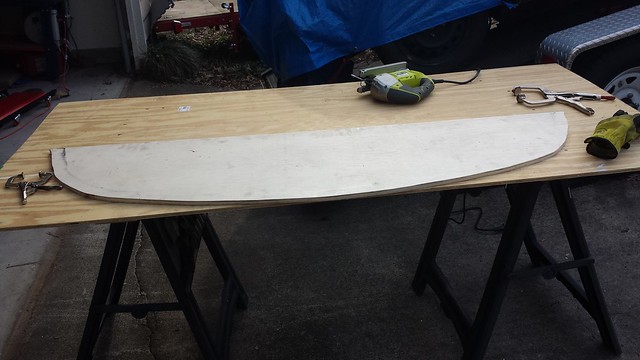 I picked up a brand spankin’ new sheet of 1/4″ Dibond, and we managed to cut 3 splitter blanks out of it, then trimmed them down with the router. It’s a super dirty process, but it is super effective. 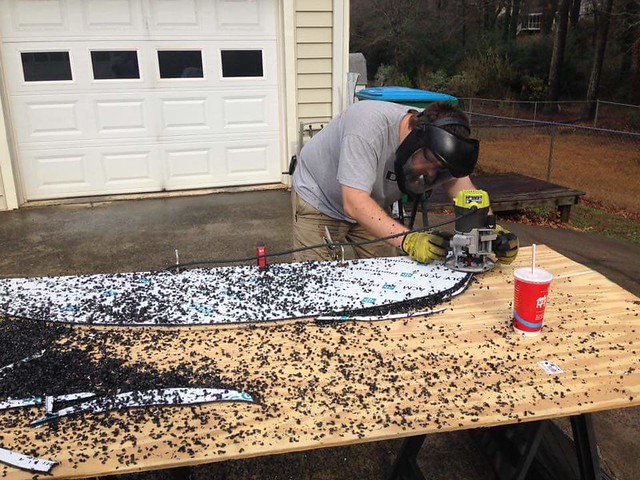 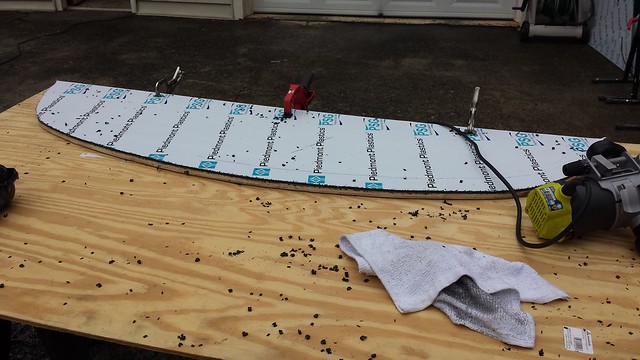 Instead of using sections of the Home Depot Racing Supply paver edging for the air dam, I went ahead and used the whole one (so it would be more rigid), then we riveted the original air-dam to it to use for mock up, to then make a pattern (and buck) for a new design: 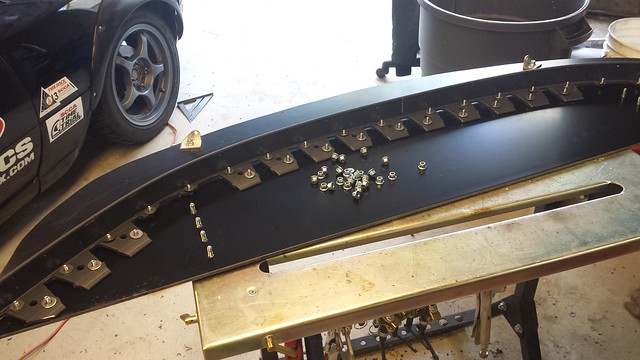 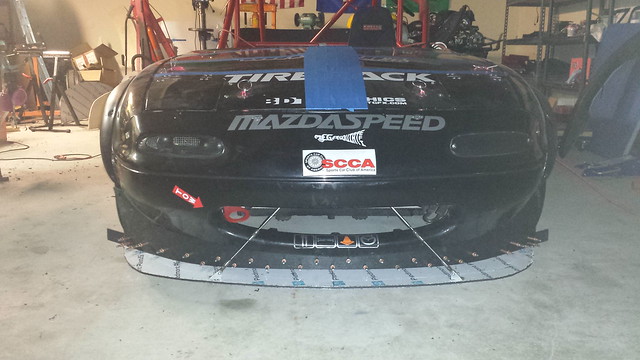 Once all the mock-up was done, it was time to disassemble the whole thing and put the “real” parts on. All of the parts were mounted using elevator bolts.

I made a spacer to use with a nut and a washer stack to pull each elevator bolt into place: 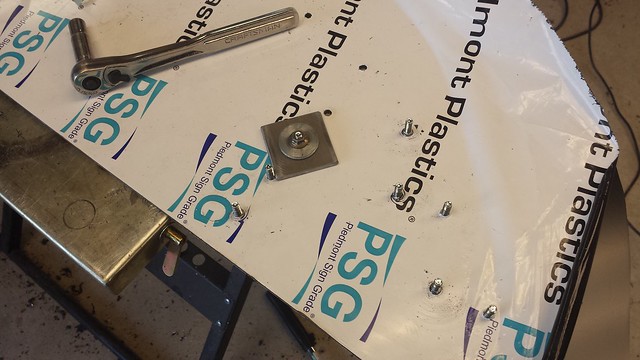 After a bit of sweat equity, this is what the bottom looks like. The nice thing is that they have very thick bases, which allows them to serve as something of a wear surface without sacrificing too much strucutral integrity, as opposed to using button head bolts, which have much less metal to wear down before they’re rendered useless. 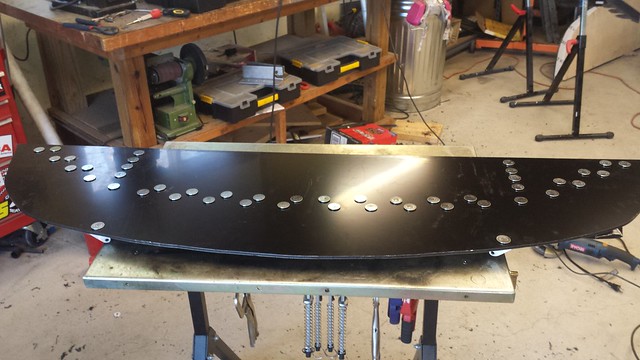 With the base complete, we used Clecos to temporarily rivet everything together… 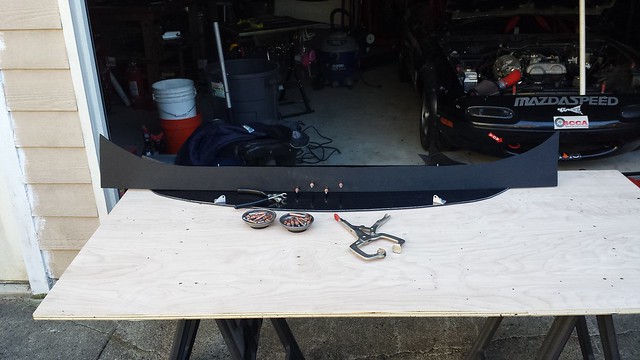 And then finally completed assembly and riveting, and got it mounted in place: 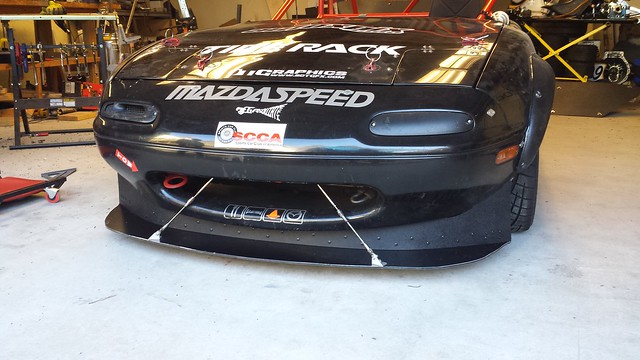 It was a ton of work but now that I have a good, solid design, replicating it will be relatively straight forward. Hopefully I don’t find any crazy weaknesses with this design that’ll require another complete rethink.

After last season, the old ATV / lawn tractor battery was getting a bit long in the tooth (and in the start…). Battery tech has made huge leaps over the last 5 years, and the trickle-down from that has been absolutely astonishing. Where I used to put up with 120 CCA out of the ETX-9 because it was, at the time, lightweight and fairly affordable, for not much more money I can have something that weighs 1/2 as much and puts out 3x the CCA.

I went ahead and snagged a Battery Tender 360 CCA LiFePO to see if the new tech was all that it’s cracked up to be. I clearly have little long-term experience with it, but near term, man does it get the engine fired up quickly.

The other big advantage? 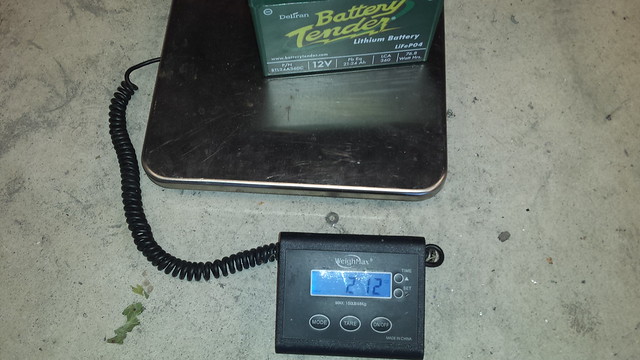 Less than half the weight. It almost feels like a toy.

A couple small tweaks to the battery tie down bracket were needed as we took advantage of a notch in the ETX-9 to locate it on the bracket that the Battery Tender doesn’t have. Fortunately its footprint is marginally smaller, so the already cramped space for the battery wasn’t a hindrance.

And with that, a small milestone was reached. On January 18th, the race car cranked up for the first time this year putting me miles ahead of where I’ve been in the past.  The alternator / WP belt needed a bit of an adjustment (something I’d forgotten it needed at the end of last year then forgotten), but now she should be good to go.

It’s been a minute since my last update, but I’ve been making a bit of a mess in the workshop during the offseason. 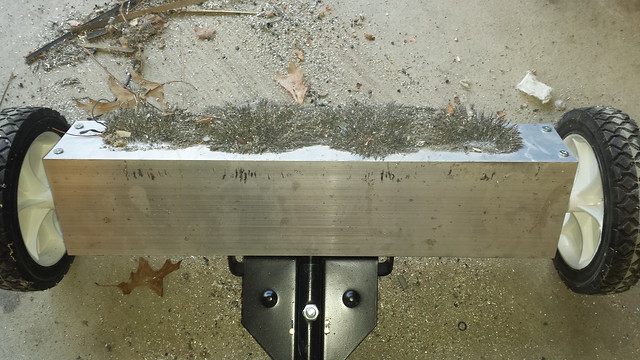 More to come on that later.