Many moons ago, a buddy posted a few pictures to Facebook of his car on some setup / alignment pads. My curiosity piqued, I reached out and got a bit more info from him, as something similar would be phenomenally useful. I’d looked at commercial options for these, but they are prohibitively expensive, and John’s homebuilt pads looked pretty close to what I wanted for a lot less money.

After a great deal of figuring and bouncing ideas off of engineer friends, it became clear that a set could be made that would also incorporate setup scales, for relatively little cash (and a great deal of time….so, so much time). Initial designs were drawn up and steel ordered.

What follows is going to be a boatload of photos of various stages of the build. It was a very very long process of evolutionary engineering and problem solving, but now that I know how to build them, additional sets will be made relatively (and it is very relative, because they’re a ton of work) easily.

First step: getting a bunch of steel home. I had various pieces cut more or less to length, as I didn’t know exactly how they would go together but had a general feel for at least what the long legs needed to be. The rest were cut to fit in the back of the truckster to get it home. 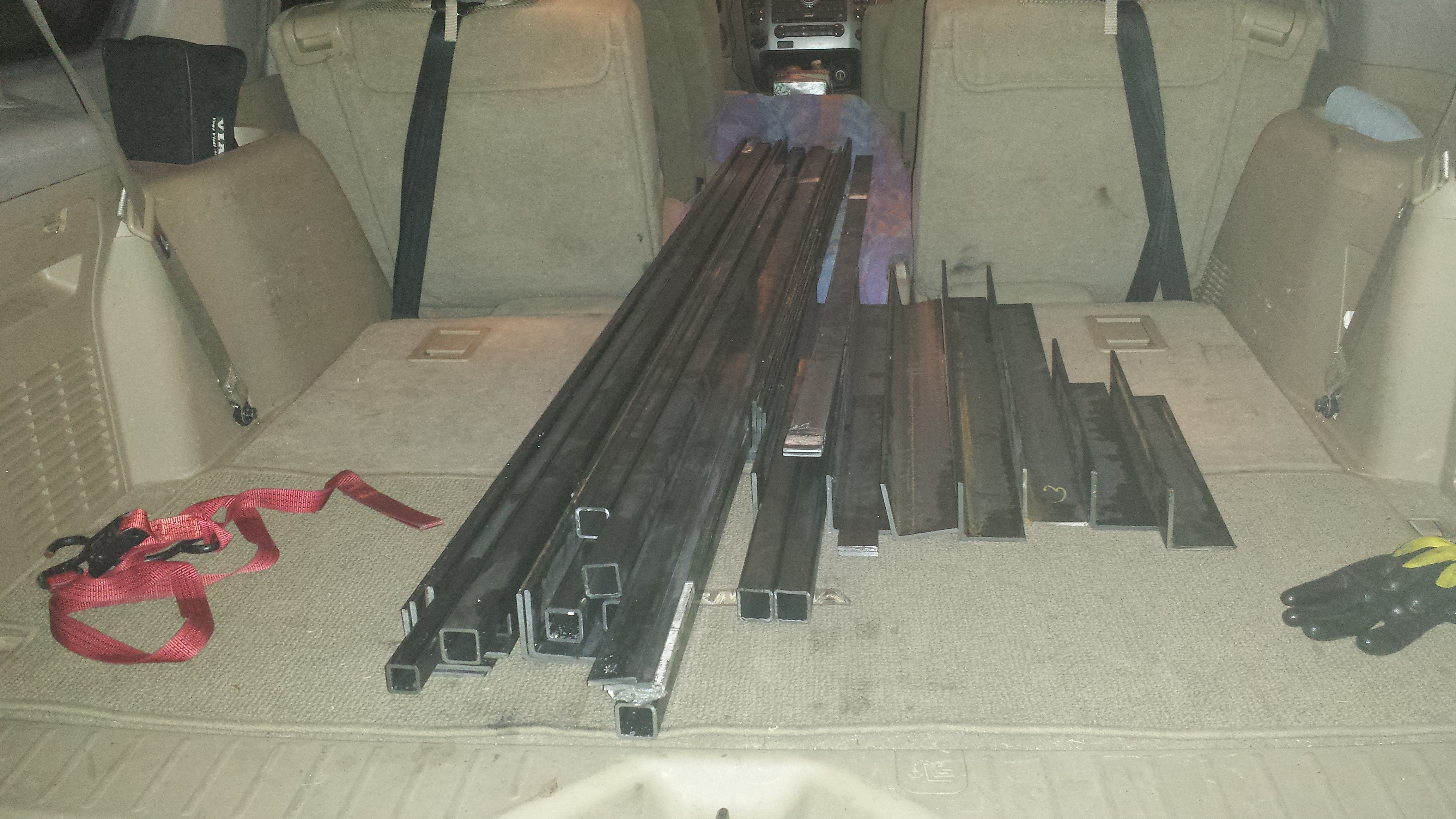 Lots of measuring (way more than twice), cutting, coping and beveling later, and the first frame was roughed out. 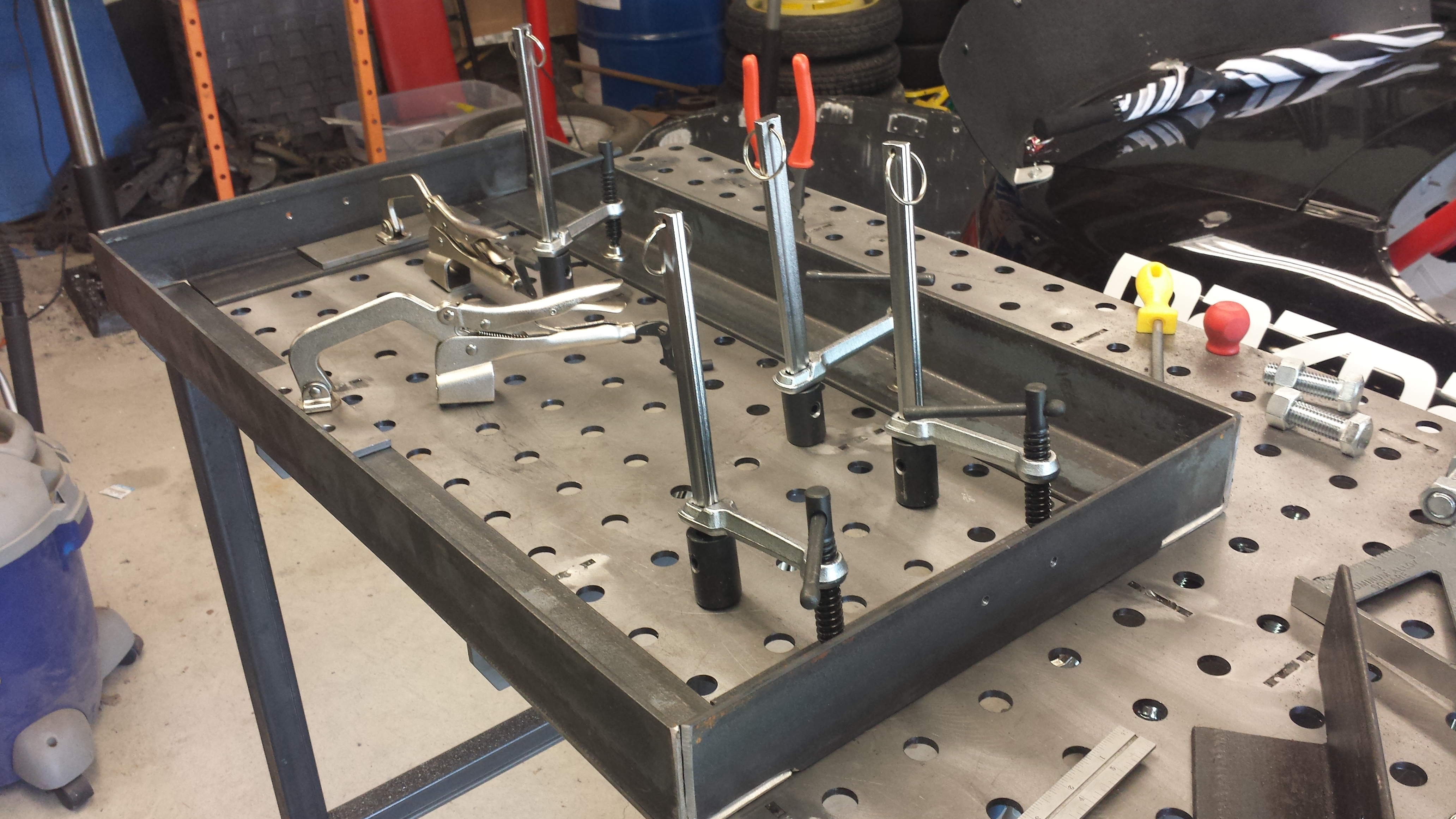 The scales will sit on the side with “floor” on all 4 edges, and the rolloff pads will go opposite them. 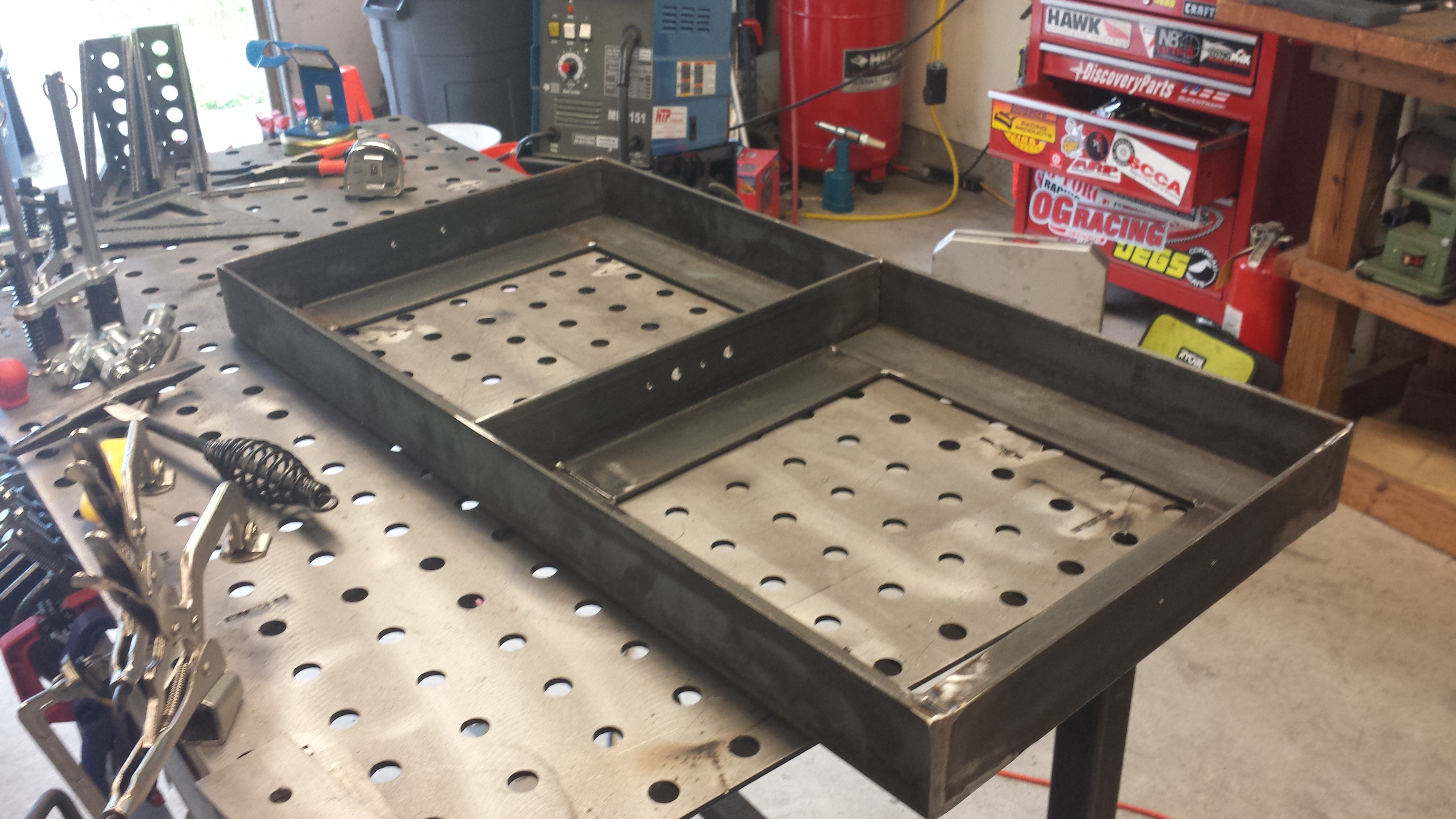 Cutting 45 degree miter joints would have been far easier from a fab standpoint. However coping the joints has 2 very big advantages: it leaves nice, flat areas on each end of the “long” side of the frame for the legs to sit on, and with that, there is a lot less strain on the welds and puts everything in compression, with the welds mostly holding the pieces together, and not supporting the weight of the car.

It’s not that I don’t trust my welds, but with something that needs to hold the weight of a car from crushing me to death, I will take every bit of added strength I can get. 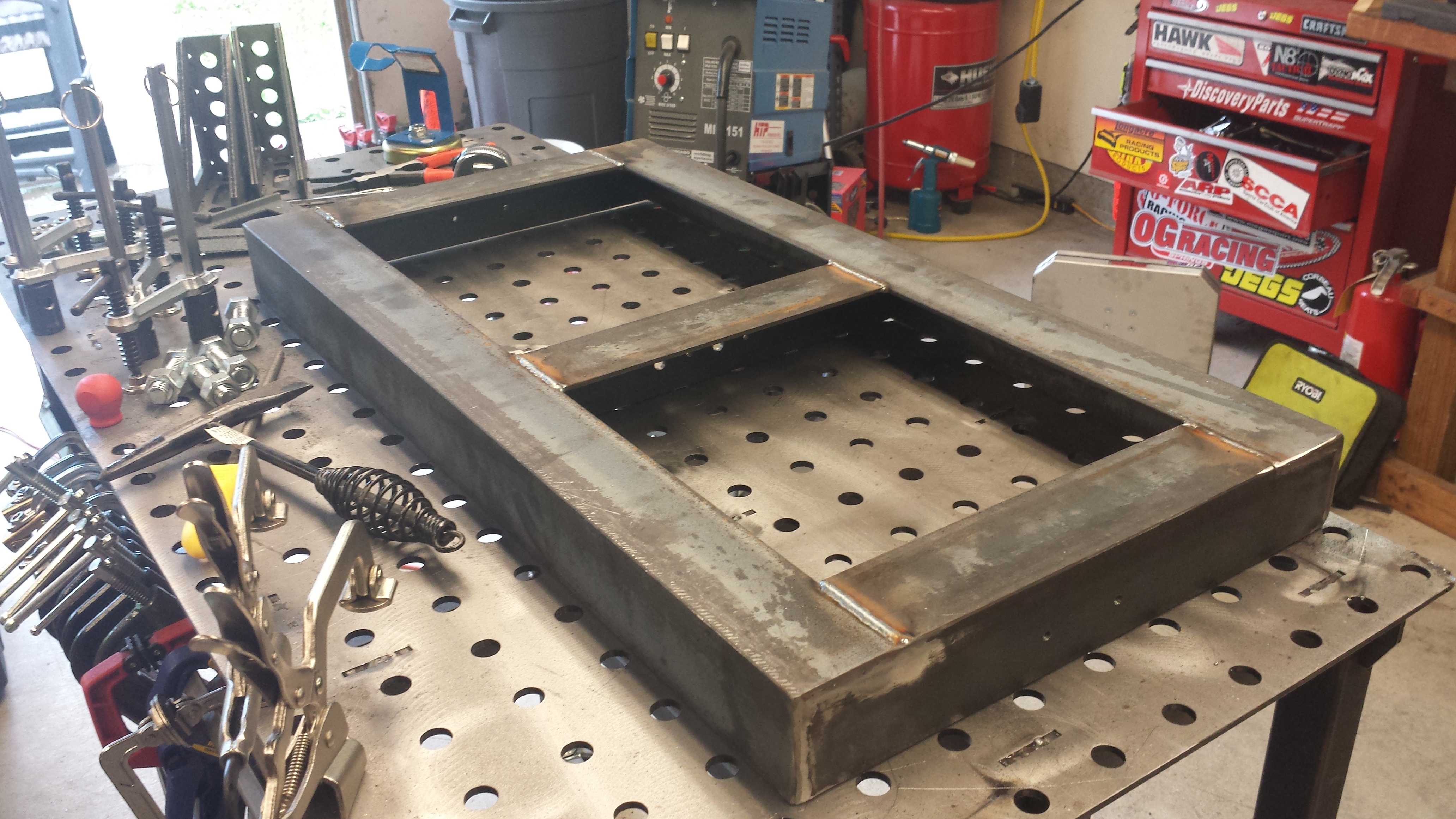 A quick test fit was very encouraging. My measuring a dozen times lead to a fit that allows the scale pads to rock in and out easily, but not enough that they can move around too much. 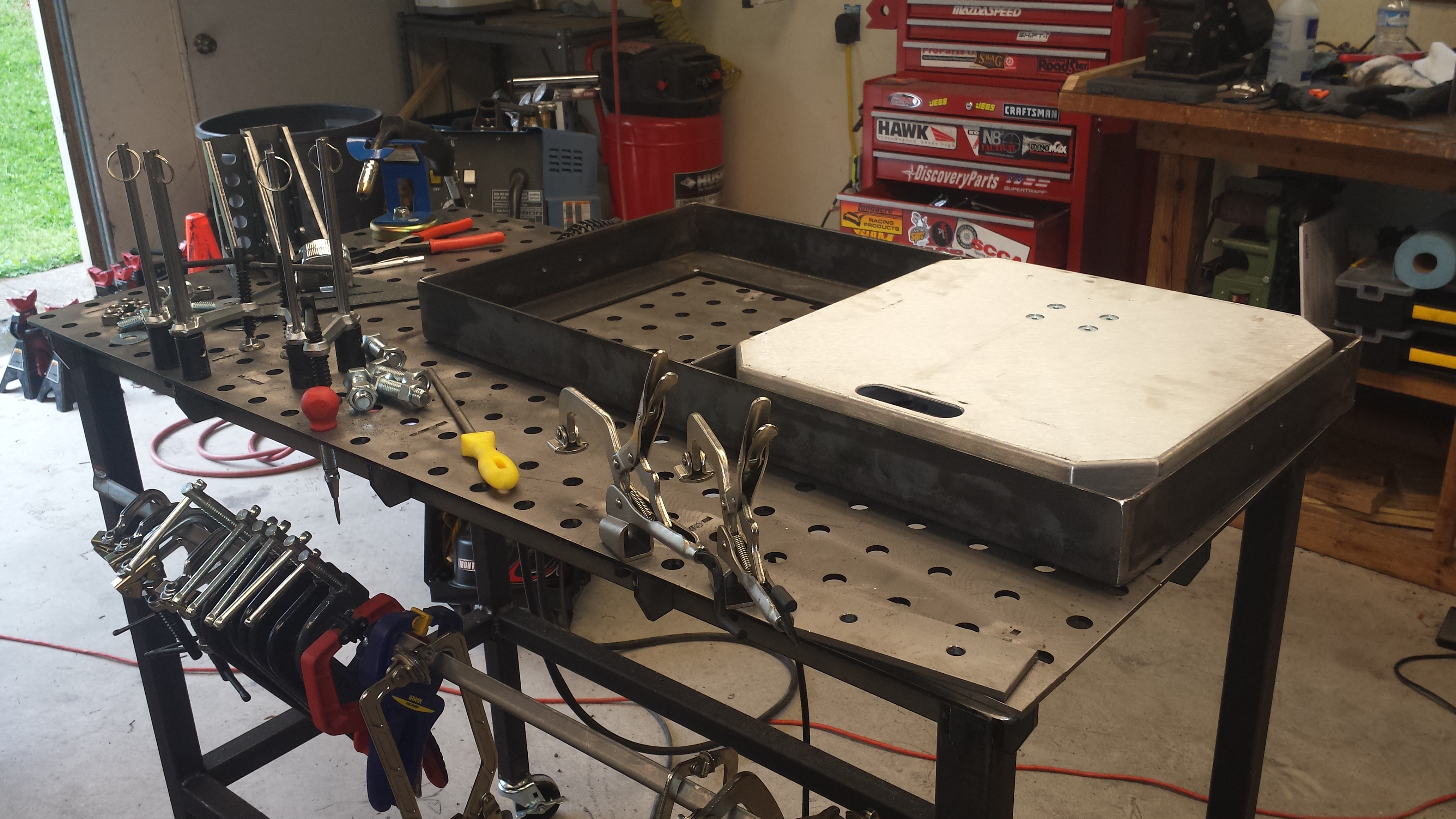 Mocking up the legs: 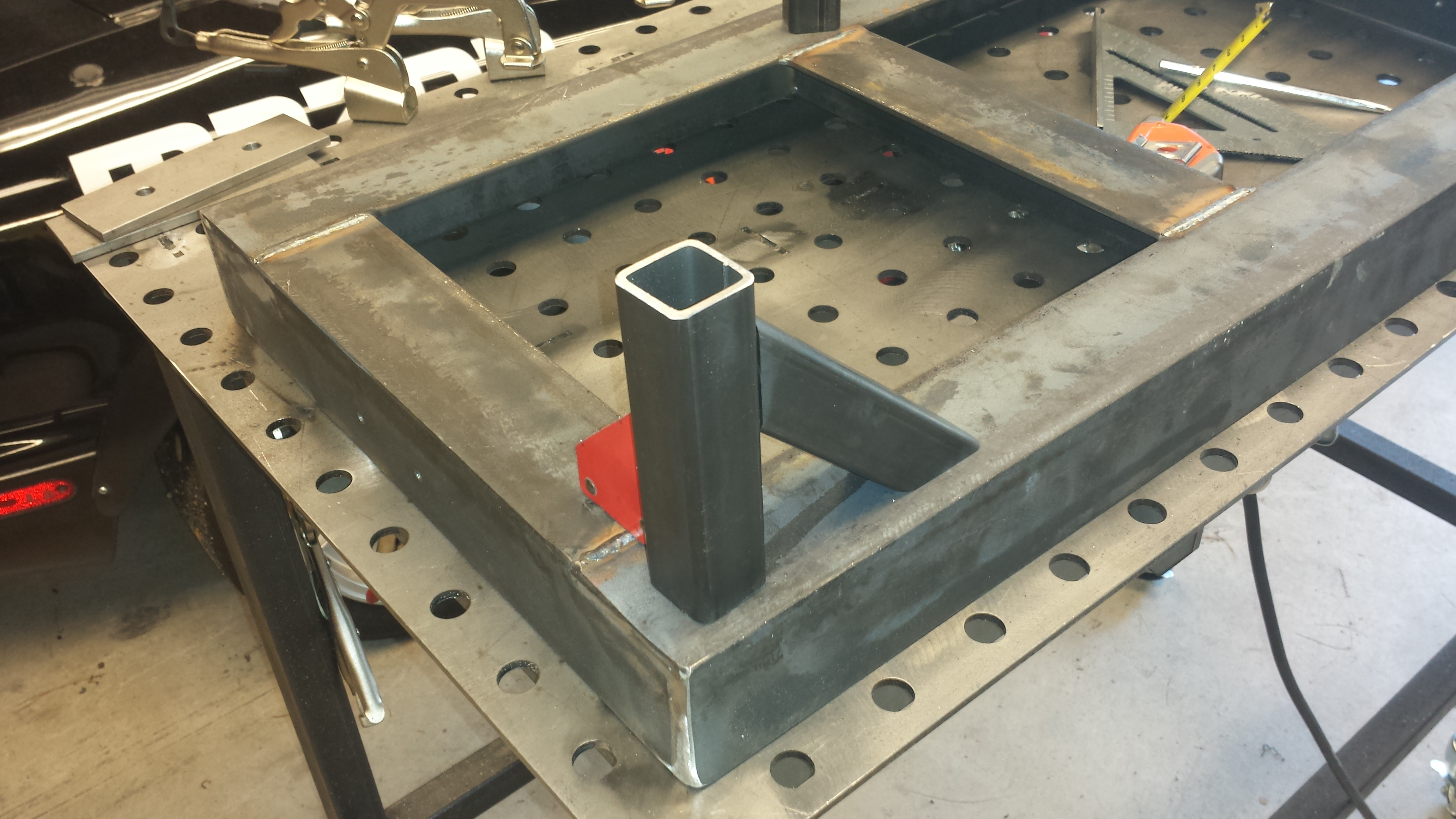 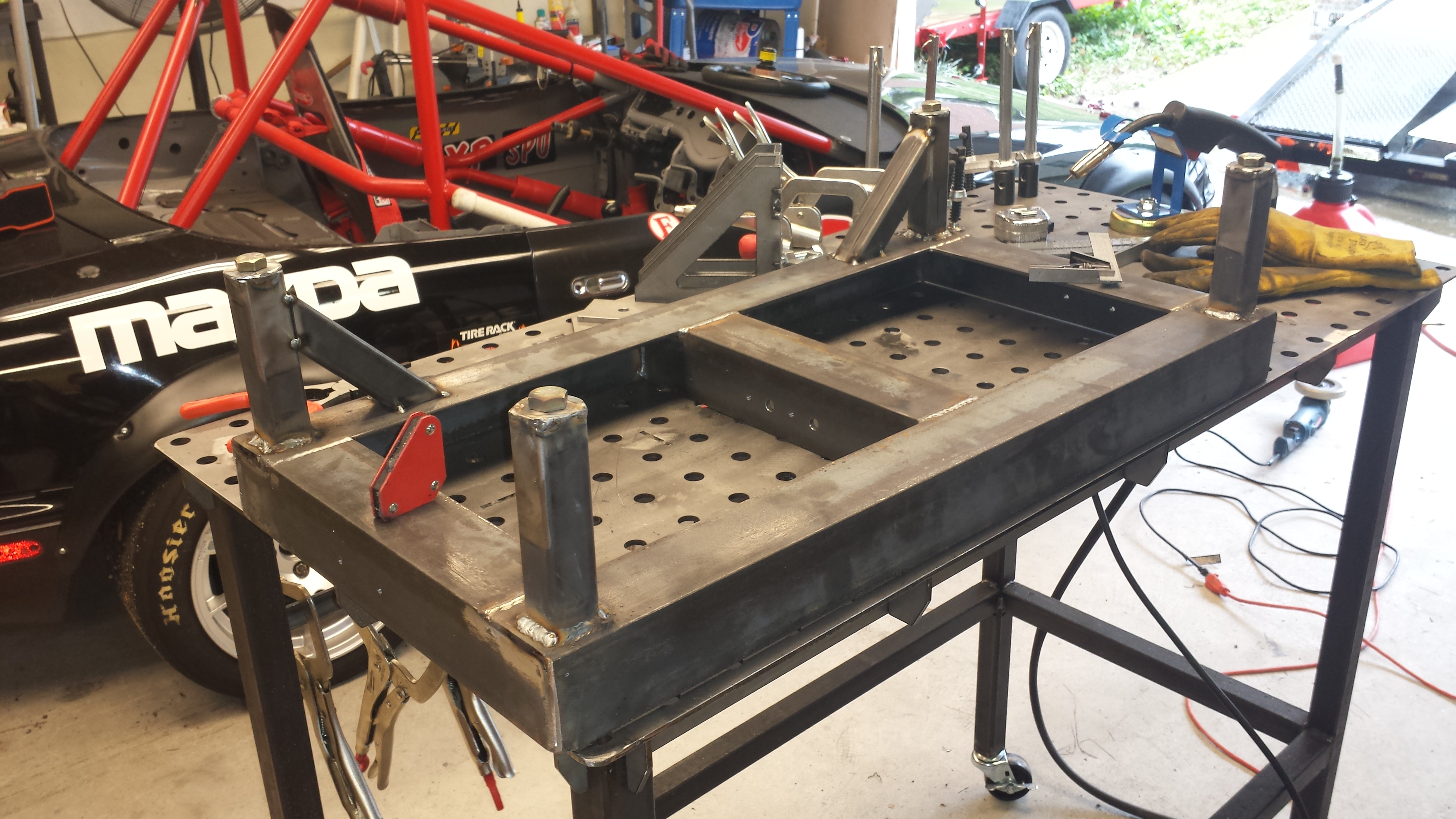 Got the rest of the gussets and the horizontal supports done. 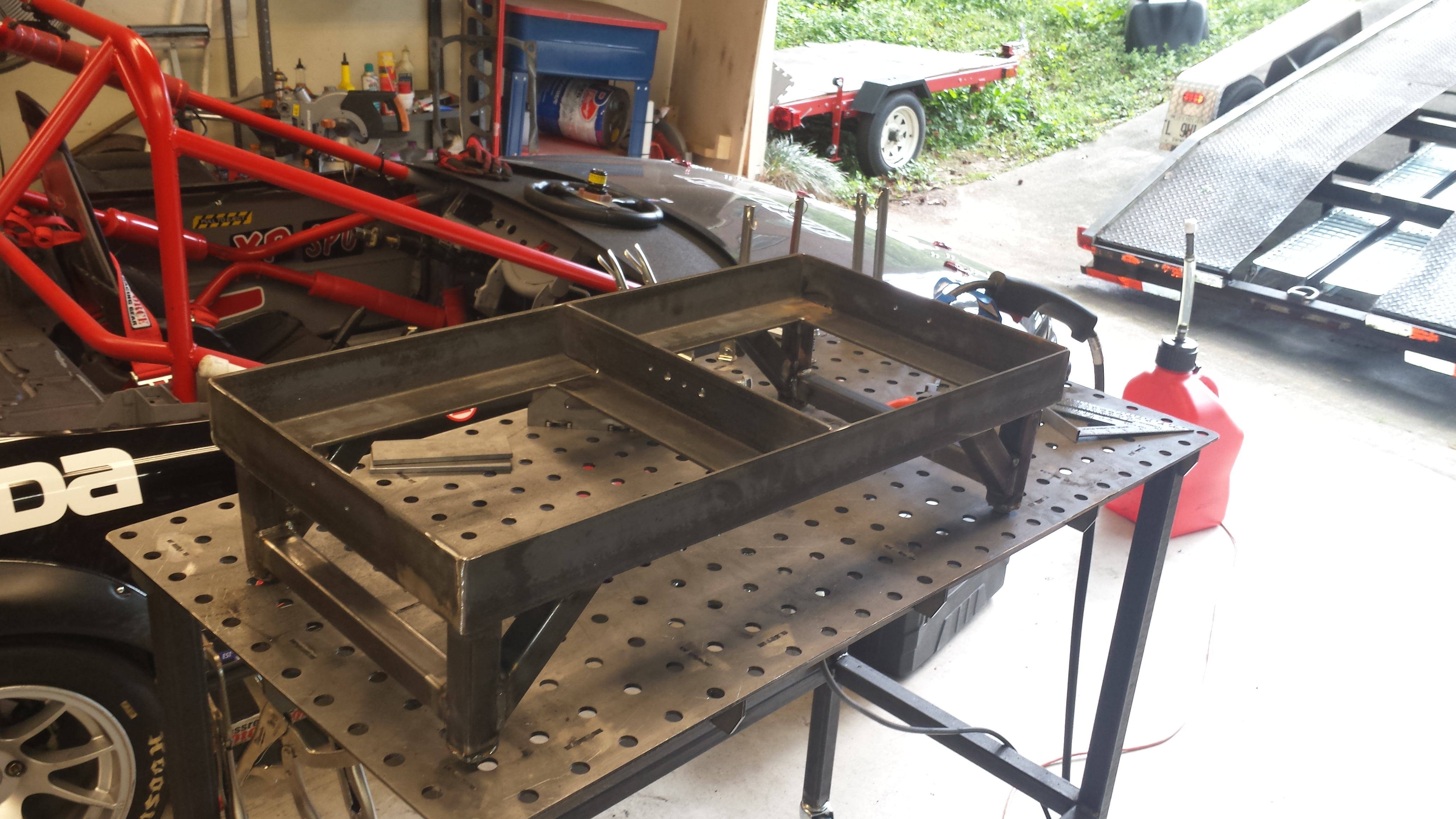 A design requirement was to have feet at each corner that will allow the full set to be leveled. The first step of that are these that make the bottom of the legs, with the threaded nut inside the leg. So, weld the nut to the washer, then weld that assembly to the leg. 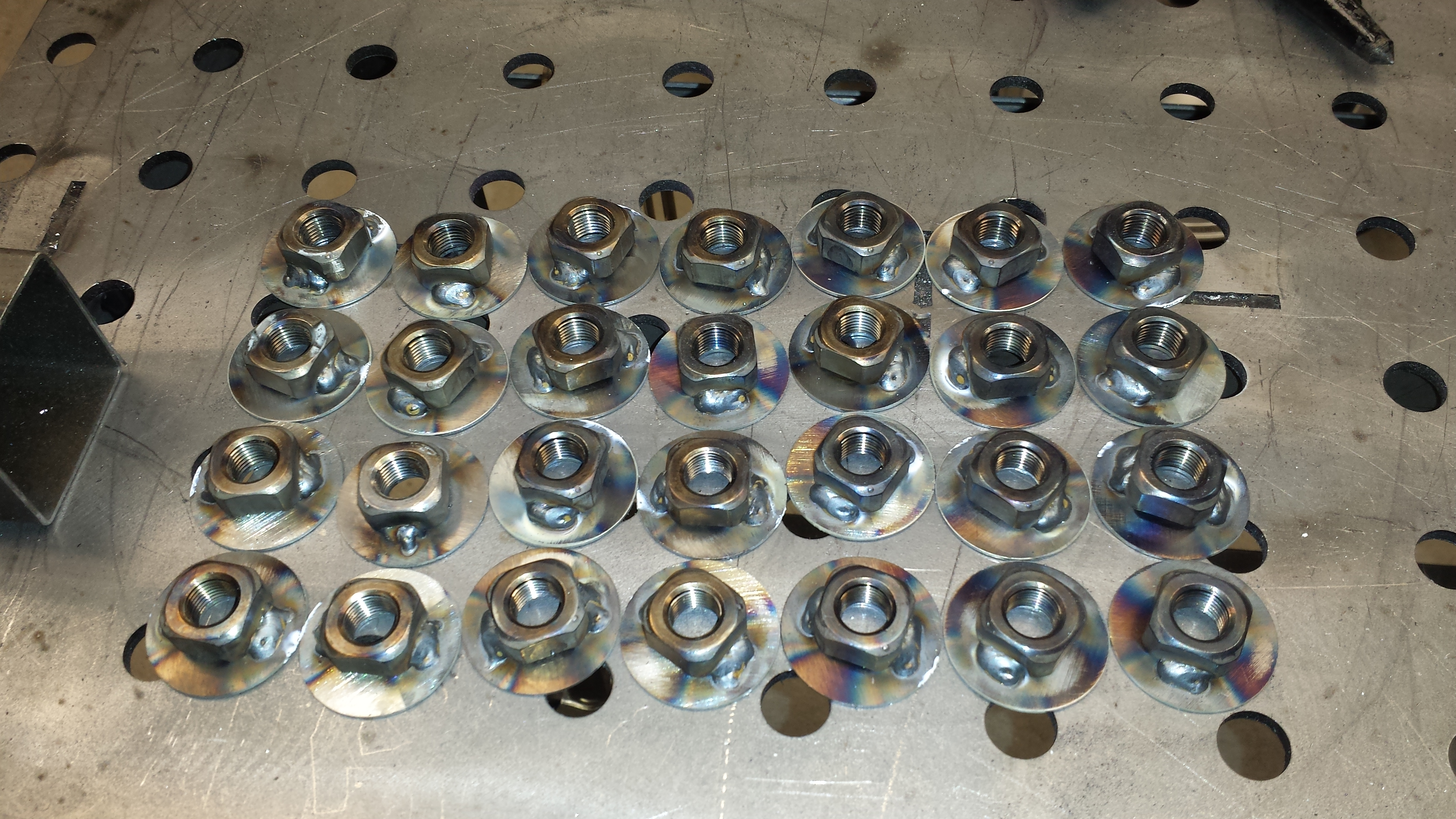 The rest of the parts stackup. 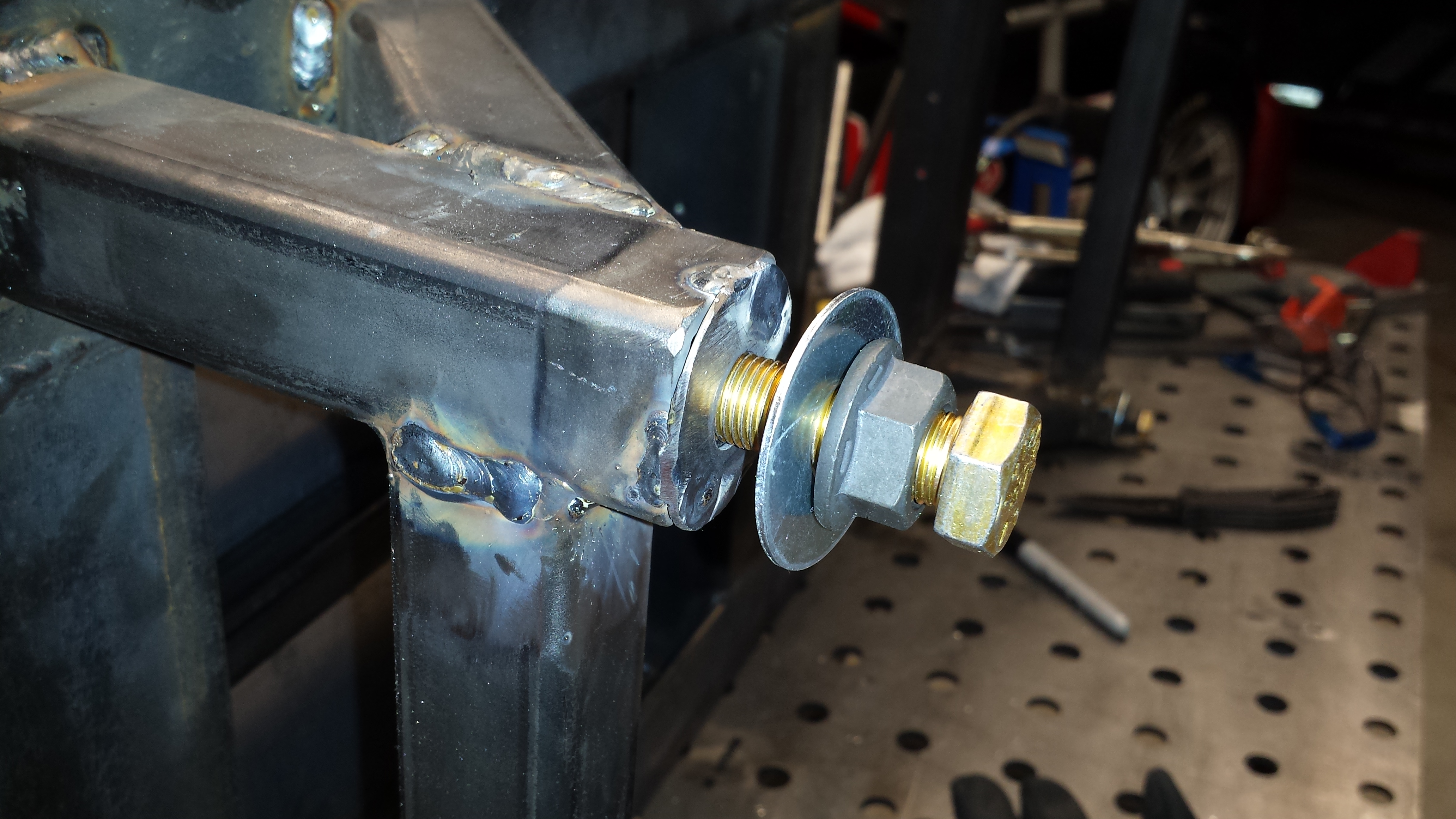 This once again goes into the strength of the thing. Once the jam nut is tightened up, all of the load is on the big washers at the bottom of the legs and the bolt, and virtually none of the operating load is on the tack welds securing the nut on the inside of the legs. 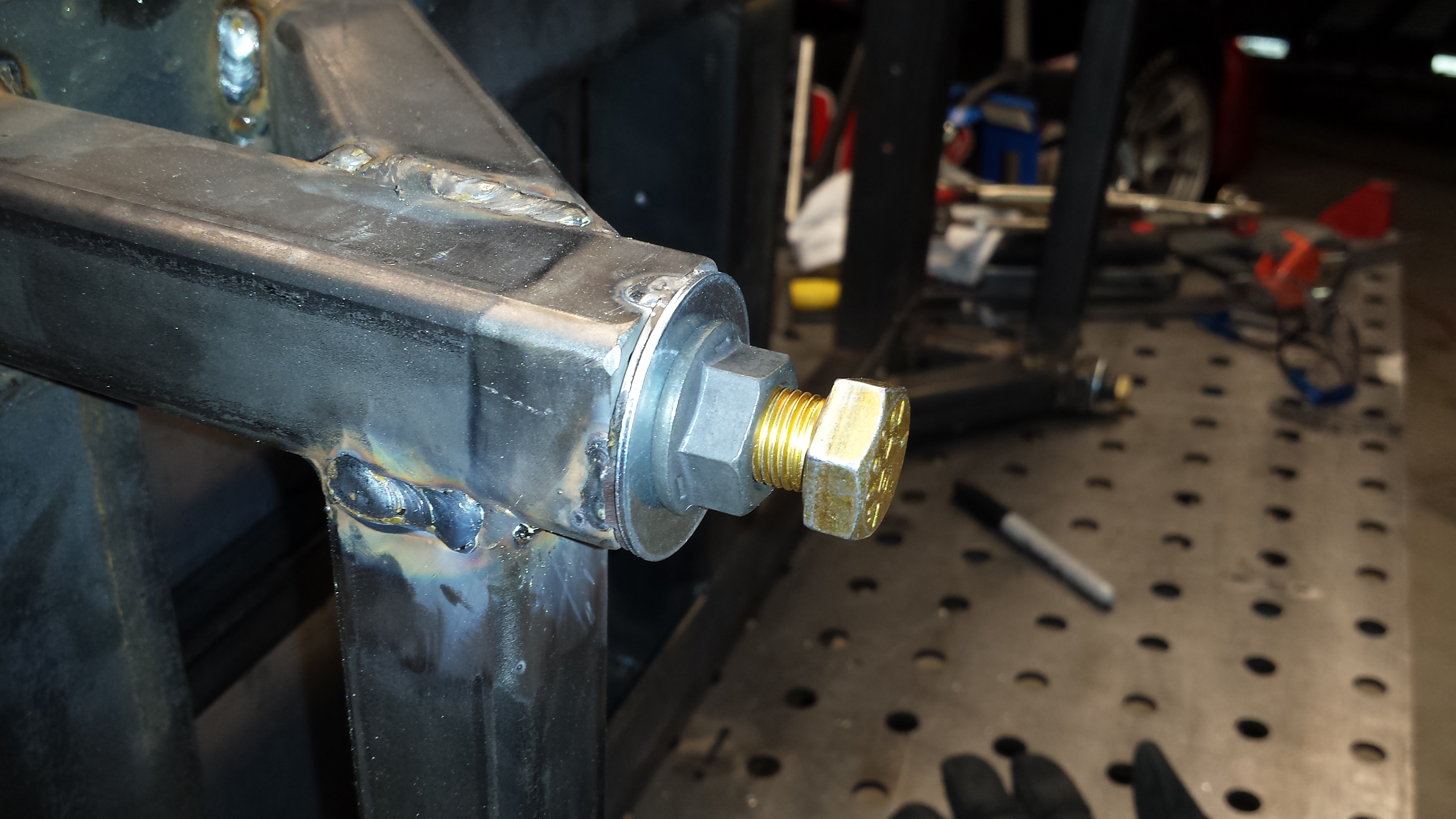 With the basic design roughed out, we’ll work on the roll off pads in Part 2.