I know, I know. It’s not a Miata build, but it is Miata adjacent. I’ve already got some parts I’m looking to turned on it for my car. And it’s an interesting process, so I figured some of y’all might be interested.

I’ve been shopping for a small lathe for the shop for some time now, but kinda had a deal fall in my lap for a used, neglected, Emco 8×20 lathe. A buddy had bought it at a “used tool” auction at his work many years ago, then had a kid (and inherited his grandfather’s lathe that also needs work), so this one was just collecting dust. 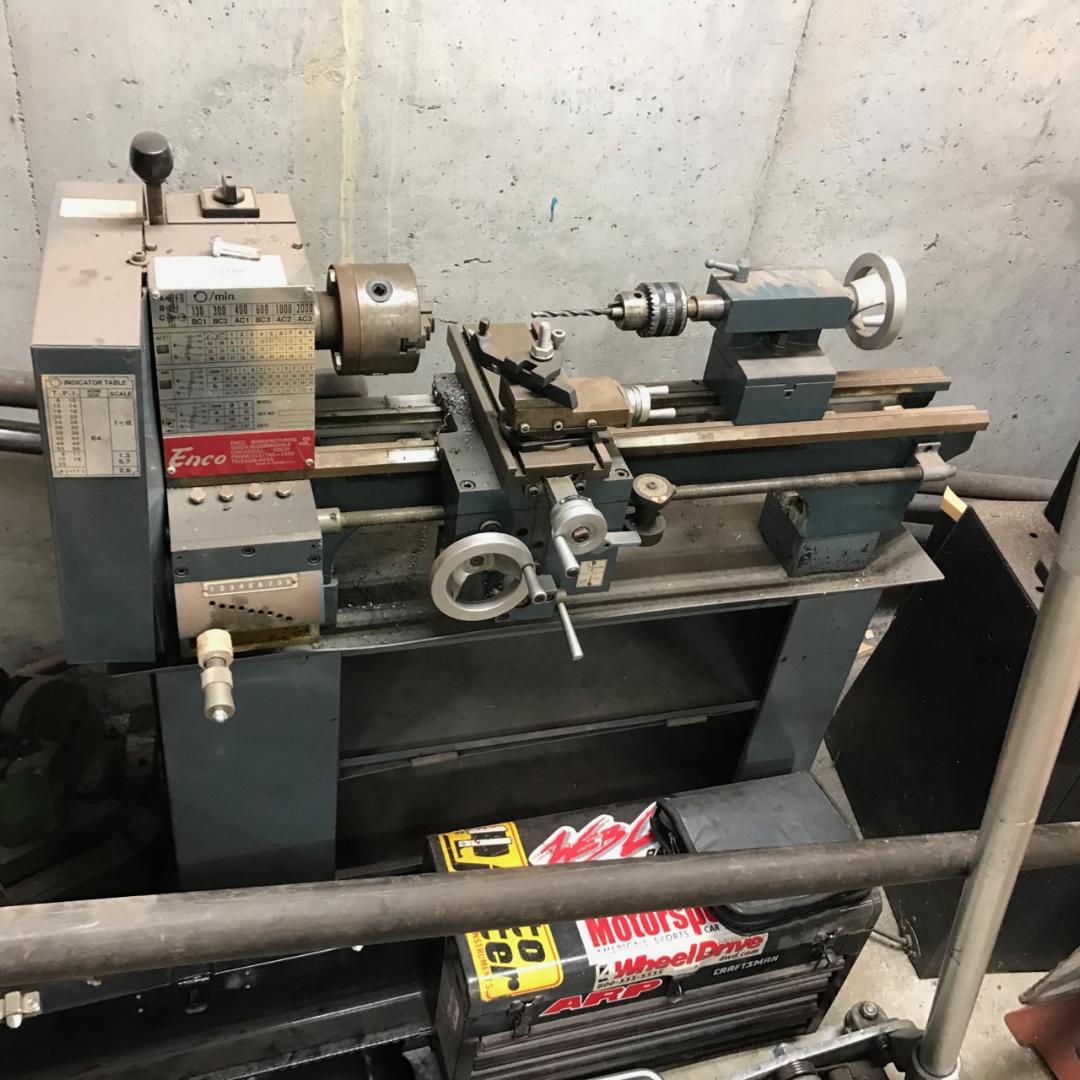 Only a moderate sketch factor with the rigging, but I stopped a couple times in the first few miles to cinch the straps down as it settled in place (and secure the rear door that had swung open), and it was fine the rest of the way back home. 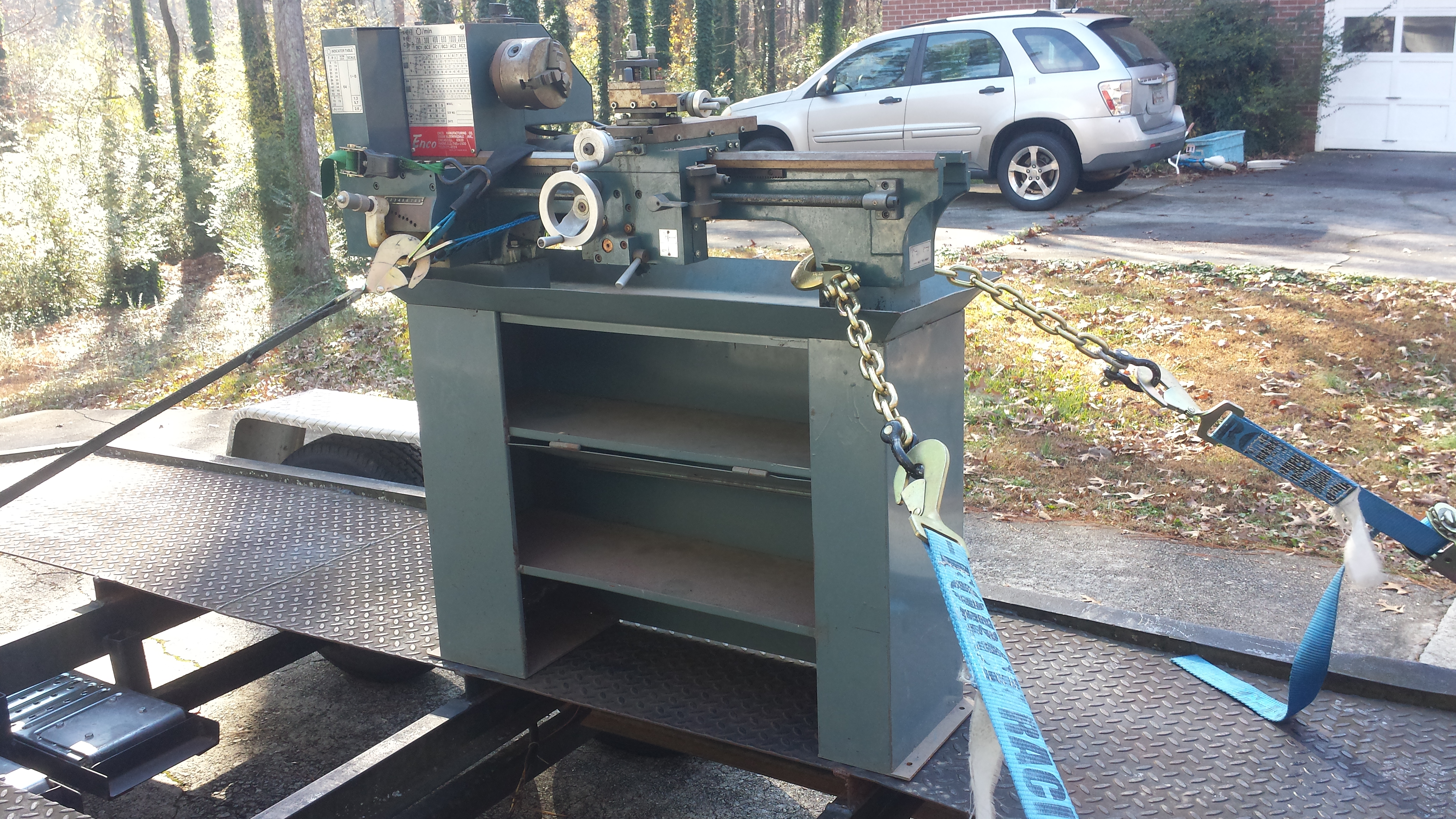 And just for fun, I turned Baby’s First Chip just to say I had before the teardown started. Because boy did it need to be gone through. 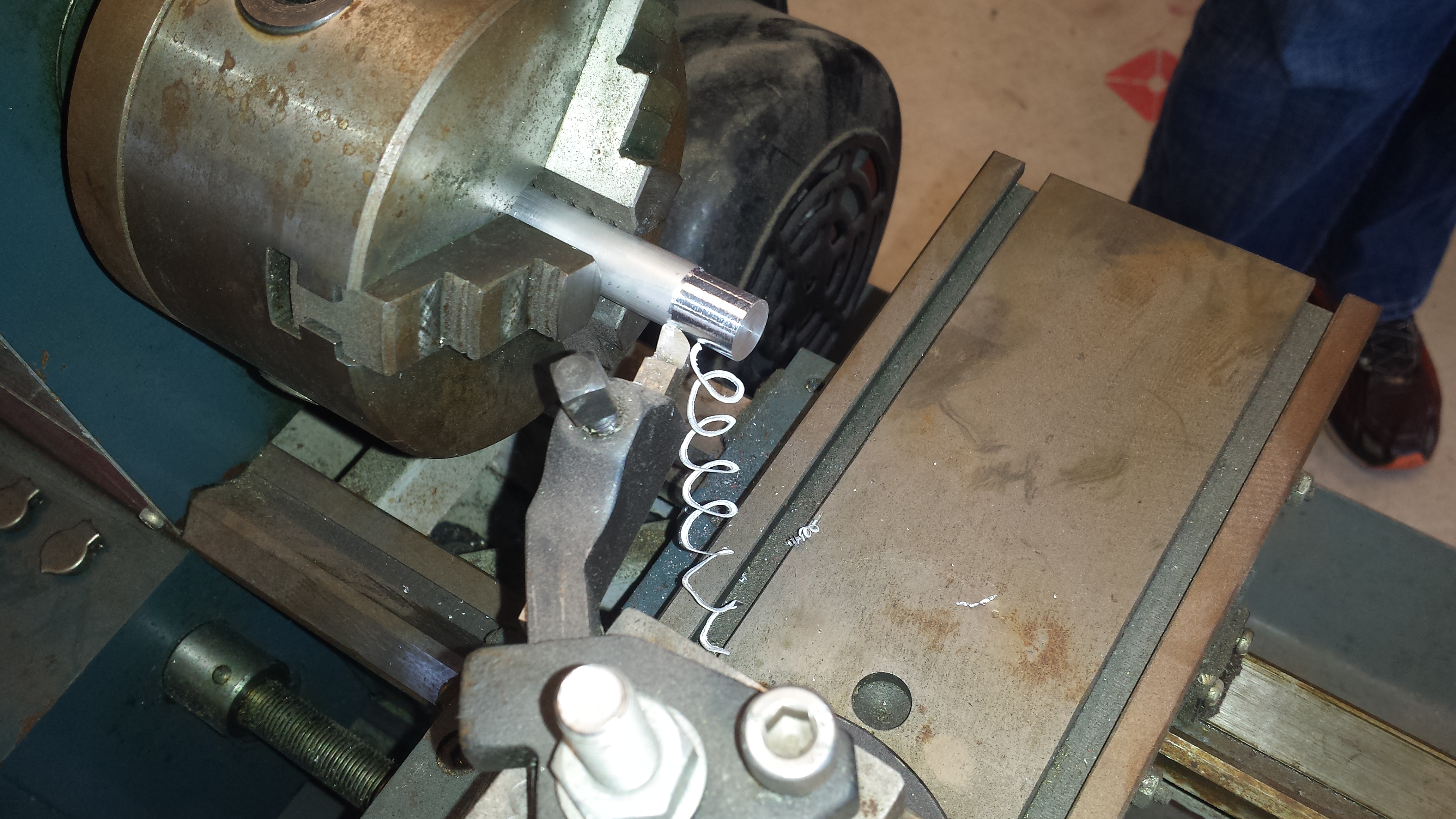 With a little help from a couple friends, we got it down to my workshop. If you’ve ever seen where my shop is, you know how sketchy THAT was. I backed the trailer down the hill, then used the winch to slowly slide it off the trailer and into the workshop, with someone on each side to steer.

One of the first things I noticed (and was pretty worried by) was the runout on the chuck. Hopefully the entire headstock won’t need to be rebuilt, because I found the most likely culprit: a bunch of swarf built up between the back of the chuck and the lathe’s face plate. Hopefully tidying this up will improve that situation, or else I’m going to have to figure out what’s crooked in the system. The nice thing is that the lathe can be used to true itself up if need be. 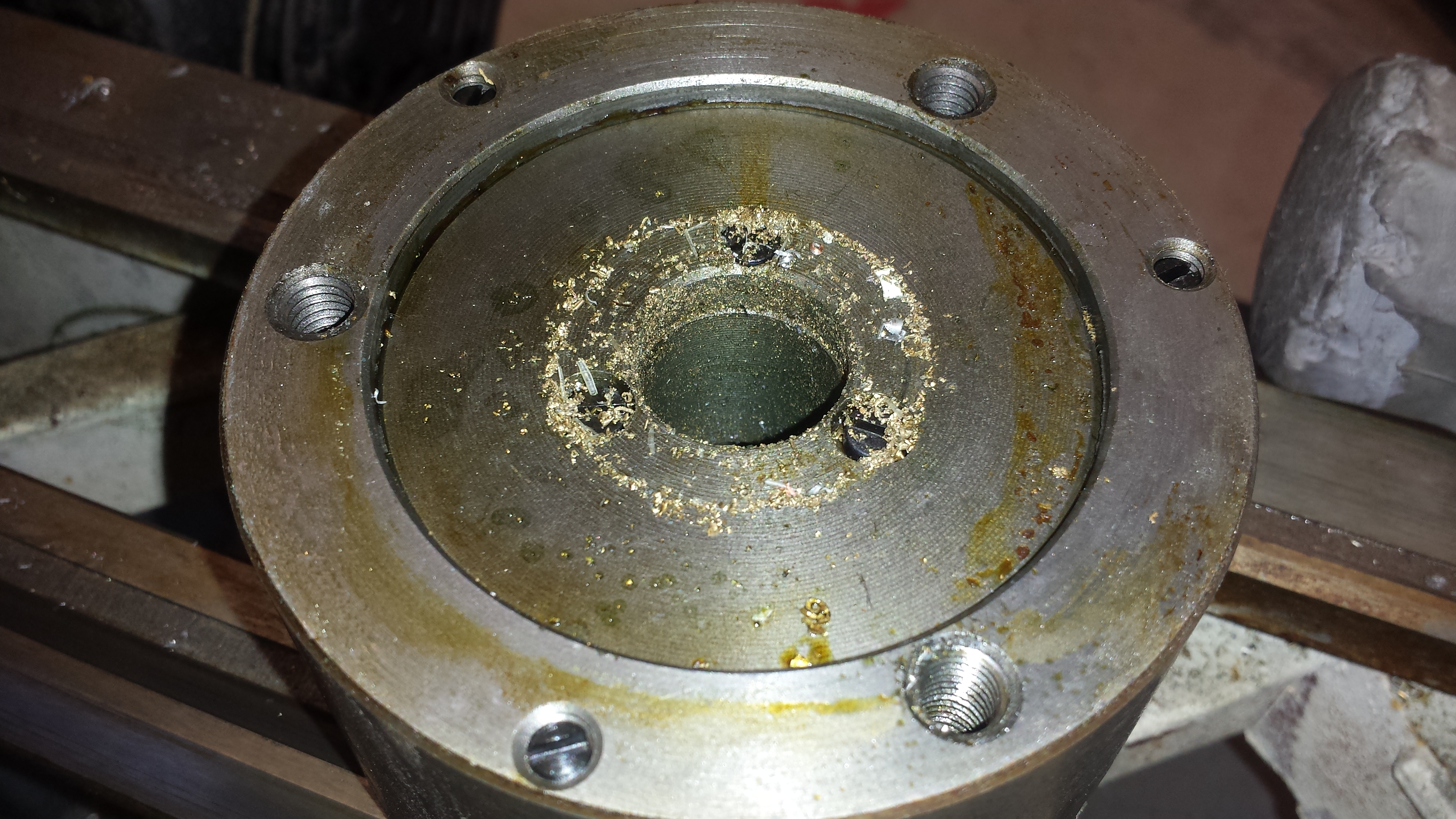 Next up was the sticky lever in the quick-change gear box for the power feed for the compound. Apparently they’ve been using grease in this thing instead of machine oil. This…will become a running theme. I let it soak in simple green then oiled it while the machine ran for a few minutes and that freed the lever up to move freely side to side. The lead screw will need to be taken off and THOROUGHLY cleaned, however, as it is caked in fine chips. This too will become a running theme. 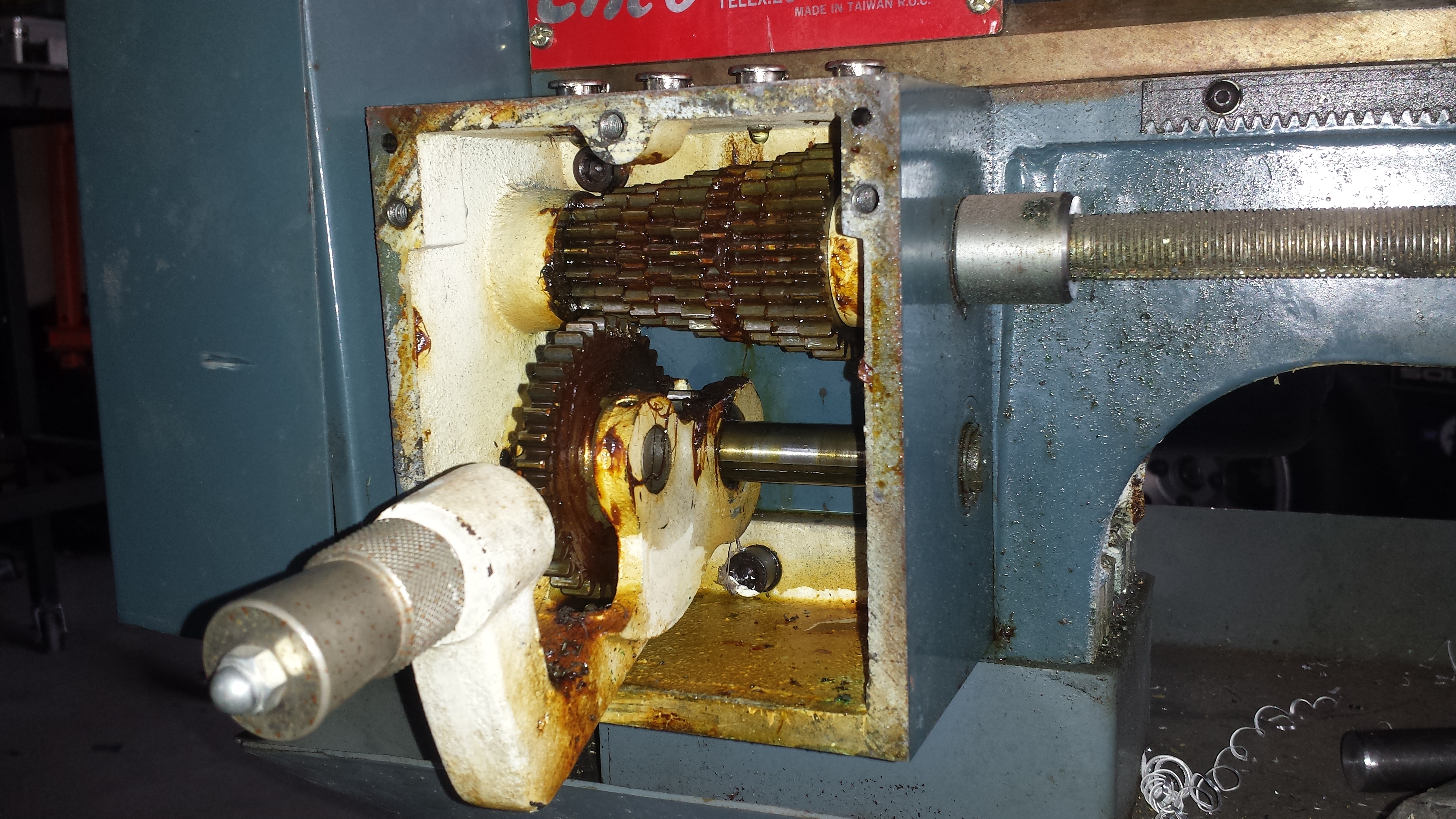 My next biggest problem is both the free play and stiction in the cross slide. The free play can be tuned out by adjusting the gibs and the tension on the nut that the adjustment screw rides in, but a lot of the stiction is from old, crusty grease. So, the entire compound / cross slide / top slide and apron are going to come apart to be thoroughly cleaned up. I’m not going for “car show” levels of cleanliness, but I want it to run well even if it’s not the most beautiful belle at the ball. Once again, a ton of crud under the tool post. I actually couldn’t find the witness mark for setting the tool post angle because it was caked in dirt and oil. It should turn much more freely now. 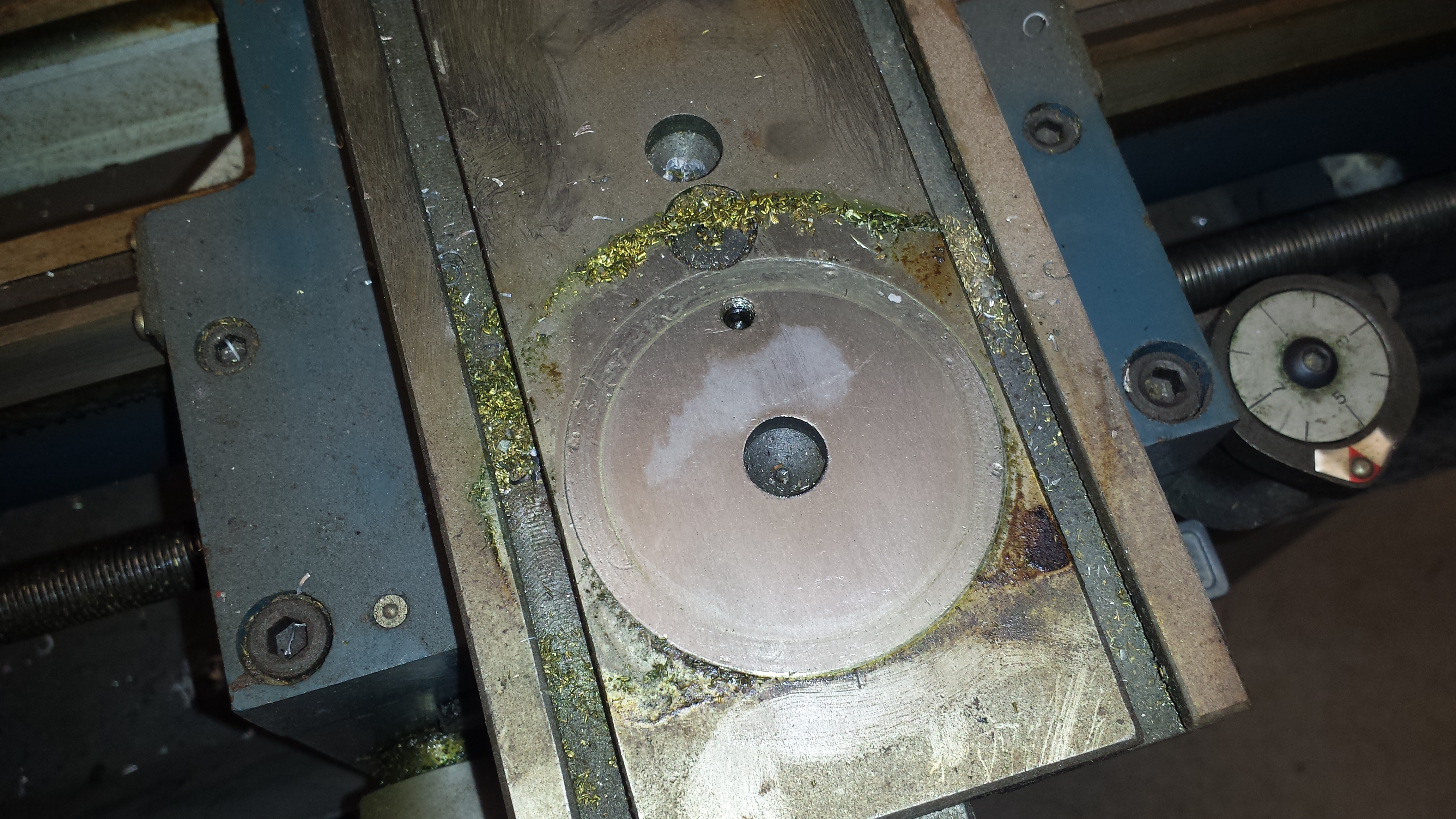 Got the cross slide wheel & screw out. Again, CAKED on grease everywhere I turn (unintentional lathe joke!). To be clear, this isn’t grease as you think of it, just heavily applied. This is stuff that’s been on there for 20 years, dried up and left a thick coating of dry crap that has to be scraped off by a fine pick in many instances. 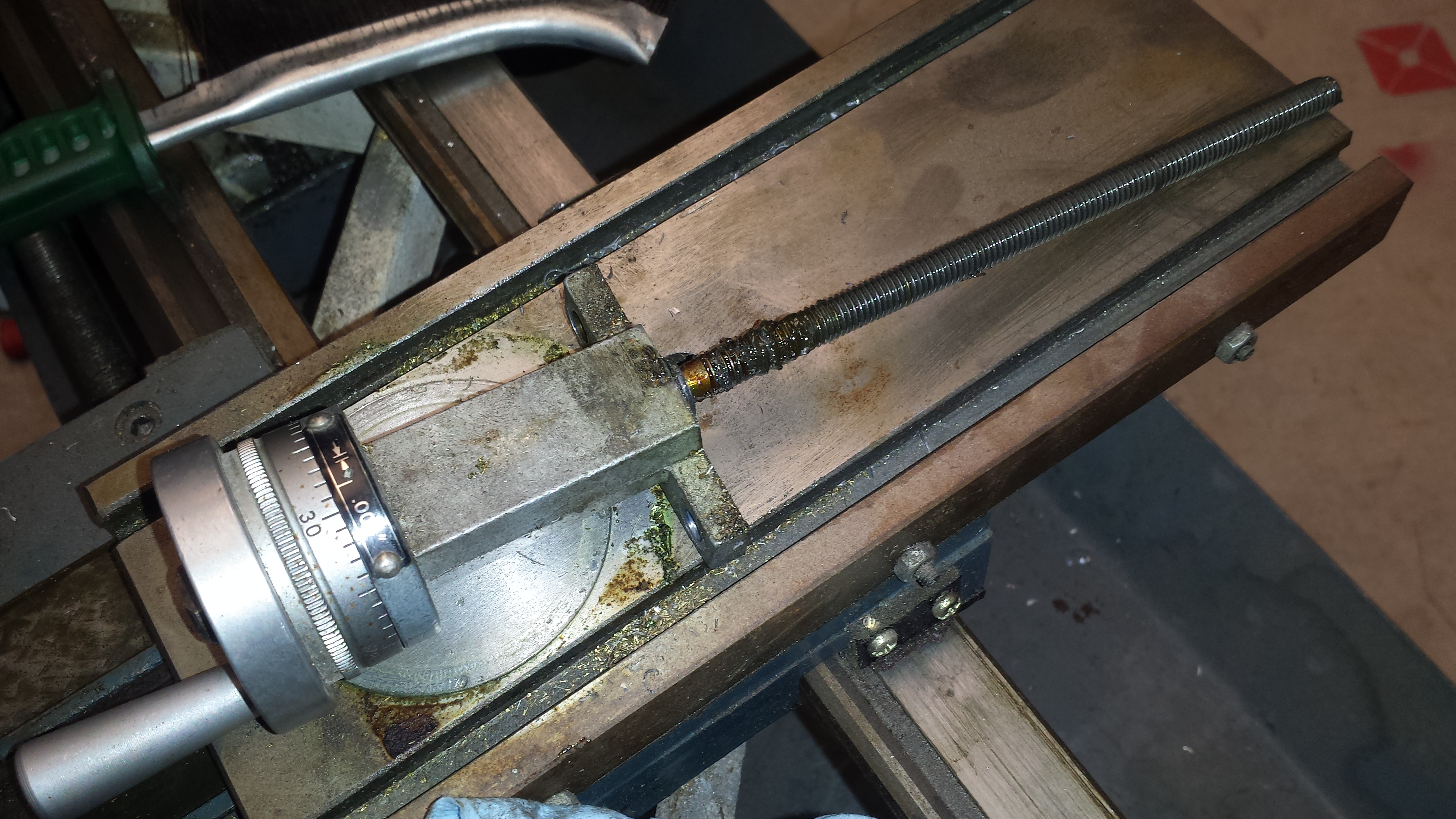 And finally, the compound comes off the ways. This is the bottom of the compound, where it would slide on the lathe bed. As you can see, some surface rust (not anywhere it actually touches the lathe ways, thankfully), and a lot of old oil & dust and grit that will need to be cleaned off. 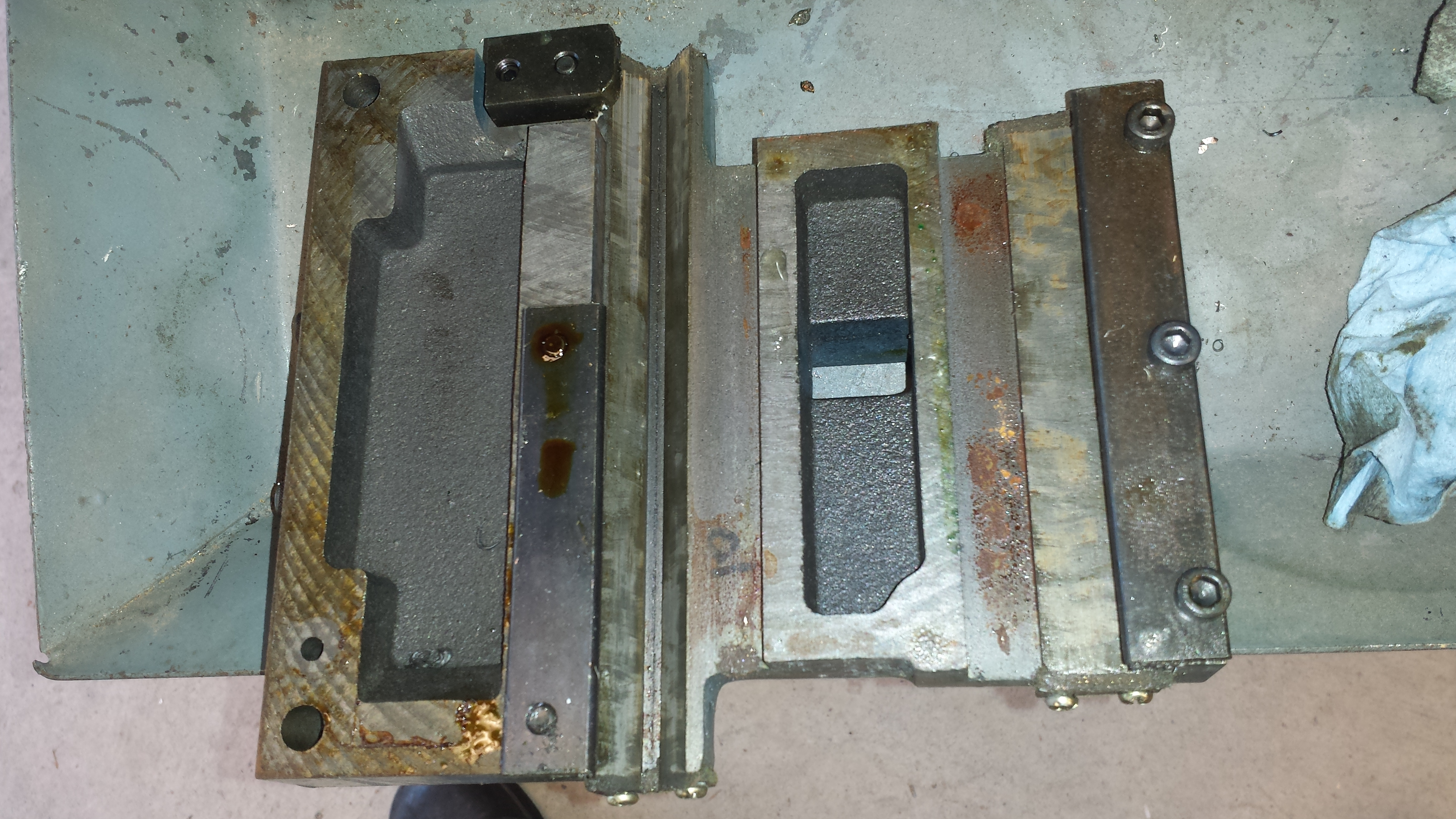 With the compound, apron and lead screw off, she’s now pretty stark naked. 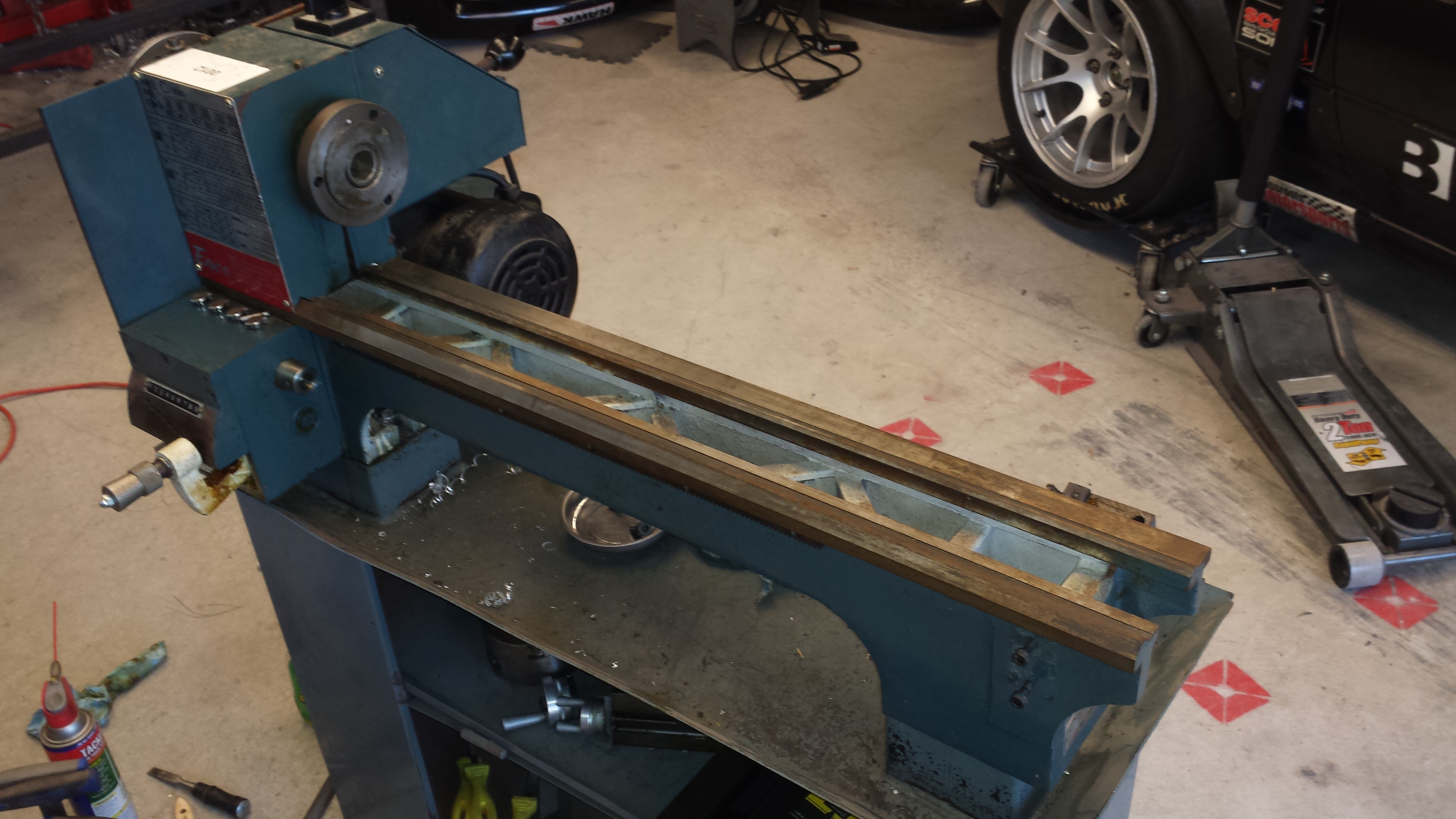 Up next was to work on the apron (ie: the gearset that uses the lead screw to run the power feed for the compound, and rides under the compound). This is what greeted me when I took it off. Take a moment to click the picture and zoom in on just how bad it is. The amount of crud caked in the threading half-nuts, the caked on grease (more…). After I’d run it for a while, the handle for the power feed was jammed on and couldn’t be disengaged because of what ended up being a chunk of dried grease getting caught in its working. It was bad. 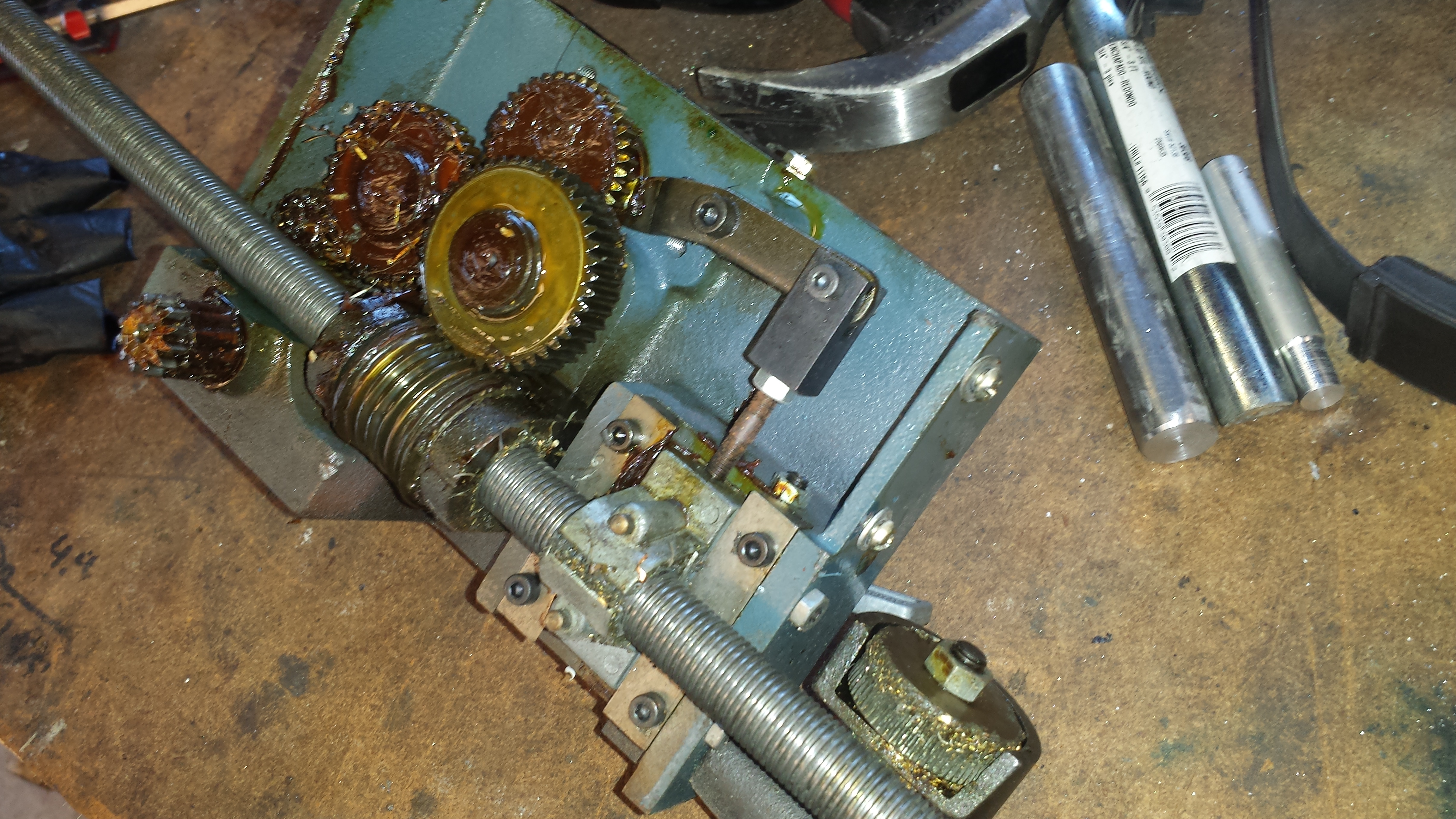 A bath in the parts washer made almost no difference in the grease on the gear train there. I ended up to have to disassemble the power feed engagement lever and gear assembly and then go through the entire gear train and the lead screw, tooth by tooth, thread by thread, with a pick to actually get the hardened gunk out of the system. 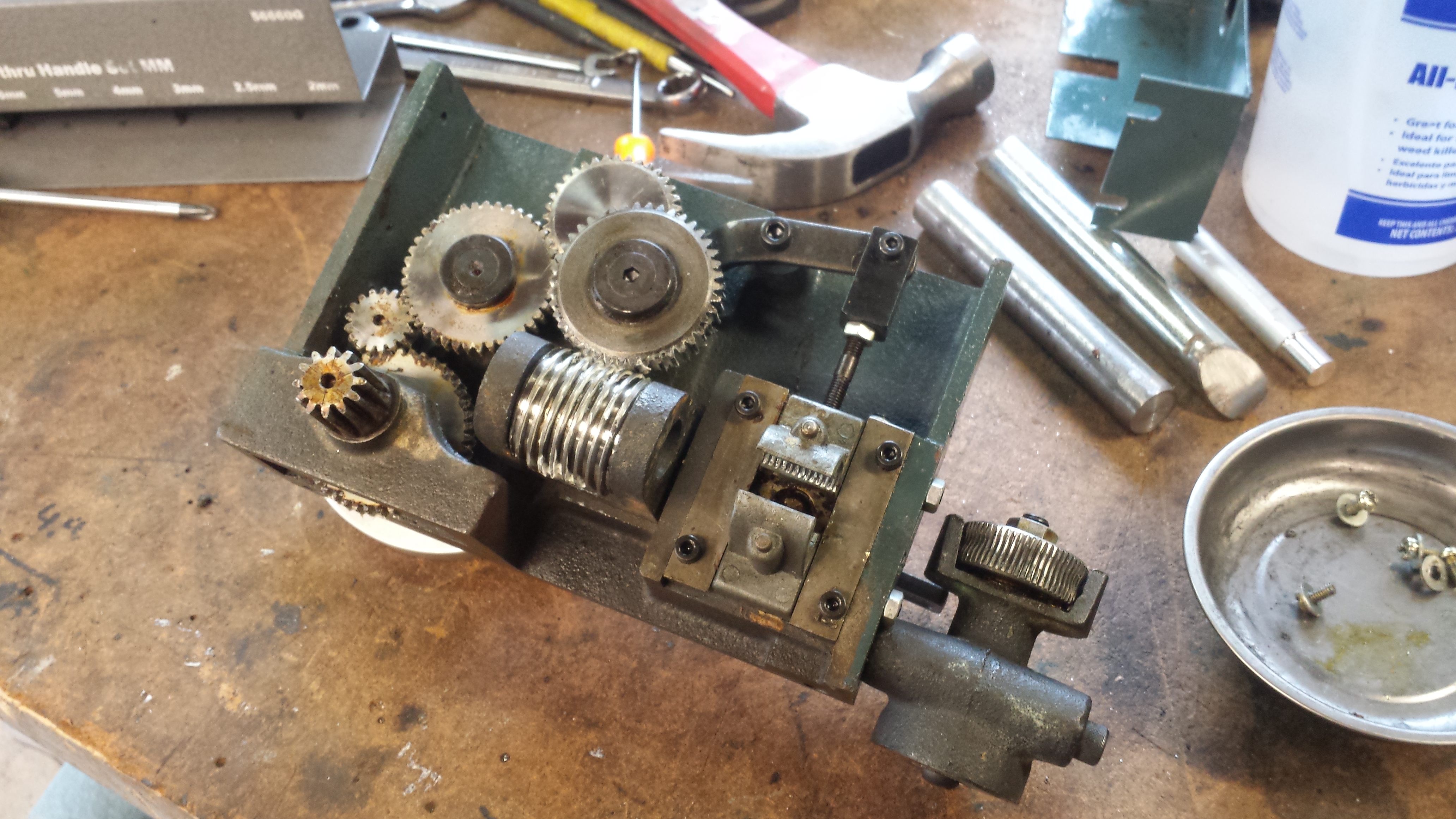 The compound angle was really tough to set earlier. This is what I found between the angle dial that’s pressed onto that arbor, and the tool post. 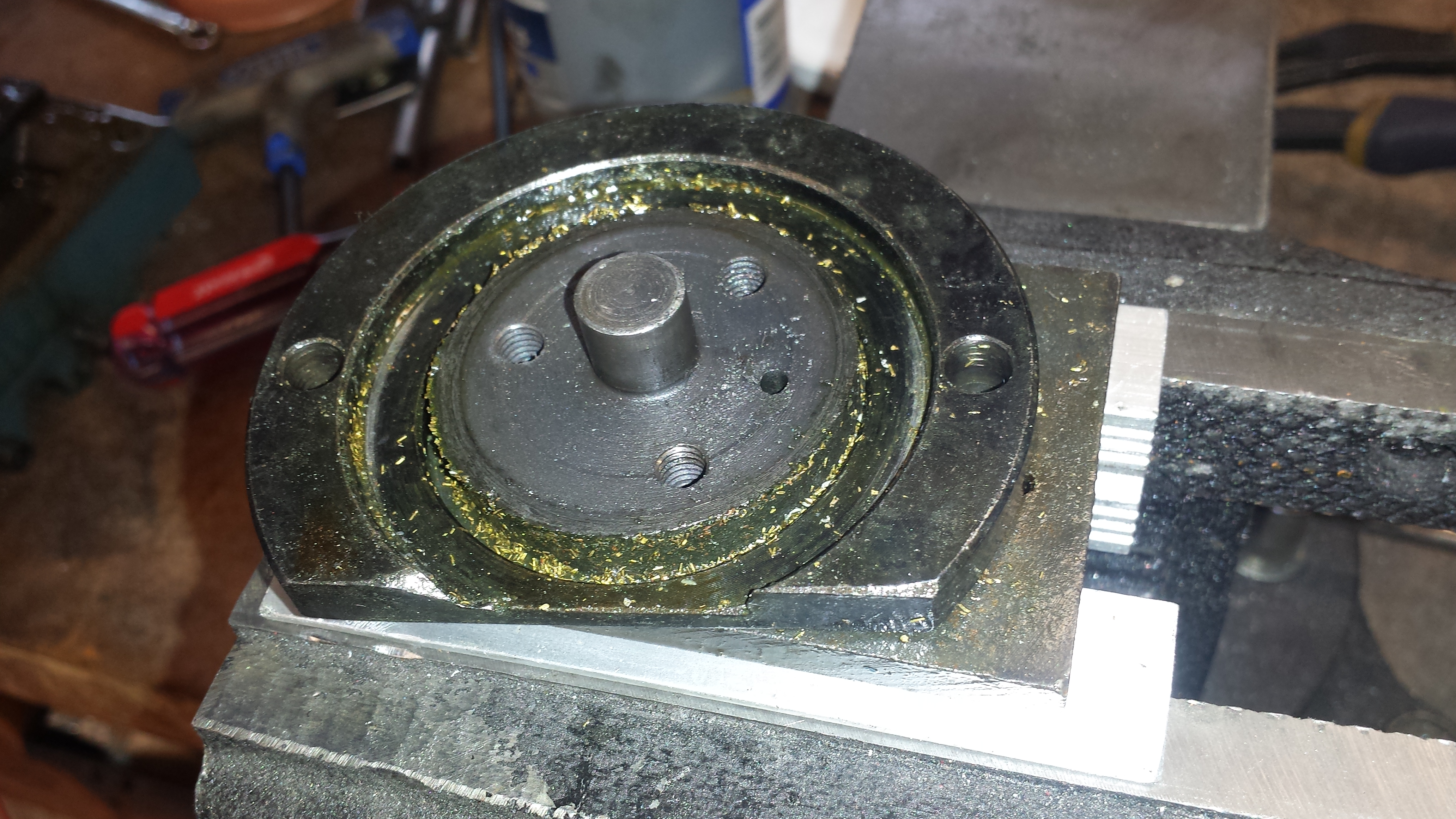 It was a ton of work, but MAN everything turns smoothly now. It’s such a huge difference. I put the barest whiff of white lithium grease on it per the factory service recommendations, and then it’s maintained afterwards with 140W gear oil. 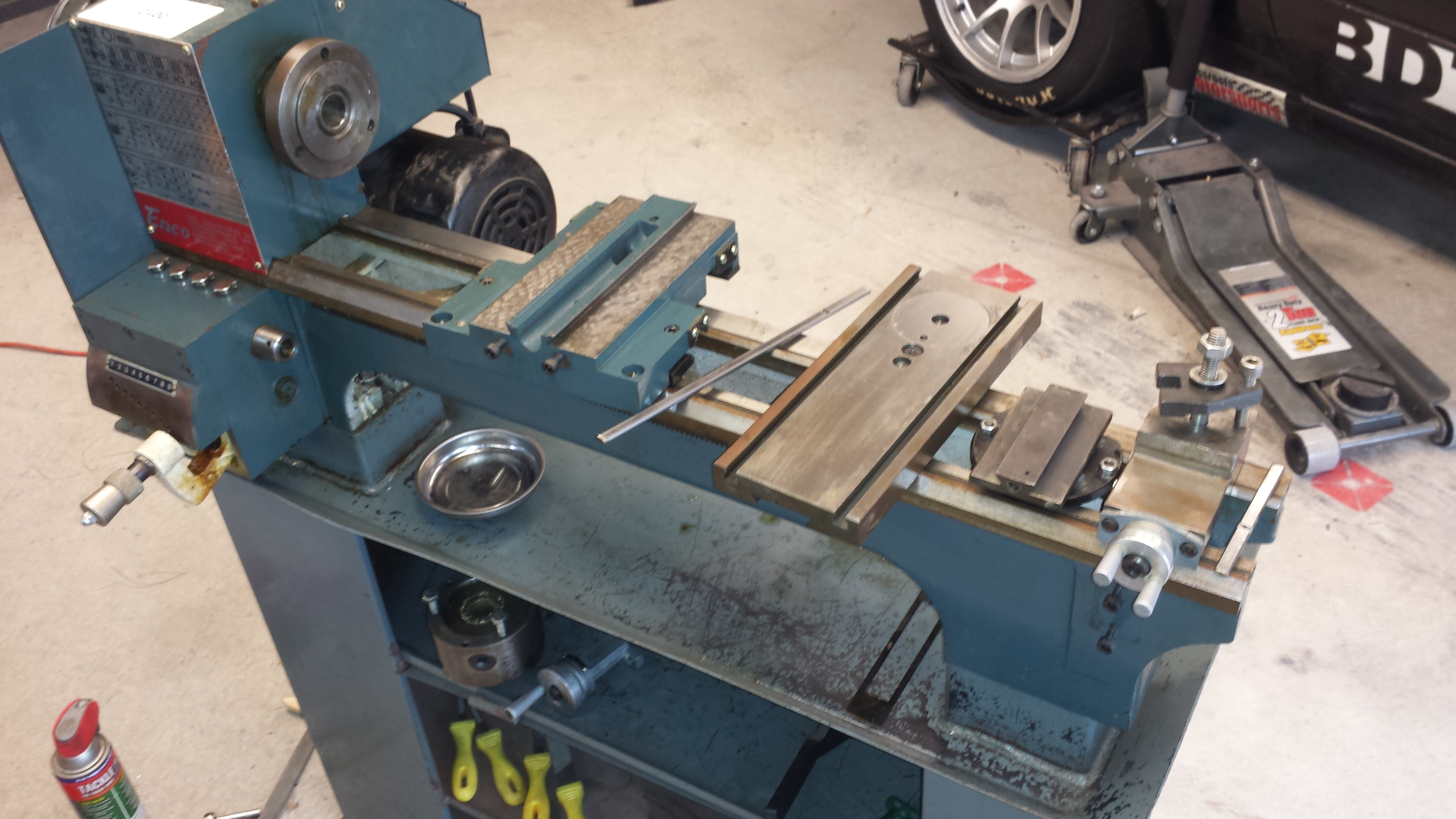 She still needs work, but we’re getting close. I’ve got the final cleaning supplies (specifically, some 0000 steel wool to clean the ways and gibs) coming in the next day or 2, and a handful of replacement parts and upgrades that should be coming next week.