With the rest of the supplies to clean it in hand, it’s time to get back to it.

I really want to show the Before and After in the same shot. 0000 Steel Wool and WD40 (and some elbow grease) did the business on that crud. 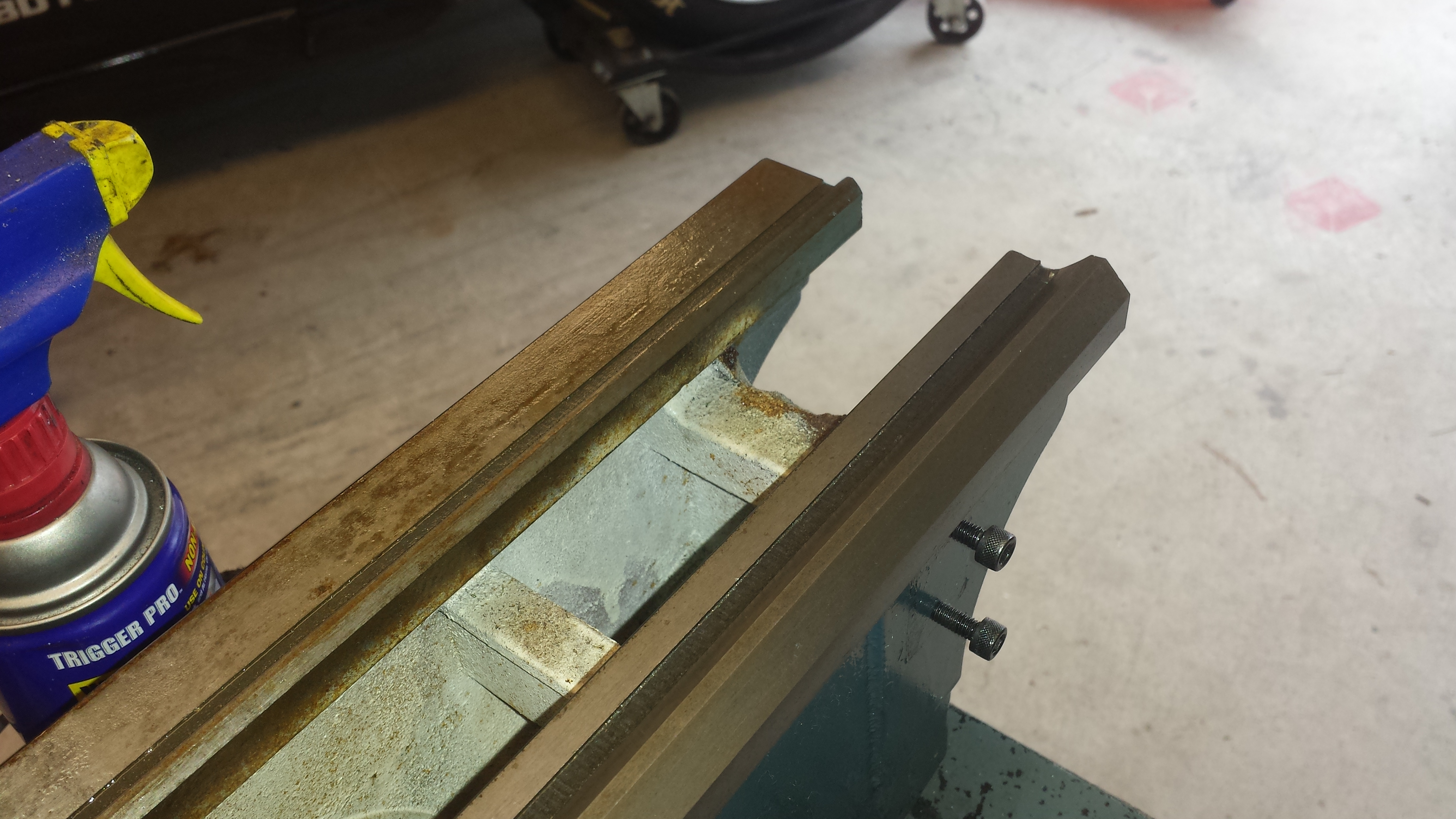 The spindle face got a similar treatment, though it took much less effort. Load up a piece of steel wool with WD40, then turn the motor on and it basically cleans itself. 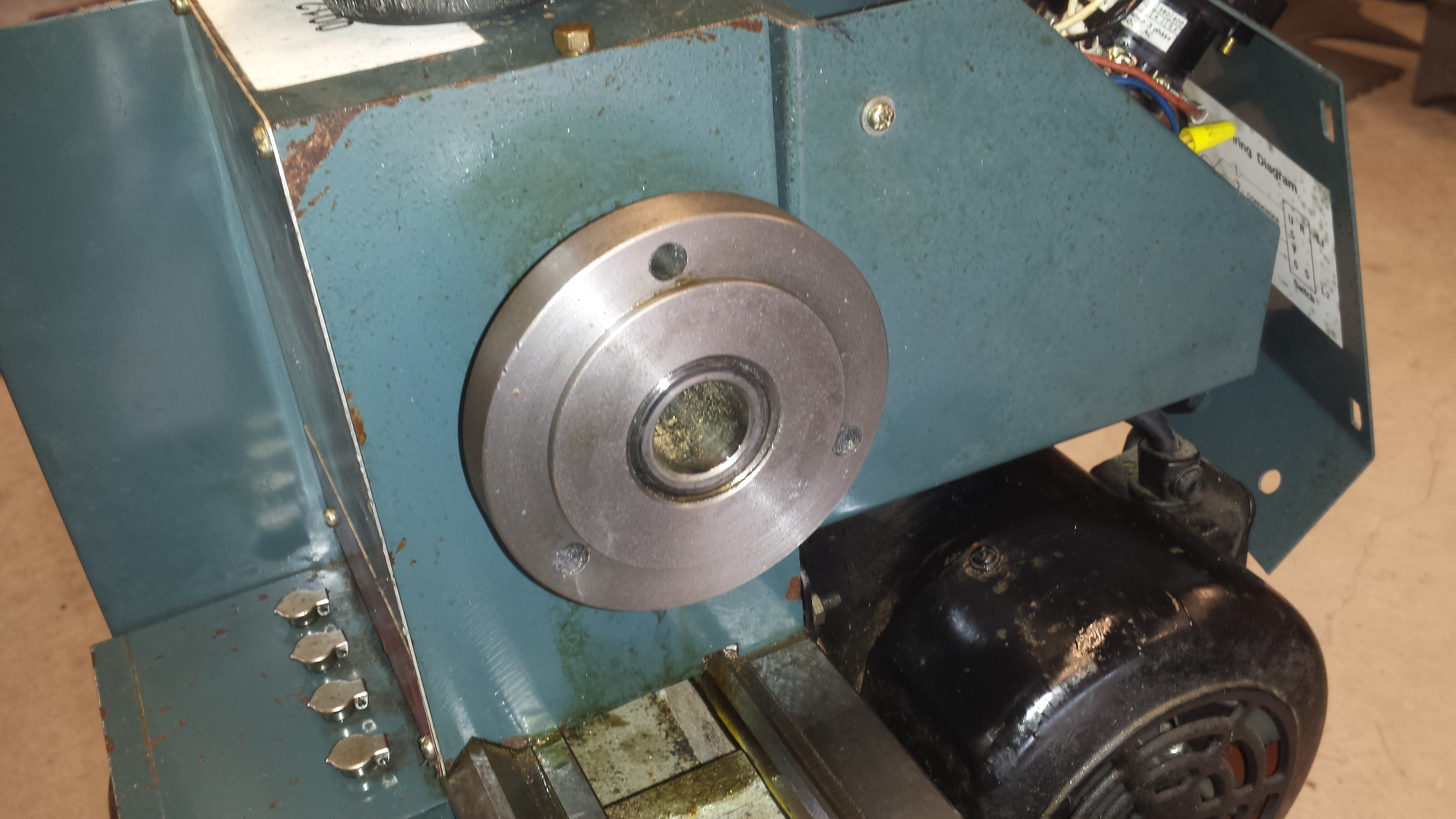 With the big cleanup done, it’s on to the ol’ “install is reverse of removal.” First the carriage goes on… 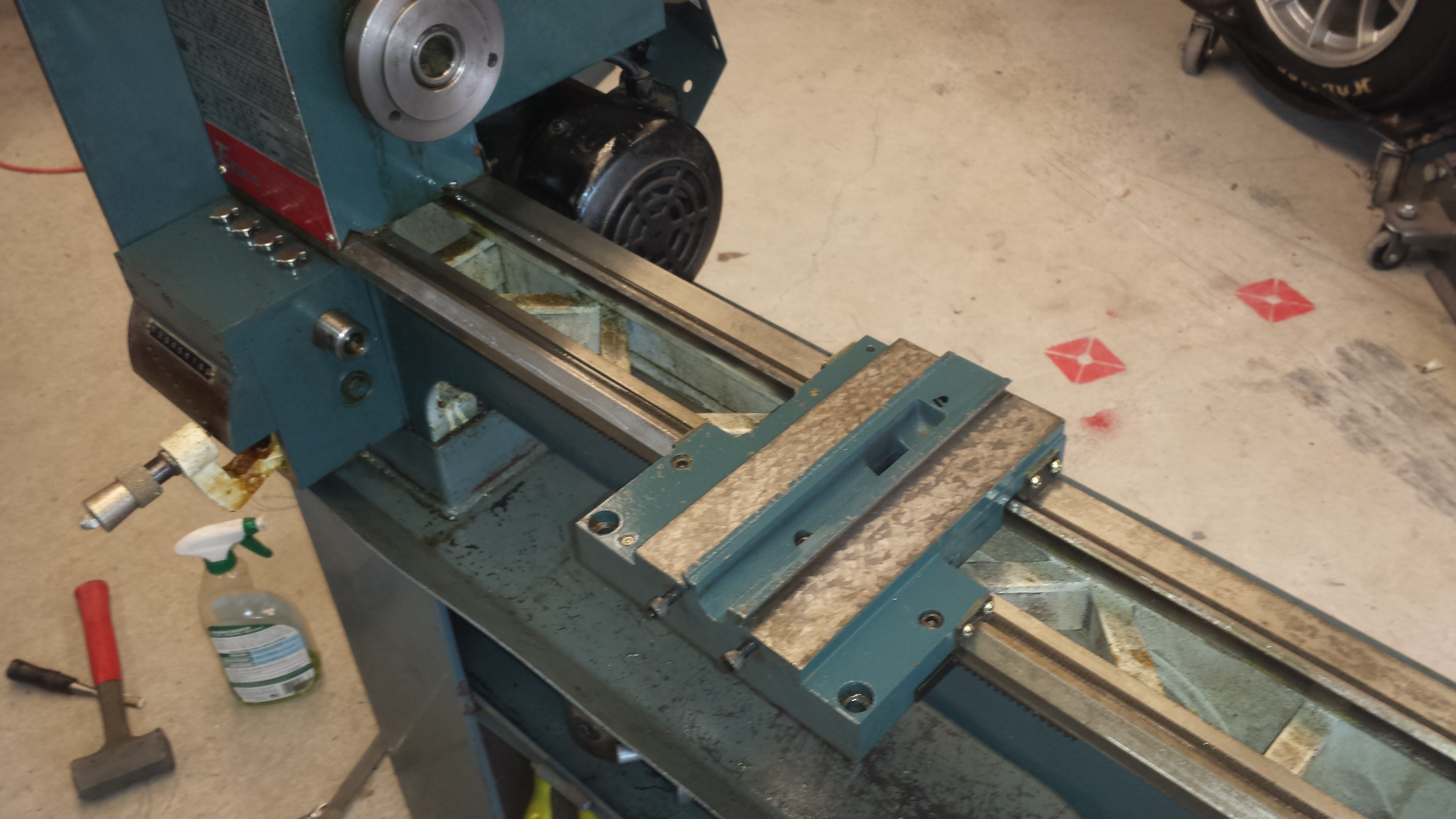 Followed by the apron and lead screw. 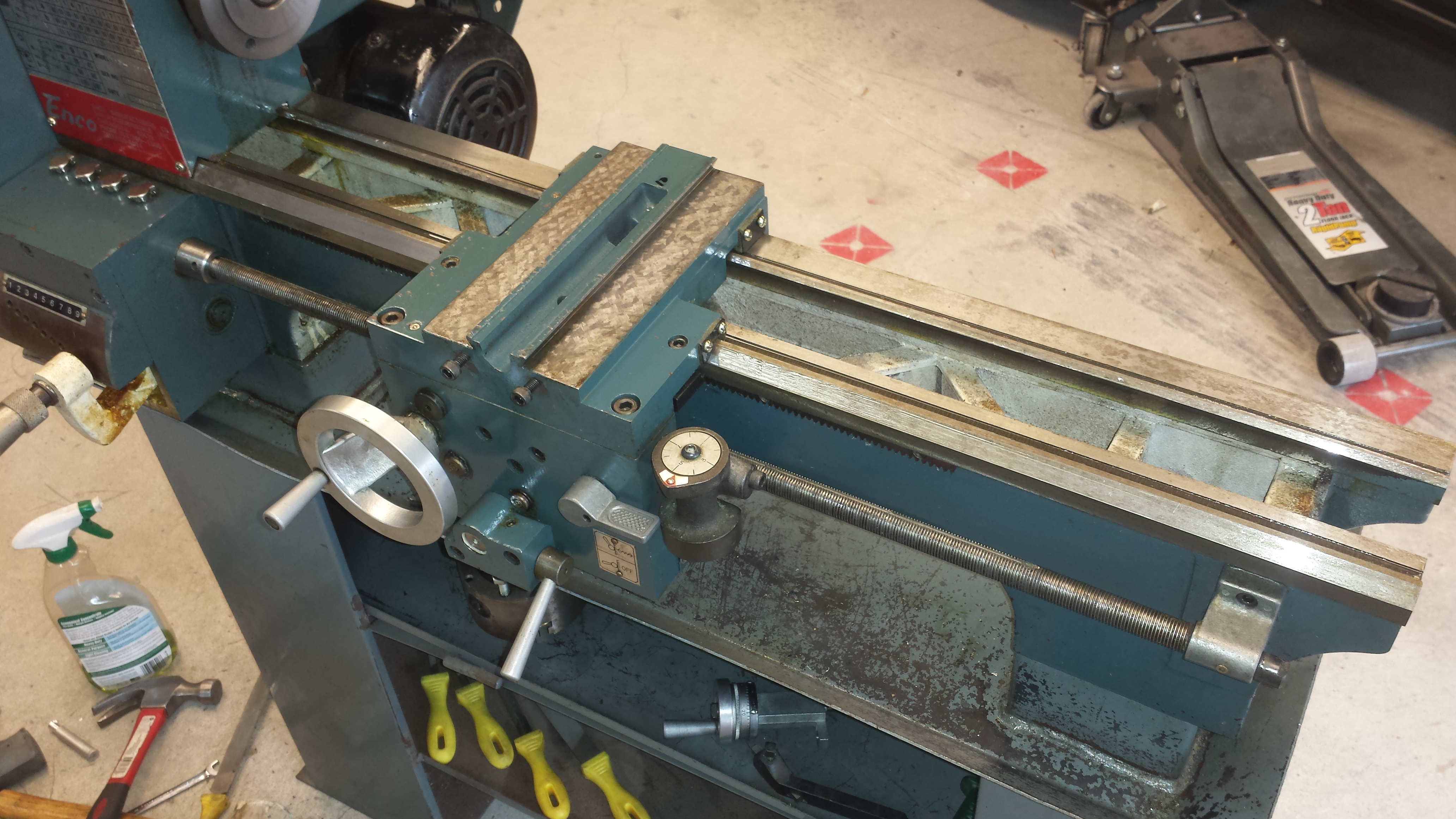 Then the cross-slide, compound and spindle go back on. She cleaned up fairly well if I say so myself! 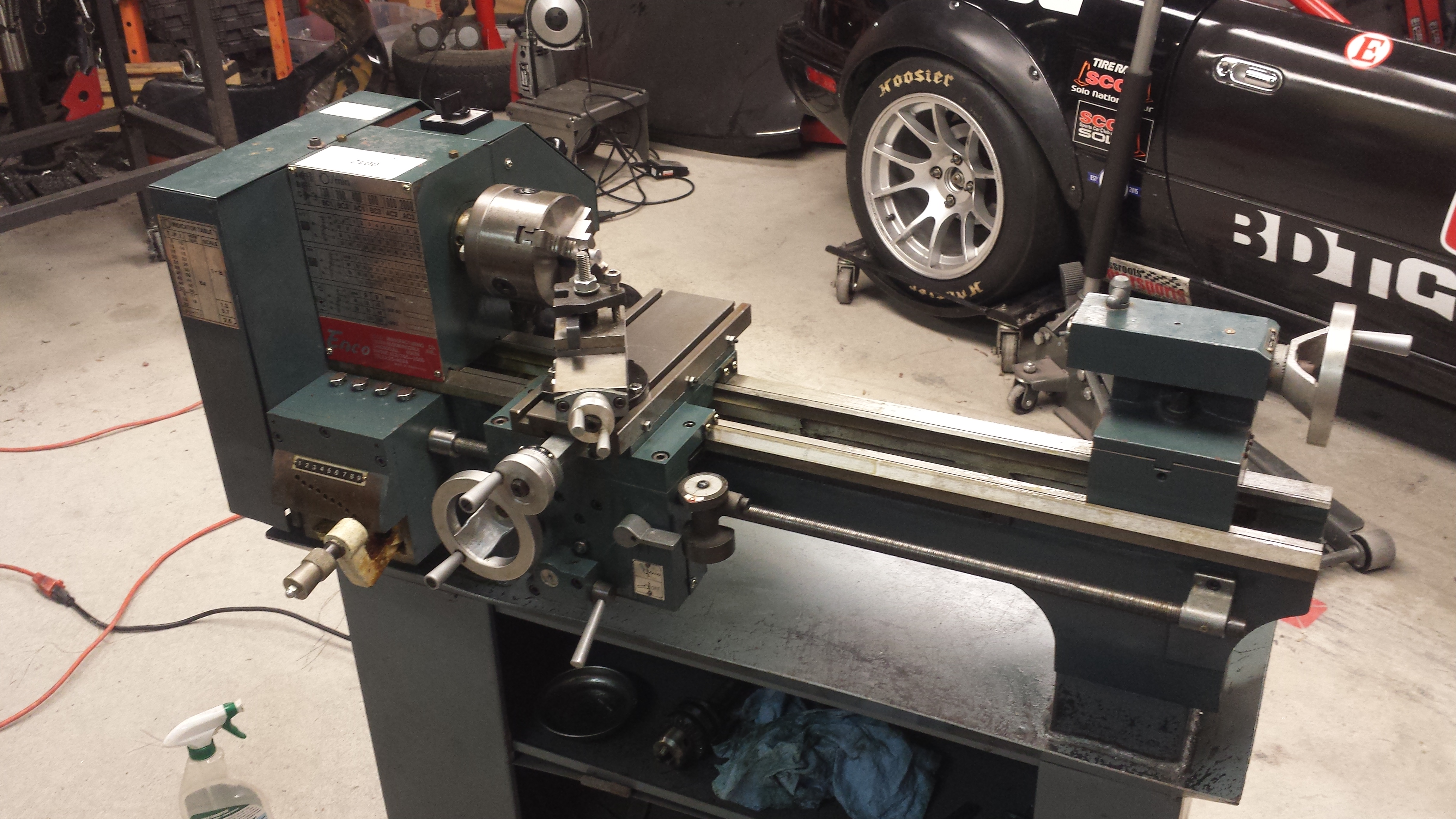 The shear pin for the lead screw was pretty well boogered on removal. Thankfully, I had this handy-dandy lathe with which to make myself a new one: 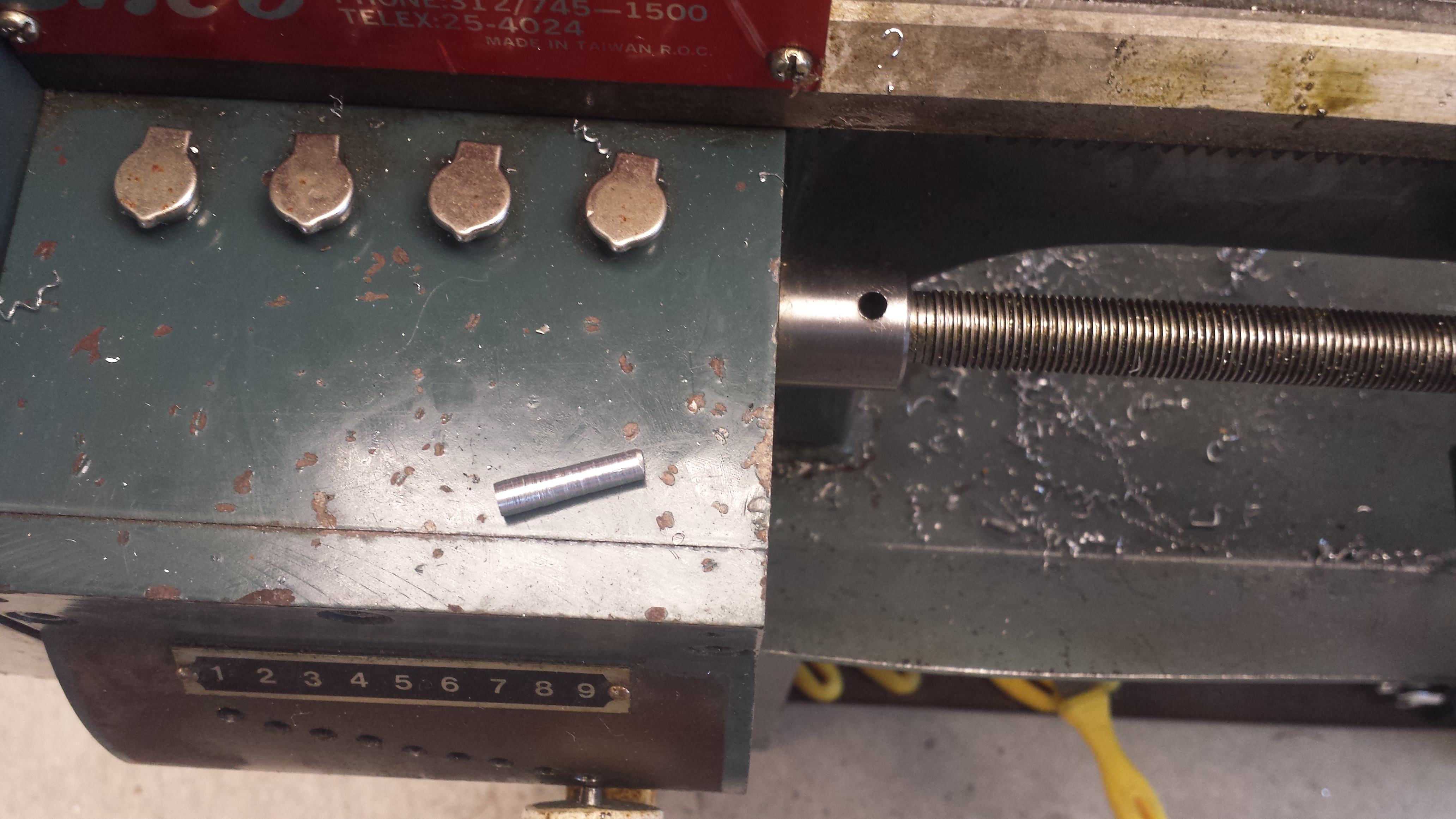 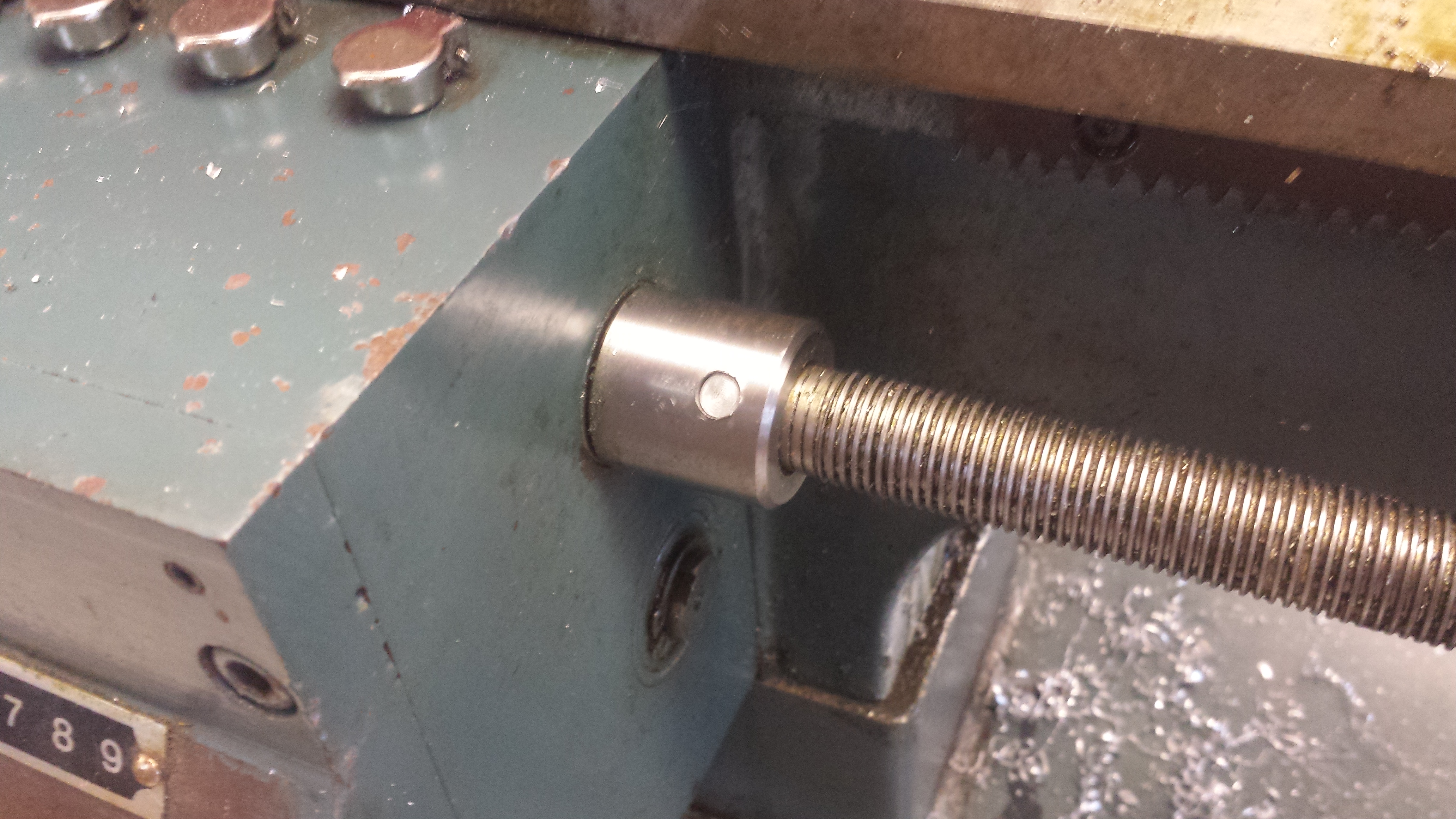 After getting it back together, the cross-slide feed was still really sticky. I thought maybe the feed screw was bent (because it’s super skinny). I took it all apart and everything measured fairly straight, so I dove a little deeper and found that the graduated ring was binding up against the screw’s housing at the same spot on every rotation. If I took the ring off, the handle turned perfectly smooth. 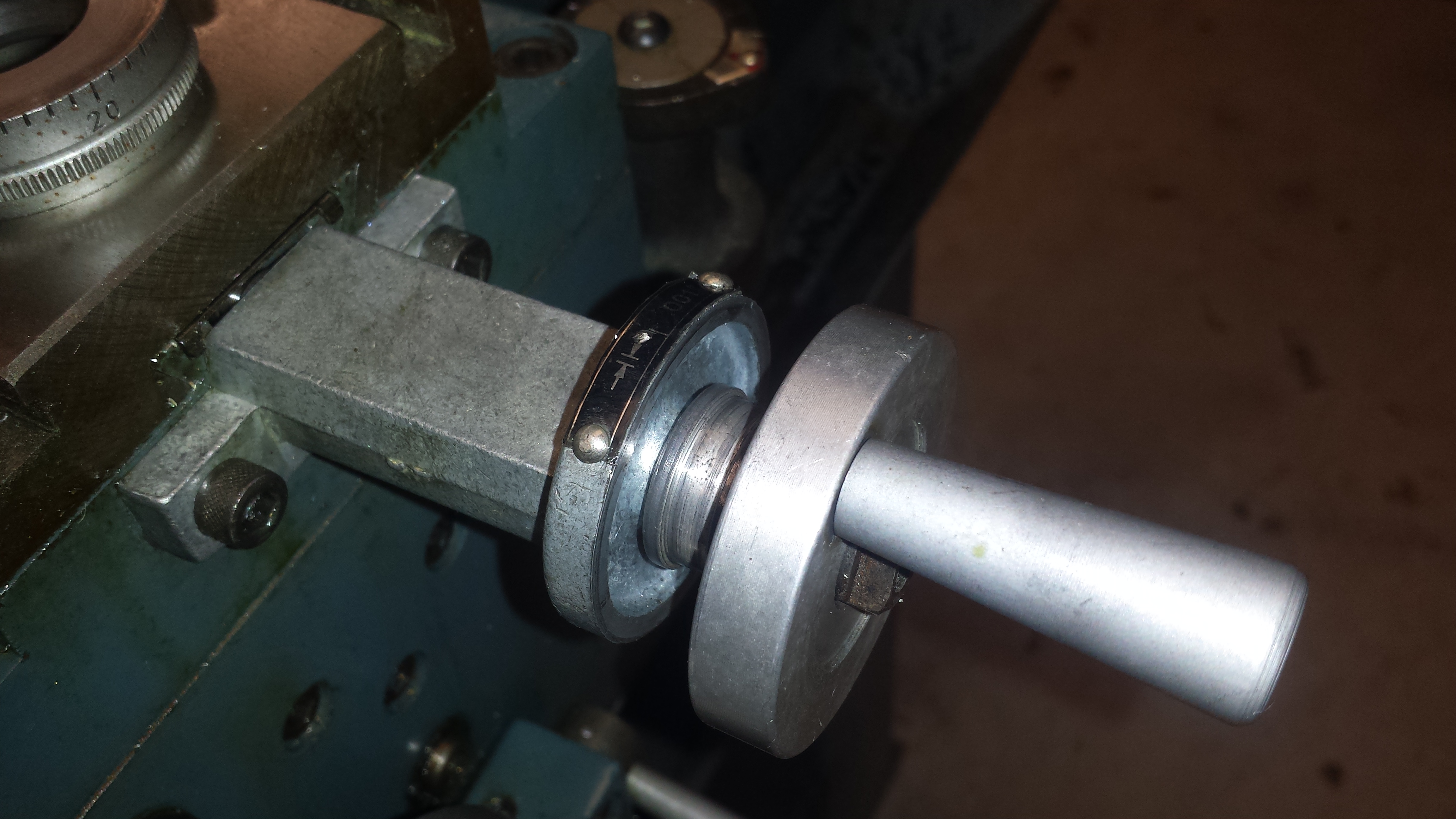 I could make it loose enough to work but then it wouldn’t hold its position, or I could make it tight enough to hold its position and it would be impossible to turn through that rough spot. You can sort of see where it’s interfering here, on that dark ring. I broke out the emery cloth and a fresh can of elbow grease and spent a few minutes knocking it back just enough that it turns nice and freely now. 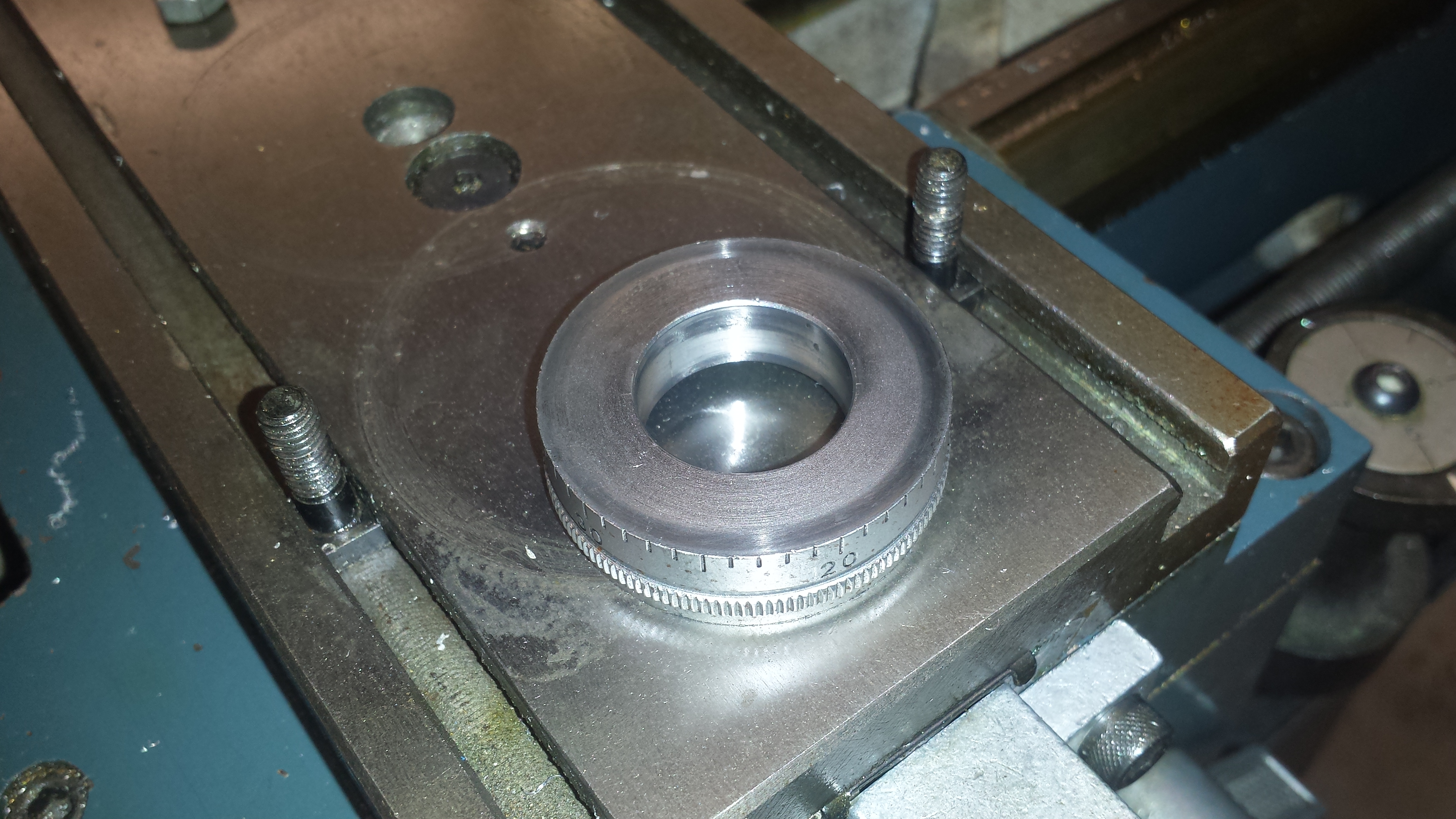 Next, the tail-stock’s alignment was an unknown quantity, so I wanted to take the time to center it up correctly with the bore of the chuck. Usually you’d use a couple of tapered centers for that, but, well, I don’t have any of those yet. I turned a center from a piece of scrap steel rod, and then used a centering bit in the tail-stock (which also comes to a point) and used those 2 points to get it trammed in. It’s probably not *perfect*, but it’s well within good-enough range. 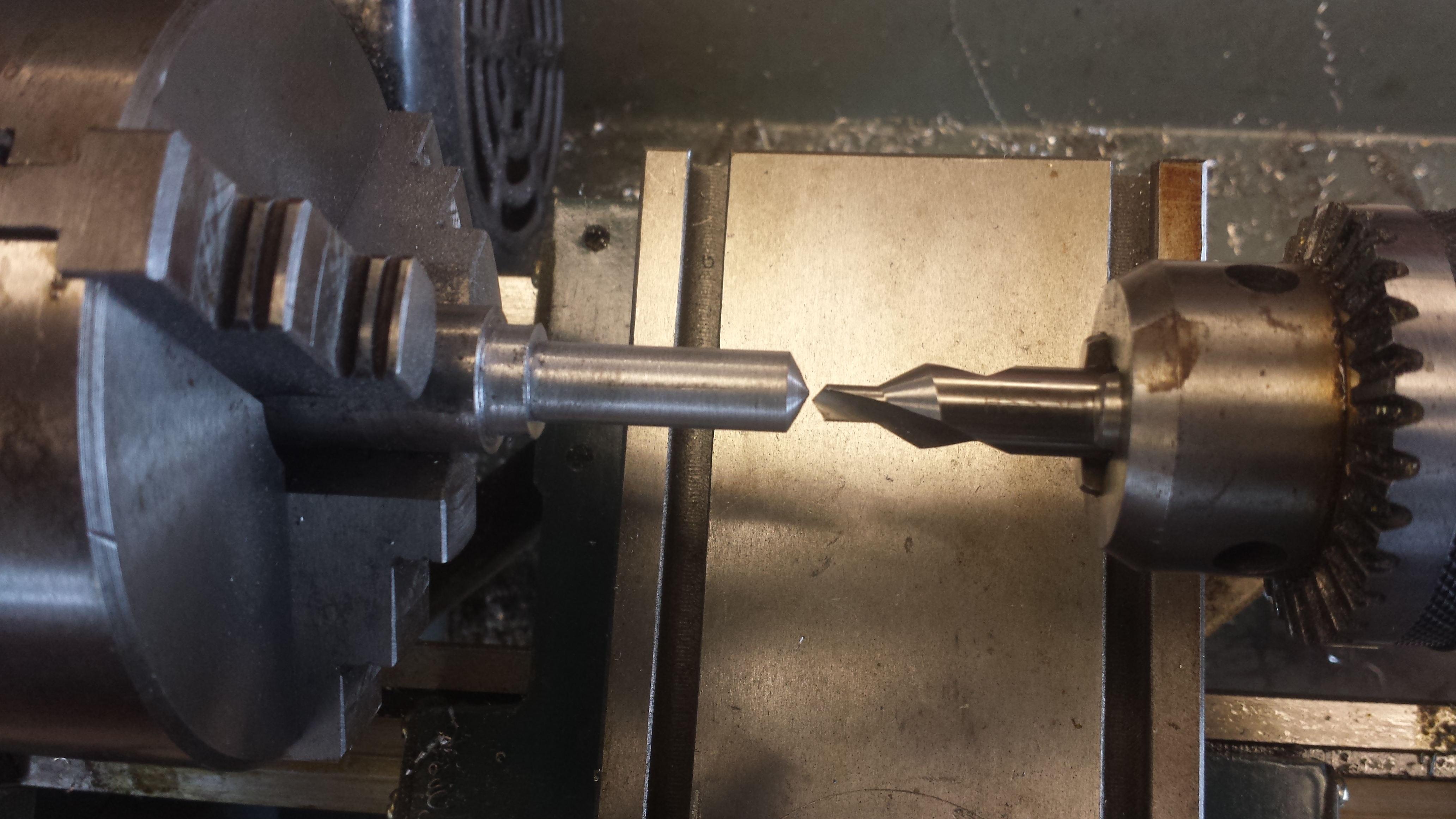 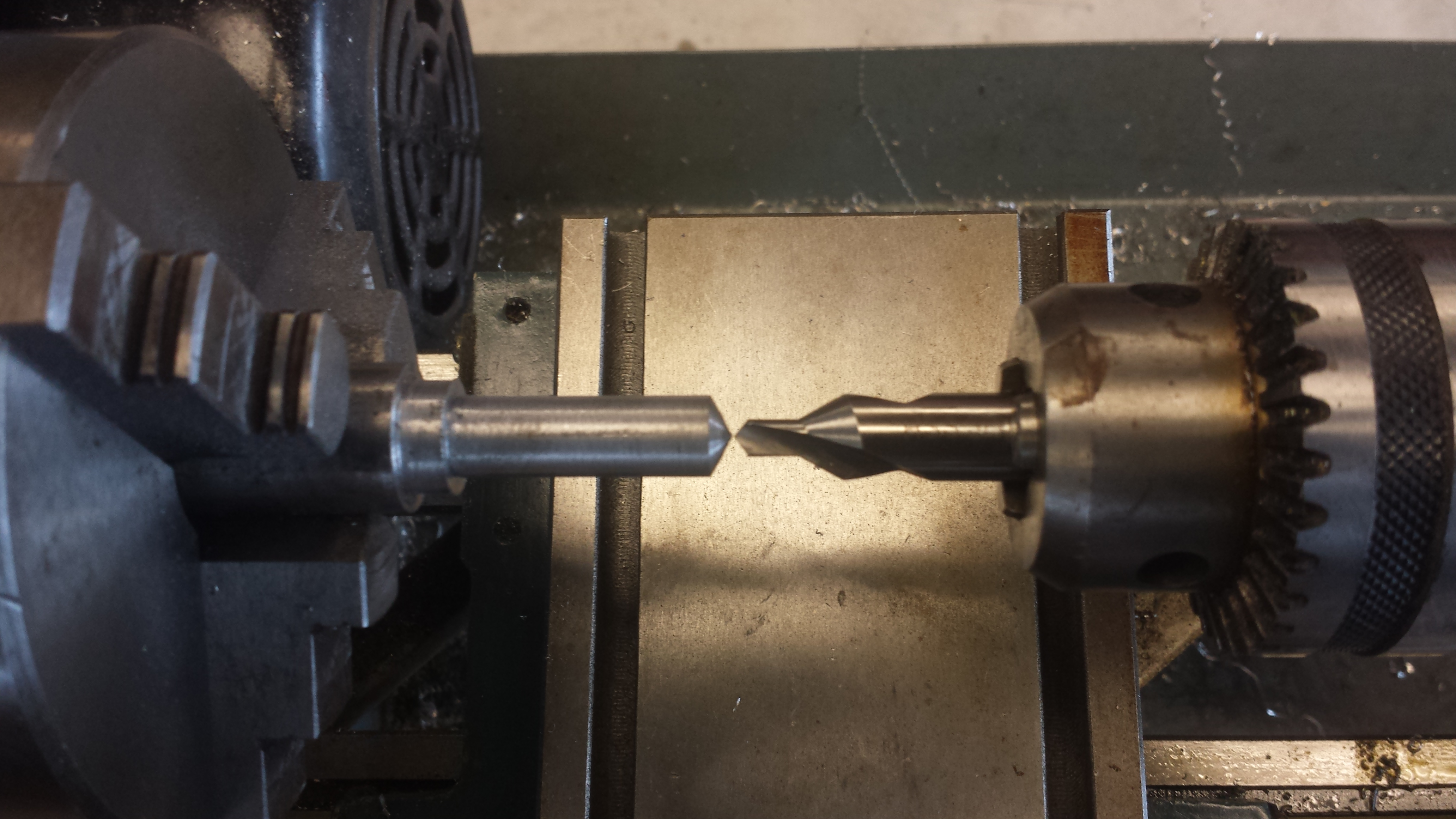 Next week, the quick change tool post arrives. I’ll need to make a spacer for that, get the tools aligned, and get some feet made for this thing. After that I’ll…probably… have motivation to clean it’s spot in the shop, and then, at long last, put this thing to work.