It’s time. It’s finally here. With the Chasing the Dragon Hill Climb complete (and successful beyond my wildest dreams, making the fastest pass by a Miata ever), it’s time to put the bigger, lighter Honda motor in the race car.

Unfortunately however, things got off to a rocky start. Prior to the Hill Climb I started test fitting things to the V8Roadsters subframe and all was not well.

The first bit of prep was to get the steering rack on the subframe. So as to not lose the NB rack bolts I figured I’d put the bolts into the threaded holes in the subframe for safe keeping.
3 out of 4 had powder coat completely boogering the bolt holes. Adding to the fun, the thread pitch of those holes is M12x1.25mm, which is the one M12 tap I don’t actually have in stock.
A quick Amazon shopping trip and a couple days later, the tap comes in.
After chasing the threads in the good bolt hole and 2 of the 3 bad ones, I realize 1 of the engine mount brackets completely blocks access to the 4th. Improvise and overcome right?

That’s not great, but a pretty small issue all things considered.
Then a friend (thanks Nick!) who has experience with V8R subframes suggested I check the rest of the holes, and that’s when the big problems started. I could not get the upper control arm bolts through the bores at all.

I went as far as creating a custom tool with some rod and sand paper to grind the powdercoat out of the bores, thinking it was a similar issue to the steering rack bolts, but no, the bore was shaped like a banana. I still don’t know if it was overheated when it was welded to the frame or what, but it wasn’t great. And given that it left the shop like that, their QC wasn’t exactly giving me warm-fuzzies either.

To KMiata’s credit, they handled getting a new one shipped out and return shipping for the bad one to V8Roadsters to ‘investigate’. Once we determined just how bad the problem was, I had a new one in hand a few days later.

And check it out: bolts that go in without any hammering or clearance! What a concept!

Next it was time to get the steering rack prepared. Because of tight clearance to the oil pan (…a recurring theme…), all the hydraulic fittings on the steering rack housing had to be cut off. I used a 3/16″ rivet and some JBweld to seal the holes.

Next I discovered that Mazda changed the design of their inner tie rod lock washers. The old style washers sat on the OD of the tie rod’s threads, so it was flat between the rack and the tie rod. The newer style lock washers have a shoulder that goes on the over OD of the rack. That prevents my steering rack limiters from seating all the way at the ends of the rack, taking another 3/8″ or so of travel out of the rack.

I corrected that by throwing the limiters in the lathe to put a counter-bore in the ID to clear the washer on 1 side, but still ride nice and snug on the rack:

Time to start disassembling the car:

Given that I’m going to have to install and pull the drivetrain several times over the course of the coming build, I also wanted to remove the upper radiator support (which doesn’t actually support the radiator in an NA Miata), and make the front bumper bar into a bolt-on piece. As you can see, the engine and transmission will come out of the car practically straight:

A little bit of cutting and welding later, and the front bar bolts to the chassis legs:

It’s so much easier pulling the whole thing as a unit:

With the rack put back together, I could finally put the subframe in the car. Unfortunately there’s evidence that my car has been in a minor front-ender, which appears to have slightly tweaked the subframe pickup points. Because of that, I had to pat my head and rub my tummy and figure out which order the bolts wanted to go in so that all the holes actually lined up, but once I figured out which hole was the furthest out and started there, it all bolted in.

I found a couple of bad ball joints during disassembly, so I called Mazda Motorsports and re-loaded the parts cannon to get good parts on board, but once that was done, everything bolted up nice and easy (including the steering rack)

Next, on to the KMiata specific engine mods.

HAHAHAHAHAHAAAAA!
Man, it’s so good. The adjustments are pretty darn sensitive. We spent the first 6 or so runs dialing out a little bit at a time until we got to the point where the previous spot was better and dialed it back up that notch.
Video won’t show much, but being able to make fine adjustments was a nice change of pace… it went from having to be muscled around the course to finally being able to have soft hands on the wheel.

All in all: if your class allows it, or if you’ve got a street car without PS, this is a great bit of kit 😀

It’s been a long break, but after getting absolutely every possible run out a set of Hoosiers, I wanted to try another readily available set of tires. Around the same time, Paco Motorsports’ trick adjustable Rear Upper control arms went on sale with some factory seconds (ie: cosmetic blemishes).

I’ve coveted them for a while because the stock rear adjusters tie toe to camber, and these allow you to do 2 really interesting things:

It’s one of those things that gives you plenty of rope to hang yourself with, but if you take your time and plan out what you’re doing (and take lots of measurements), you can do a lot of good as well. Which means I’m probably going to end up metaphorically hanging from the end of that rope… 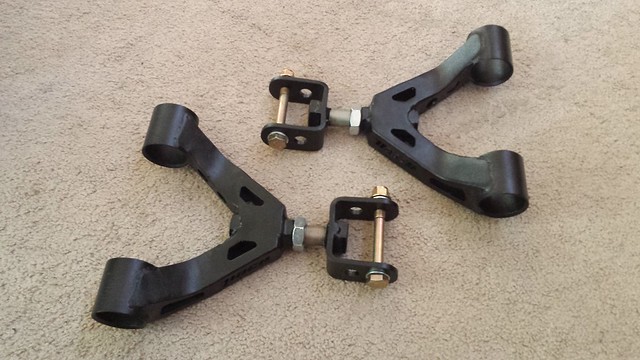 There were some concerns about the strength of the threaded components, so I took a few measurements. The gist of it is: the shaft is 3/4″ diameter, and it is a fully threaded sleeve on the control arm portion so there’s thread engagement far beyond the front and rear “nuts” it looks like it has. Barring some weird metallurgy issue, these should be plenty strong. 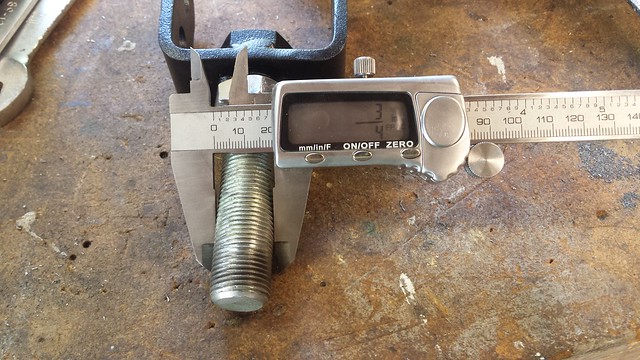 Finally installed with the car. Between the adjustable upper arm, the adjustable offset upper-outer bushing (in the knuckle) and the stock cam adjusters, there’s a lot of adjustment now built into the suspension to make (or break) the setup. 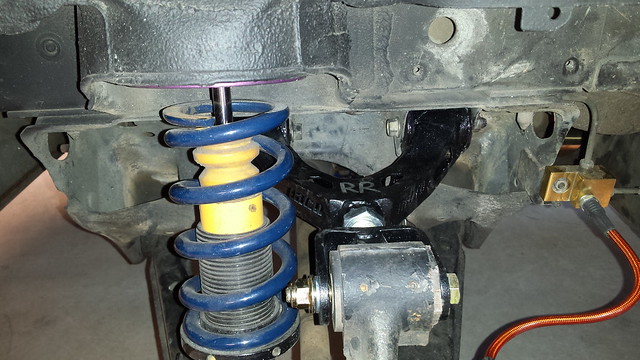 On to the tires: There is a readily available Formula Atlantic (I think?) Avon A11 compound Radial Slick in a 240/600R15 size. It’s about 1/2″ taller and wider than the Hoosiers I’ve been running. I’m not thrilled about the taller bit, as it may end up with some interference with the chassis, but the wider should be nice. And they allegedly last longer than the Hoosiers, while being as easy to get.

And finally, last night I had a buddy come by to help drink my beer and measure while I adjusted from under the car. While the last set of tires wore fairly evenly, it was apparent that the rears needed a little bit more camber, and the fronts needed to be adjusted. I think they got knocked out of alignment over a couple big bump at an event, because we found about -1.5° degrees camber on the left side and -3.5° on the right. Definitely not ideal.

After roughing in the rears to be even, I threw the “Me Simulator” 210 lbs of steel plates into the driver’s seat and we got to work. The alignment numbers I ended up on are:

Front Camber: -2.75°
Front Toe: 5mm out
Front Caster: as much as I can get away with and hit my camber number…

We’ve got an event this weekend so we’ll see how she runs, and go from there.