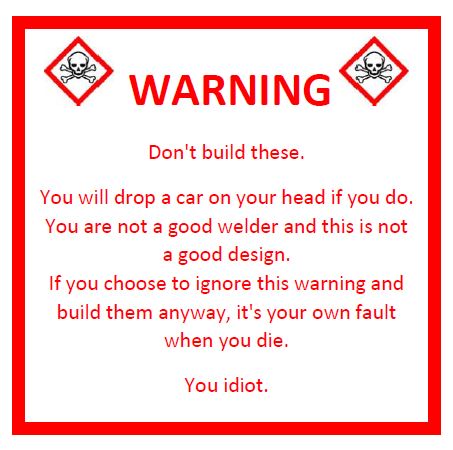 Now that the legal jargon is out of the way:

The response I got from the setup stand build has been tremendous. Several folks have suggested that they’d like plans be made available so they can build their own set, and that they’d be happy to throw a few bucks my way for the time that went into developing them. I’m staggered, because I thought I’d make a couple sets for buddies and that would be it, and that would be that.

The directions include a materials list, a cut list, some 3D modeling and photographs of the stands.

Chances are that, having built a few sets now, I may have left out a few things that seem intuitive to me just from having done it several times. Let me know if you have any questions and I’ll do my best to answer them.

If you’d like the plans, e-mail me at amaff5@gmail.com and I’ll send a .PDF with the plans.

This is very much a hobby for me, not a business, and these are super useful tools for “us people”. I’d rather more of my racing buddies have access to them than not, so I’m making the plans available for free. Hell, if we had money to burn we’d just spend $2,000 on the commercially available options and be done with it.

That said, I have put a great deal of time and sweat (omg so much sweat you guys) developing these. If you feel that these were worth it and / or want to throw a few bucks in the hat / Tire Fund for the R&D done on these, you can do so here:

Links to the original build ‘thread’: